A Book Review For BOYSTOWN Season Five by Jake Biondi 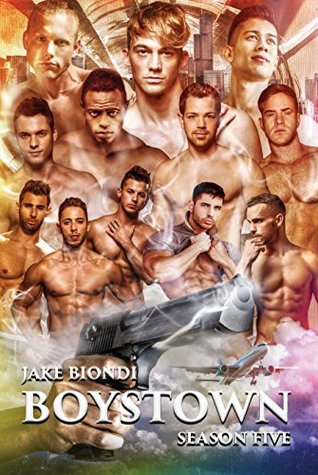 “‘They’re in the air. Everything went smoothly. After what I did to that plane, none of them will make it to California alive.’ Ben smiled as he turned around to look back toward the jet, now far away on the horizon. The passengers on board celebrated two upcoming weddings, completely unaware that their rejoicing would be cut short from the doom Ben had unleashed on them. Stars twinkled in the night sky as if welcoming the plane into heaven. The moon cast an eerie glow over the beautiful city beneath it.” -BOYSTOWN Season Four

As rescue crews search for survivors at the site of the fiery plane crash, Logan Pryce is rushed to the hospital in an attempt to save his life. At the same time, Dr. Mateo Martinez works to save the lives of two men and Joyelle Mancini copes with the shocking results of her baby’s paternity test.

While the Mancini and Ciancio families mourn the loss of family members, the past and present collide with the arrival of Camille Ciancio, a woman bent on revenge who wastes no time implementing her plan to destroy to the Mancini family once and for all. The loss of loved ones also brings former lovers together and tears others apart. Plus, the arrival of a stranger to Boystown impacts several residents in ways that alter their lives forever.

Summer in Chicago sizzles with Pride celebrations, the excitement of Market Days, a memorable ground-breaking ceremony, and an unforeseen engagement. It all leads up to a double-wedding event that brings evil schemes to light and plunges the lives of many Boystown residents into peril.

The Boys are back and there is so much going on between them. We have couples getting married and couples who break up. There are also new boys in town some stirring up the pot and others with lots of secrets.

Cole is modeling now for the Ciancio's fall line called Cio. Derek and Joyelle are friends after getting divorced and moving on to new relationships. Emmett is engaged to Max and Justin is engaged to Gino. As they get ready to get married the jet plane crashes and some of the people on the plane don't make it.

To make matters worse the Mancini-Ciancio fued is still going strong even though things were starting to look up. As usual you have your haters and your friends you can truly trust. But every couple is being tested to see if they can remain together or something else could be coming in between them.

The ending as always has me yelling at my kindle needing the next episode. These boys are like family to me and I hate to see them suffering. Some couples will make it and some couples won't. The ending had me on the edge of my seat chewing my nails.

Growing up in the suburbs of Chicago, Jake Biondi fell in love with "The Windy City" at an early age. He left the Chicago area for four years to attend the University of Notre Dame, from which he graduated with degrees in English and Business. He was awarded the university’s prestigious William Mitchell Award for Playwriting. Upon graduating from Notre Dame, Biondi returned to Chicago where he attended and graduated from the Loyola University Chicago School of Law. He has been living in Chicago's Boystown neighborhood for over 20 years.

While studying literature, Biondi became a huge fan of Charles Dickens whose novels were originally released in installments, each ending in a cliffhanger to keep readers coming back for more. Because of his love of those novels as well as television dramas such as Dynasty, Knots Landing, Dallas, and Revenge, Jake Biondi decided to create a serialized saga for contemporary audiences. Thus, the BOYSTOWN series was born.

Biondi began BOYSTOWN in June of 2013 as an online story and intended to release one "episode" online per month, each ending in a cliffhanger. The story became so popular -- and the online reading audience grew so quickly -- that people from all over the country began to email him demanding to know what happened to their favorite characters and wanting the episodes to be released faster. They also had suggestions for future storylines. Excited by and grateful for his readers’ responses to BOYSTOWN, Biondi began to write and release installments more quickly.

Because of the popularity of the book series, fans have suggested that BOYSTOWN be turned into a television series. Biondi recently completed the TV scripts for the first season of BOYSTOWN and hopes to bring the series to television in the very near future.

So nice article, glad to read this post, thanks so much!

Latest news is the word which is searched by mostly all users coming on internet for any type of news updates of for any type of breaking news in case they missed some important news during their busy hours.
So in order to gain all the world news updates, people now a days search for latest news oon google and tends to read the information or news they want to or desire for.

This is the most interesting information and fit into our topic.