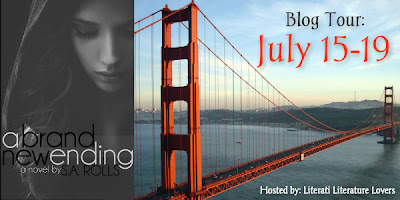 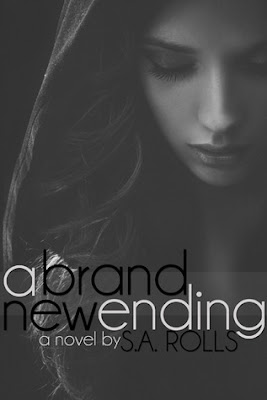 Phoenix Harper never imagined her life would come to this: A life not worth living anymore.

After a failed suicide attempt, Phoenix is sent to be observed at a local psychiatric hospital. There she meets Braeden Harris, a hospital aide with his own haunting past.

Not long after their first encounter, they feel an unexplainable pull towards one another. Will fate bring them together, or will outside forces tear them apart? 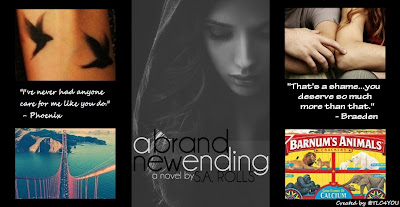 Excerpt from A Brand New Ending:

"I don't want to go anywhere, Braeden. Wherever you are is where I want to be."

I think my heart does a back flip. "You have no idea how happy that makes me, hearing you say that."

She gives me a sly smile, her fingers playing in and around mine.

"Can't describe how amazing this feels," she speaks. "I've never had anyone care for me like you do."

"That's a shame," I respond quickly. "You deserve so much more than that."

I lean over her so that our faces are close but I make sure to do it gently, afraid that she might retreat from my touch.

"Yes," I say softly as our eyes are locked on each other.

We hold our position and I can tell she is nervous, but I want her to make the first move. I made the mistake of pushing it on her the first time and I won't be doing that again. I can feel the heat of her breath on my face, its oddly intoxicating. But I hold still. I start to count the number of my heartbeats when I suddenly feel force against my lips. I hold back the smile, my hand coming up to cup her cheek.

I start to move my lips against her, the waves of ecstasy flowing through my body. After a second, her lips start to move in unison with mine. I've kissed lots of women, but it's never felt quite like this. I don't know how long it lasts, but I refrain from sticking my tongue in her mouth, fearing that may be too much. I then swear I feel her moan in my mouth, and it's the most incredible fucking turn on I have ever heard in my life. She must have realized it too considering she pulled her lips off mine, her hands coming up to her mouth. 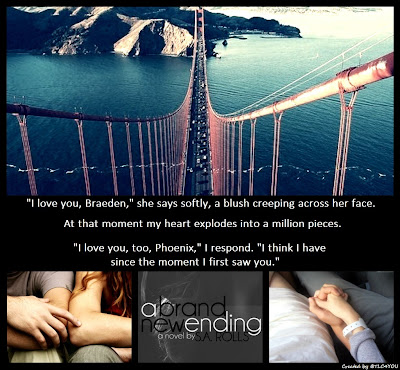 Where to start this review.... I will start by saying this is the author's debut book and holy shi$ she does an EXCELLENT job! The book had me and the ending holy mother of God I was like no way.... what... where... when.... how.... HOLY SH$ this can not be happening! Man I can't even formulate sentences to make any of this make sense. I was totally blown away by this story and what is more shocking was that ending man the ending I loved loved loved it! So enough crazy talk let me give you some background of the story.

We meet Phoenix who has had a rough life and her only way out of the pain and the suffering is to kill herself. After her suicide attempt her father sends her to a psychiatric hospital to get better. While Phoenix is there she meets a student doctor Braeden and together these two help each other out. I have to say that the insta love thing that happened between them and the insta connection and pull they felt towards one another was not cheesy or stupid but it really worked for them. Together they were able to help each other out with the demons they suffered from.

Phoenix has her own pain and hurts and past and so does Braeden but together they help each out and realize they can get past all the bull sh$ and have a life worth living. Once Phoenix gets out of the hospital reality sets in for her and Braeden and they are wondering if they will make it together. Can Phoenix ever heal from the hurt she has had to endure? Can Braeden heal from his past? Will Braeden be with Phoenix when she leaves the safety of the hospital? This is such a roller coaster read and when you get to the end you will be completely shocked at least I know I was! 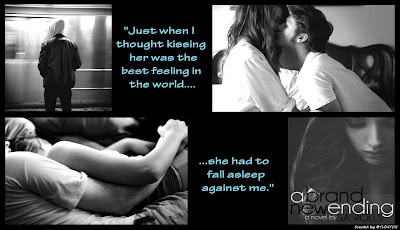 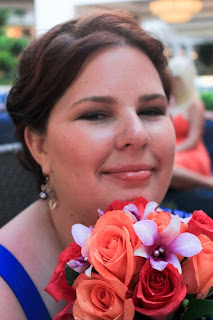 S.A. Rolls is a native of the Bay Area, where she attended culinary school and obtained a degree in baking and pastry. When she is not baking, she spends her time reading and writing. Stephanie reads anything – from biographies of her favorite president to the most popular YA series. Inspired by her surroundings, she has written her first novel, based in San Francisco, her favorite city. She currently lives with her boyfriend and their five-year-old pug.

Lots of baking. And lots of coffee, Red Bull and sleep. When I am not writing I am working as a baker/pastry chef. I am up very early in the morning and early to bed (usually)

2. Who or what inspired you to become a writer?

I was never into creative writing when I was younger. I also wasn't much into reading. I think a lot of women can agree with me when I say the Twilight series changed my life. When I entered that fandom I stumbled into the world of fanfiction and the incredible writers that appeared there, and one day I decided to take a chance.

3. Do you remember the first thing you ever wrote?

Probably a poem I wrote in second grade about how much I loved my mom. My mother still has it, and it's full of grammatical errors.

4. Is there any particular author or book that influenced you in any way, either growing up or as an adult?

Well I definitely have to thank Stephenie Meyer's for creating the insane life draining series. Something in my definitely lit inside me after that. As I read more novels, both Tahereh Mafi and JM Darhower are both authors who I've come to adore.

5. Where do you get your ideas from? Do they come to you or are they inspired by true events?

All of my story lines have been inspired by something around me, a song, a picture, an online video, or personal experience. Without giving away the storyline, one scene from A Brand New Ending is inspired by a real life heartbreaking event.

6. Do you work with an outline or just write?

Usually when I start a new story...I have a single thought or idea. I usually spend the next few days thinking of bullet points of sorts. Main twists and turns or general direction I want the story to take, but the minor/in between parts are definitely "write as I go" type writing.

7. Do you ever experience writer’s block? If so, how do you get out of the funk?

What author hasn't experienced writer block? It's one of the few annoyances of being an author. It took me a long time to understand, but walking away is the best. Forced work doesn't equal good work. Sometimes it’s a day, sometimes it a week. But one of the best things is when you get really excited to write and your fingers can't type fast enough.

It really depends on the day. Sometimes I can concentrate best with my headphones in and music on. Other times, the littlest sounds annoy me and throw me out of my state.

9. Can you tell us about your challenges in getting your first book published?

To be honest, I never planned on writing a novel. And I never considered writing anything that anyone would be interested in reading. But I've had some amazing readers, and I am SO grateful for each and every one of them. But it's definitely not for anyone with thin skin. This day and age, anyone can be an author. I never tried to get published through a company and self publishing is hard. You are your own marketing team. You are your own formatting and cover design team. It is a lot of time and effort. You HAVE to be determined.

11. What inspired A Brand New Ending?

I can actually pinpoint the day that the general idea for ABNE came to me. I had a friend who was an actual psychiatric hospital aid worker. Her stories were always sad, yet incredible. I guess I could say that's what sparked it.

From the quote that is actually at the beginning of the novel. I felt like it was exactly what the whole novel was trying to portray. So I guess I could say I borrowed it.

13. What was your favorite chapter (or part) to write and why? Hardest?

One part that always stood out to me was subway scene. It was fun to write Phoenix coming out of her shell. For someone with anxiety, a crowded and small space is like a living hell. To have someone there that not only cares about you, but is willing to protect you is an amazing feeling.

14. Which character speaks/spoke the loudest to you?

Rain. She was so much fun to write. For someone who has lived through so much and still is never knocked down, her outlook on life is admirable.

15. Which of your characters would you like to meet in person and why? What would you say to that person?

I have to choose just one?! ;) I think I would have to say Braeden. While Phoenix has suffered a lot in her life, she was lucky to have such a loving father during her youth. But Braeden has dealt with pain and loss from a very young age. I would probably tell him that he is an amazing man and to keep on loving Phoenix. She needs him and he needs her.

16. Is there a message in A Brand New Ending that you want readers to walk away with? If so, what is it?

While I have never personally dealt with suicide, I want people to take away that there is always help. When you feel like you have nothing left, there is always someone out there that loves you and cares for you. Give life a chance.

A girl who's given up. A boy who desperately wants to show her that her life is worth living. But does she want to be saved? (this was really really hard!) ha

18. What projects are you working on now?

I have started a new novel. It is in the early stages of development but will be told by a young girl named Alina who was born with a large birthmark on her face.

For as long as she can remember, people have seen the mark, not her. Kids in school can be cruel, a world full of bullies for those that are not considered "normal." Her life is the same everyday...until she meets Hunter. A boy who never lets anything or anyone get him down.

Unfortunately, that's all there is so far. :)

GIVEAWAY:
There will be 6 lucky winners!
5 e-book copies of A Brand New Ending (Open international) and
1 GRAND PRIZE of a signed paperback copy, bookmark, box of animal crackers and a mini book charm (US only) 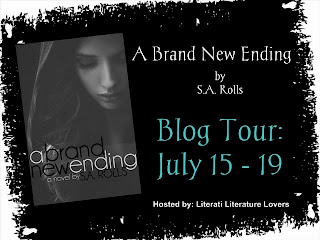