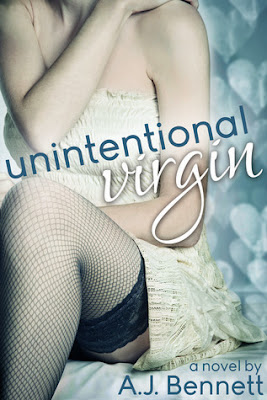 One night, her good friend Eva brings her to an underground club where Karma meets a tattooed bouncer. He’s far from the clean-cut type she normally falls for, which makes her think this finally might be the night she crosses the threshold of womanhood.

Excited, she goes home with the bouncer named Jax and as always, her dreams crash down once again. Jax cannot believe she is willing to give away her virginity to a stranger she met at a club. As the only son with five sisters and a widowed mom, he can’t morally go through with it, even though he’s never been more tempted in his life.

Unwilling to let her walk away he strikes a deal. Karma has to spend three weeks dating him and then decide if she wants to have sex or walk away.

A tall, muscular bouncer covered in tattoos, with inky black hair that looked a little too shaggy, a strong jawline, and the palest blue eyes Karma had ever seen gave them a once-over. He exuded self-confidence, masculinity, and perhaps a hint of danger.

“IDs.” His voice was deep and sent a shiver down her spine. She had a feeling he would never be caught in a situation he could not control. She envied him for that.

With a quick cursory glance at the front and back he handed them back. “Have fun,” he grunted.

“You too,” Karma said. She forced a smile and grabbed her ID from his huge hand. She was surprised to realize her fingers were trembling.

“Would it kill him to smile? Why do jerks have to be so freaking hot?” Karma mumbled as she walked away.

“Heard that,” the bouncer said in a deep, smooth voice.

Eva nudged her with her elbow, her eyes wide.

Karma shrugged and turned back, waving while flashing him a smile before they pushed through the large double doors. He really should lighten up.

Why was he stopping? Her stomach clenched. She tried to still her frantically beating heart. Her mind screamed, don’t stop. Please don’t stop. She needed this experience. She wanted it with every ounce of her being.

“Don’t stop.” She hated the pleading she heard in her own voice.

“Karma,” he said as he closed his eyes and leaned back on his knees. “Tell me you didn’t go to a club to pick up a guy for your first time? What the hell…” He ran his hands over his face.

Karma was shocked by his reaction. “You sound like my father.”

Jax pulled away as if he’d been bitten by a snake. The look on his face was of total disbelief. Gone was the look of lust in his eyes. No. No. No. They were so close. Why did she have to say anything? She hadn’t meant to, it just came out like word vomit.

“You’re really a virgin?” He ran his hand through his inky black hair.

“Yes! I’m a virgin. Everyone has to lose it at some point.”

“My mother would kill me if I took a girl’s virginity on a one-night stand.”

“Why are we talking about our parents right now? We were about to have sex.”

A.J. Bennett lives in Nashville, TN with her husband and bulldog. She’s addicted to coffee, popcorn and books. Becoming an author has been a lifelong dream, and she’s extremely excited about her debut novel Now or Never.

“It blows my mind you can look like you do and not see it for yourself.”

Her throat tightened. Why did he keep saying things like this? Couldn’t he just drop it? “Please, stop.”

He stepped closer and dropped his hand to the swell of her hips. “I love your hips and the way they fit perfectly in my hands, your nose gives you character, your thighs… Jesus, I can’t even think about them without getting a hard-on, and your eyes make my heart race like a schoolboy with his first crush.”

Karma stood on her tippy toes and went in for a kiss, but Jax pulled back, laughing. “You’re not getting out of it that easily. We’re crossing another one off your list.” He pulled her down the stairs into the pouring rain.

“You’re crazy, Jax!” She laughed, tilting her head up and spinning in the rain like a five-year-old. When she came to a stop she looked up and Jax was staring at her so intently it took her breath away.

He yanked her toward him, and his hands slid down her back to the curve of her waist. His legs widened as he pulled her closer, and she could feel the hard ridge of need through his pants. “You’ve been driving me crazy all evening,” he said roughly.

Wild desire tore through her body as the rain pelted down on them. Jax bent his head and his lips covered hers. A moan of pleasure escaped as her hands slid up and gripped his shoulders. The response to his body was overwhelming. She was trembling and it had nothing to do with the cool rain.

Jax pulled her tighter, as though he never wanted to let her go. One of his hands released and cupped her breast, his thumb caressing her rigid nipple. A shot of desire ignited between her legs and her breathing became ragged. The burning pleasure was instant and spread throughout her. Her body was ready for him, moist, warm, and drunk on desire.