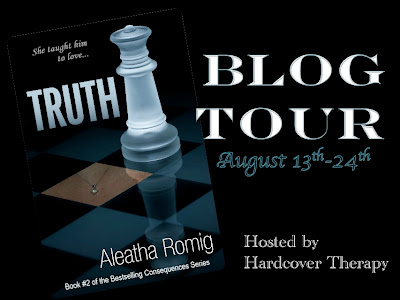 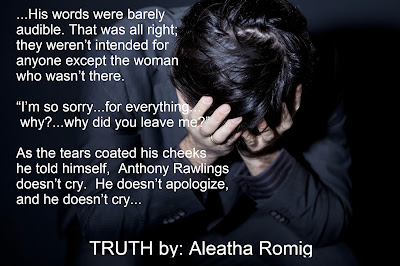 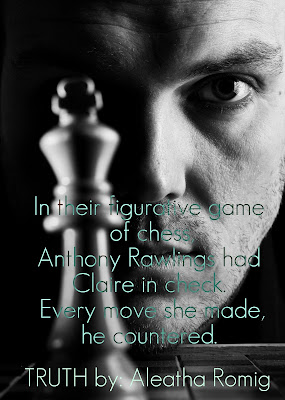 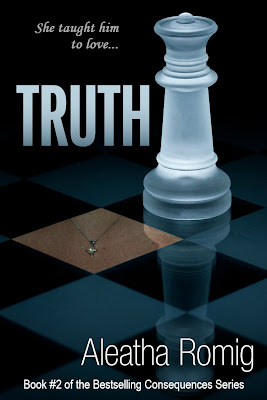 Claire Nichols endured the CONSEQUENCES of Anthony Rawlings’ vendetta. When she first arrived to his home, her goal was survival. Through strength and compartmentalization Claire captivated her captor. Her resilience in the face of his rule threatened Anthony’s well developed plan.

Domination became desire and power turned to love. Their passion and adoration in a world of opulence appeared perfect. Yet, reality was a roller coaster of emotion. Claire’s world teetered on the edge of sanity as Antony monitored her every move. When given the opportunity to flee, Claire drove away. A fateful decision which set a well laid plan into motion.

Will it be that easy? Faced with freedom from her past... can Claire seize it? Can she build a new life, mend her broken spirit, become the woman she once was, and seek her own revenge? Or is it all a game? And does the game master have different plans? How does Sophia Burke fit into the puzzle that is Tony and Claire?

Will her presence affect the future of this well esteemed man? Can he dominate twice? Is that his goal? TRUTH continues the tumultuous saga of CONSEQUENCES, introduces new players, and uncovers more intrigue. Aleatha Romig skillfully weaves past transgressions through current deception to create a fervent world of obsessed desire.

In this reality can an all-consuming relationship survive? When buried sins are discovered they threaten not only Tony and Claire’s future -- but their very lives! Will the TRUTH be revealed in time?

5 of 5 Truth and Consequences

Okay I got that out of the way first because after I read Truth I was left speechless. I mean I read a lot of books but this series is one of the craziest series I have read and every time I think I know where this story is going I am taken in another direction. I mean I was just blown away by the things that unraveled in this story and just when my heart couldn't take no more BAM Aleatha would slam me with something new and I would be screaming and crying at the same time. Man talk about roller coaster of a ride I mean this is a mind fuc* like no other. This book is definitely A MUST READ!

Claire has endured so much in such a short amount of time and she has learned to survive and endure what ever is thrown her way. When she first arrives at Tony's house she is in ultra survival mode but then things start to change and she decides she will do what ever is necessary to get away and start a new life for herself. Only thing is that at some point in this twisted relationship Tony started having real feelings for Claire and Claire started to have real feelings for him. Claire's desire to live and her resilience to Tony's requests and behaviors toward her only make Tony care for her more. Then Claire gets an opening to run and she runs away in the hopes of starting over and healing from what she has had to endure.

Once Claire is free things start to get a little crazy because she gets information that rocks her to the core. The buried secrets and lies come out and the house of cards are starting to fall. Who will walk away unscathed in all of this? Will Tony get Claire back and have a normal relationship or will Claire be gone for good? Truth is like nothing I have ever read before and I can't wait for book three. I need it like yesterday because as the story was unfolding there were so many questions I had and I need answers dammit! I loved loved this story and I can't wait for book three! 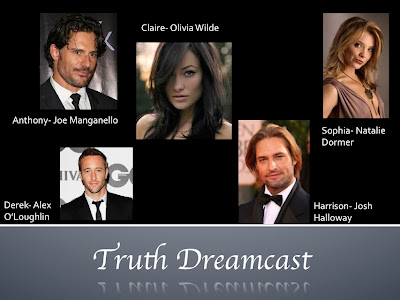 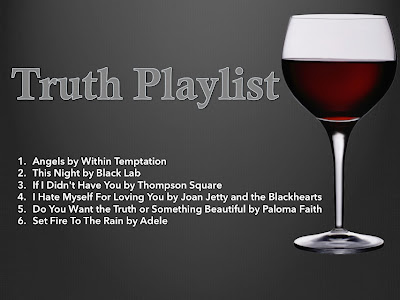 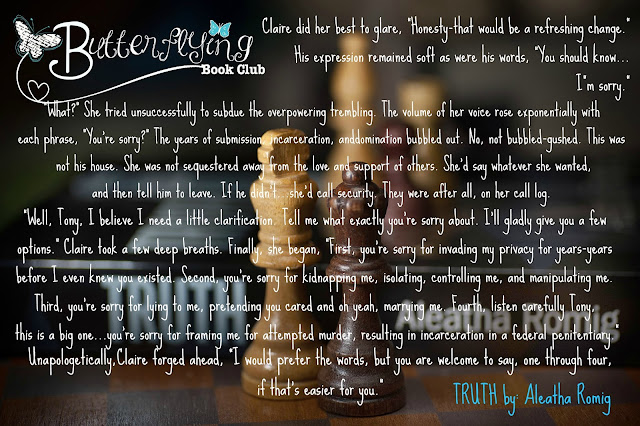 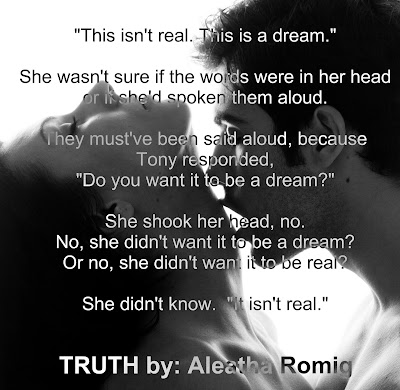 Quietly, she moved next to him and touched his elbow. Lost in thought and startled by the contact, he turned his gaze to her. She watched as his blue eyes devoured and his expression morphed. She was only inches away, her face clean of makeup and tears, her hair brushed, and wearing a silk, floor length, light green nightgown.

She remained motionless, nervously awaiting his response. When he didn’t speak, she tried for levity, “You’re awfully tall to sleep on that sofa.”

Keeping his eyes fixed to hers, he replied, “I was thinking the same thing as I put the blanket there.” His hand gently went to Claire’s shoulder, teasing the delicate spaghetti strap. She closed her eyes and exhaled, causing her breasts to move as her lungs deflated.

In unison, they stepped forward. Her nipples hardened as they brushed the silk nightgown and pushed against his hard chest. They’d been close to this numerous times, always stopping before making the ultimate leap.

Claire knew the consequence of her clothing choice. She had shorts and t-shirts for her morning work-outs. If she’d chosen that for her sleeping attire, she’d have sent an entirely different message. But she didn’t. Her decision wasn’t made hastily; she’d been debating it for weeks.

Harry’s voice resonated deeper than usual, “You’ve had a long night. Don’t you want some sleep?”

Her body shivered with anticipation, and her response came breathily, “Eventually.”

He pulled her petite frame to him. Within his embrace, her body became liquid, molding against his. “Are you sure? I didn’t come here for this.”

She nodded, smiling a shy tight lipped smile and wrapping her arms around his muscular torso. “I know. You came because you were worried about me.”

It was Harry’s turn to nod.

She strained her tip toes to kiss his cheek, “And, I appreciate your concern.”

He lifted his brows, “So, this is your way of saying thank you?”

Claire gazed through her lashes, “No. I said thank you, I think. This is what I want.”

With only a moment’s hesitation, he took her hand and led her toward the bedroom. Her insecurities faded with each step. When they reached the threshold, Harry stopped and asked, “Are you letting me in, or pushing him out?”

Claire’s smile faded as she contemplated the question she wished he’d never asked. Feeling the warmth of the hand that encased hers, she replied honestly, “At the risk of losing you to the sofa, I don’t know.”

He reached down and scooped Claire into his arms. She giggled in surprise as her feet left the ground. “At the risk of sounding like a man, at this moment, I don’t give a damn. I just want to be sure you know what you’re doing.”

She wrapped her arms around his neck and spoke with purposeful breaths into his ear. “I promise I know exactly what I’m doing. It’s you and your actions I’m uncertain about.” She nuzzled his neck. “The anticipation is driving me crazy.”

His blue eyes twinkled, “Ms. Nichols, crazy is just the way I like you.” When he laid Claire upon the king sized bed her long chestnut hair fanned behind her lovely face, highlighting the intense shimmer of her emerald eyes. After kissing her sweet lips he expressed his appreciation of his observation, “You are so beautiful!”

Claire felt her cheeks blush as she lifted her head to watch Harry pull his shirt over his head. She’d seen his bare chest before, usually when they’d worked out together. Tonight she stared, thinking it looked wider than she’d remembered. The sight of it heaving with each breath, took her breath away. Happily, she replied, “I must say, I like my view, too.” Her smile flowed from her lips, to her cheeks, and settled in her glittering green eyes.

When he started to unbuckle his belt, Claire sat up and asked, “May I?” Harry nodded and watched as Claire reached for the buckle. 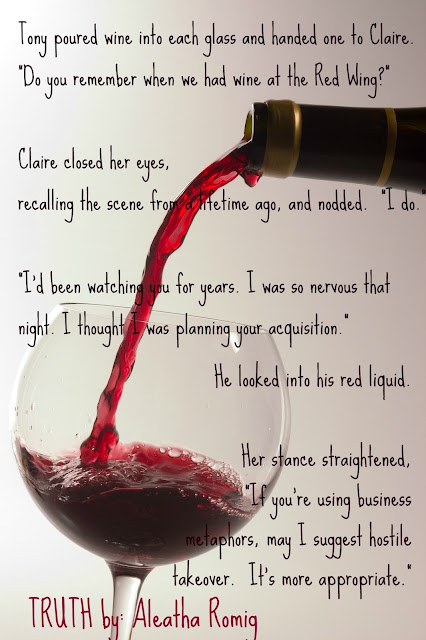 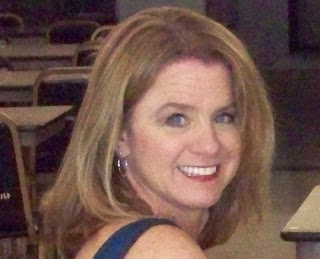 Aleatha Romig is a bestselling author, who has been voted #1 "New Author to Read" on Goodreads July 2012 - Present! She was also #9 most followed author on Goodreads - July / August 3013.

Aleatha has lived most of her life in Indiana growing-up in Mishawaka, graduating from Indiana University, and currently living south of Indianapolis. Together with her high-school sweetheart and husband of twenty six years, they've raised three children. She works days as a dental hygienist but enjoys spending her nights writing. When not imagining mind-blowing twists and turns, she likes to spend time with her family and friends. Her pastimes include exercising, reading and creating heros/ anti-heros who haunt your dreams!

Aleatha enjoys traveling, especially when there is a beach involved. In 2011 she had the opportunity to visit Sydney, Australia to visit her daughter studying at the University of Wollongong. Her dream is to travel to places in her novels and around the world.

CONSEQUENCES, her first novel, was released August 2011 by Xlibris Publishing. October 2012 Ms. Romig rereleased CONSEQUENCES as an Indie author. TRUTH, the sequel, was released October 30, 2012 and CONVICTED, the final installment of the Consequences Series, is scheduled for release in October of 2013! 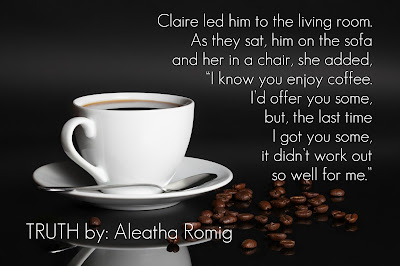 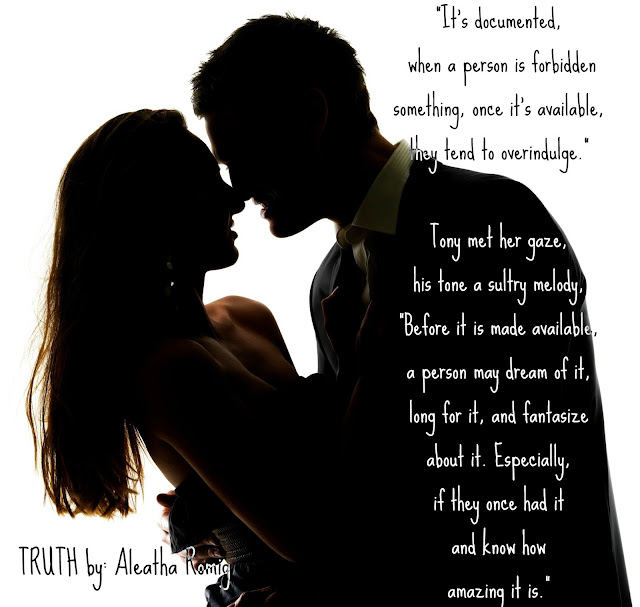 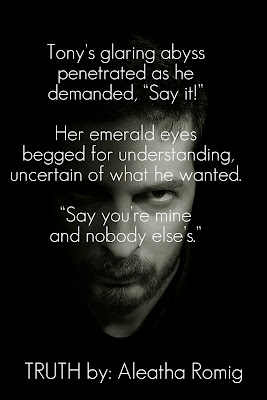 *Interview With Aleatha Romig for “TRUTH”*

I wrote about six beginnings to Truth. That’s based on the Epilogue of Consequences. I took the story many different directions. It wasn’t until I came to terms with where I wanted the story to go that I was finally able to start truly writing. Once I did, Mr. Jeff told me that no one would like it. He said the readers would be upset. It wasn’t that I didn’t care—but, I can’t write that way. I have to write what I want to write.

I’ve learned that it isn’t possible to please EVERYONE. Therefore, I’ve decided to please myself. Funny thing—the ratings and reviews are fantastic for Truth.

Tell me a bit about yourself. What was your childhood like?

I’m married to my high school sweetheart. We have three great children—two grown and graduated from college and one still in high school. My family and my writing are my two priorities in life.

I love to travel. That has been a great bonus with writing. I’m so excited to travel and meet readers. It is a very exciting time for Mr. Jeff and me.

My childhood was a long time ago. I was raised by a single mother who did her best. I always wanted brothers and sisters. I’m blessed with siblings from marriage, but I basically grew up an only child. I swore I wouldn’t do that to my child...thus three!

When did you start writing novels?

As you're also a novelist, who was or is your favorite author when you grew up and why?

I wasn’t much of a reader until I had to read “The Incredible Journey” for a report. It was the first time a book held me captive. My favorite novel of all time is “Gone With The Wind”. I honestly fell away from reading while my children were little. It was John Grisham who brought me back. I love thrillers. I love trying to figure things out and being surprised. Since then, my interests have broadened—Romantic Suspense—Erotic—Psychological Thrillers... I enjoy a wide range. 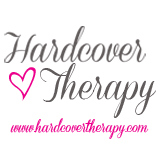