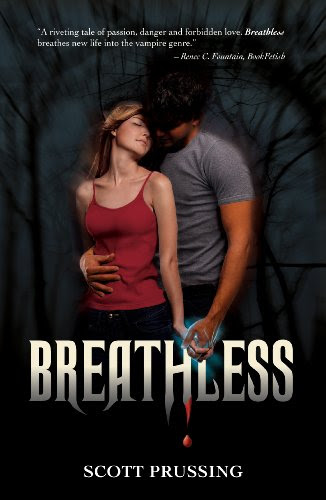 Blurb: Breathless is a modern fantasy/romance novel in the mode of Twilight and Vampire Diaries, with enough new ideas to excite even the most devoted fans...

Weston College freshman Leesa Nyland has been fascinated by vampires since she was three years old. That's when her mom started acting weird, insisting sunlight hurt her skin because she'd been bitten by a one-fanged vampire.

But fascinated doesn't mean Leesa believes. Any more than she believes in blue fire, people who live for centuries, and kisses that can kill. But when her beloved older brother disappears after warning Leesa not to come looking for him, she is forced to consider all these and more.

She also has to figure out what to do about her mysterious new boyfriend. She knows Rave likes her a lot-so why won't he kiss her? And why is he always talking about vampires?

As Leesa draws closer to finding her brother, she faces some gut-wrenching decisions. Should she risk her mom's life trying to "cure" her? Should she continue seeing Rave, after he reveals his dangerous secret? And most terrifying of all, should she make the ultimate sacrifice-give up her humanity-to save her brother?

Warning: This book is One Fanged TERRIFIC! To learn more about the Blue Fire Saga, go to www.scottprussing.com

My Cover Thoughts: I love this cover! The blue fire coming from Rave’s hands into Leesa’s body is BEAUTIFUL!

My Thoughts/Review: WOW is the first word that comes to mind. I laughed and cried and threw this book because I wanted more. Lord this book had me up all night reading like a mad person. Tehehe I really enjoyed it!

Leesa is your all American girl but with a twist. She has a crazy mother who has checked out a long time ago and a brother who is missing. She has graduated from high school and wants to attend the same college as her brother. She has had this planned since forever but she really formulates a plan when her brother goes missing and sends her a cryptic e-mail not to look for him.

Now Leesa is in Connecticut going to college and she is super excited to start classes but she is also excited to start searching for her brother. As she looks for clues she can sense someone watching her but she is not sure who it is or why they are watching her. She is shy so she has few friends and she keeps to herself when her best friend tells her they are going to a party. Once at the party she feels like she needs some fresh air so she goes outside and that is when she meets a guy dressed all in black with eyes that draw you in. she talks to him and as she is staring into his eyes and getting lost in the moment she feels someone watching only she isn’t the only person who feels it.

The boy she is talking to leaves her side and a few minutes later she meets another guy she cannot take her eyes off of. She feels something for this guy like she never has before but as they get to know one another she realizes he is hiding something and she wants to know the truth. She confides in this stranger and tells him about her missing brother and how her life mission is to bring him home before their mother realizes he is gone.

Only Leesa knows that the guy she likes and the other mysterious guy are keeping secrets and she wants to know what they are. What will Leesa do when she finds out the truth about the true nature of each of these guys. Will she love Rave or will she love Stefan? Where is her brother? Can she save him? Want to know the answers to these questions well you will just have to buy the book!

“It seems this is your lucky day, Volkanne,” Stefan said. “You’ll not die tonight.”

“I could say the same to you,” Rave replied, “were you not already dead.”

“Another time, another place, Volkanne,” Stefan promised, his eyes never leaving Rave’s as he backed away.

“I look forward to it, Vampire.”

Advice: This is a MUST read! You will fall in love with Leesa and Rave and Stefan.

Image and Blurb from: www.goodreads.com
Here's some rave reviews about Breathless:
“A truly captivating read.” VampireRomanceBooks.com
“I could hardly put it down.” ReadersFavorite.com
“A book you will fall in love with and want to read over and over again.” Bite This! Vampire Book Blog
“Breathes new life into the vampire genre.” BookFetish.org
“When I finished, I wanted more. I can’t wait for the sequel.” Paranormal Book Club
“Breathless was fantastic! A unique, creative, fresh approach to the vampire genre.” Literal Addiction Paranormal Book Club
“Breathless takes you on a spellbinding adventure. The characters are amazing.” SassyBookLovers.blogspot.com
“With a descriptive writing style, Scott Prussing delivers a refreshing spin on vampire reads.” Lovetiggi’s Book Reviews
So go on over to http://scottprussingpublishing.com/ for the deal of a lifetime!

Special Announcement: A limited number of 3 book holiday special deals are now available for advance ordering. Get all three books for just $24.99, (plus S&H). That’s 33% off the list price, plus you save on S&H when you order all three books together. Scroll to the bottom to order. Act now to get in on this great deal. Books will be shipped by December 1.

Special, Special Announcement: In honor of the imminent release of Helpless, I have reduced the price of a hardcover copy of book one, Breathless, to the incredibly low price of just $5.99! That’s less than the price of a paperback. This offer is good for only one week, until Sunday November 20, or until 50 have been sold at this price. Act now! (U.S. orders only for this special)
Posted by Tee at 11/14/2011 10:08:00 PM