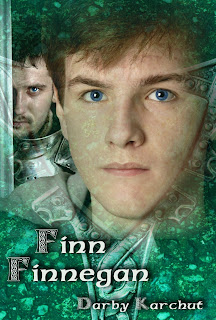 Finn (not bleedin' Finnegan) MacCullen is eager to begin his apprenticeship. He soon discovers the ups and downs of hunting monsters in a suburban neighborhood under the demanding tutelage of the Knight, Gideon Lir. Both master and apprentice are descendents of the Tuatha De Danaan, a magical race of warriors from Ireland. Scattered long ago to the four corners of the world, the De Danaan wage a two thousand year old clandestine battle with their ancient enemy, the Amandán, a breed of goblin-like creatures.
Now with the beasts concentrating their attacks on Finn, he and his master must race to locate the lost Spear of the Tuatha De Danaan, the only weapon that can destroy the Amandán, all the while hiding his true identity from his new friends, Rafe and Savannah, twins whose South African roots may hold a key to Finn's survival. Armed with a bronze dagger, some ancient Celtic magic, and a hair-trigger temper, Finn is about to show his enemies the true meaning of "fighting Irish."

Thank you so much for having Finn here today. I hope your son enjoys it!

Darby,
Thanks a bunch! I can not wait for him to read it!