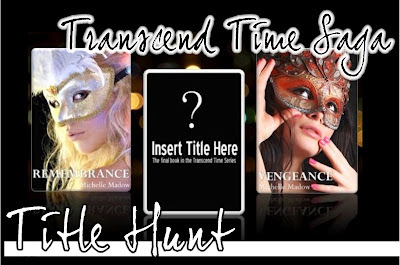 Once you've unscrambled the title, go to Michelle Madow's blog and use the title name to enter the giveaway for a voucher for an advanced e-copy of the final Transcend Time novel! (She is giving away a voucher because the novel is planned to be released at the end of the year, and she hasn't finished writing it yet! This voucher will ensure that you will receive an advance e-copy once they are available).

Lizzie Davenport has been reincarnated from Regency Era, England ... but she doesn't know it yet.

Then Drew Carmichael transfers into Lizzie's high school at the beginning of the year, and she feels a connection to him, almost like she knows him. She can't stop thinking about him, but whenever she tries talking with him about the mysteries behind her feelings, he makes it clear that he wants nothing to do with her. Reaching him is even more difficult because she has a boyfriend, Jeremy, who has started to become full of himself after being elected co-captain of the varsity soccer team, and her flirtatious best friend Chelsea starts dating Drew soon after his arrival. So why can't she get him out of her mind?

Even though Lizzie knows she should let go of her fascination with Drew, fighting fate isn't going to be easy.

How far would you go to get revenge?

When Chelsea Givens discovered that her ex-boyfriend Drew dumped her to be with her former best friend Lizzie, she'd never felt so betrayed in her life. Then her new friend Shannon tells her she can help set things right. Chelsea's willing to listen, but what Shannon wants her to believe -- that she shared a past life with Drew -- is impossible. And what she wants her to do to get him back … well, it's downright crazy.

Could Shannon be telling the truth? And if she is, what lengths will Chelsea go if it means making Lizzie pay?

Find out in Vengeance, the second part of the Transcend Time Saga.

*Vengeance is the short story that bridges the events in Remembrance and the final novel in the Saga.

In the final book I am really looking forward to seeing what happens between Drew and Chelsea and Drew and Lizzie. What is in store for them only time can tell but what will happen to them once all the lies and secrets come face to face with reality. I am so EXCITED to find out what happens to everyone once the dust settles. Leave me a comment and tell me what you want to see happen. I am dying to hear some theories......
Posted by Tee at 2/23/2012 11:32:00 PM