Mark of the Seer By Jenna Kay Interview and Book Review 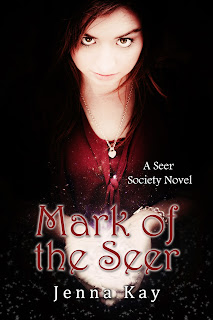 CLARITY MILLER always thought of her life as semi-normal. She had friends that would do anything for her, boyfriend that was madly in love with her, and a roof over her head that she shared with her aunt.

Everything seemed to be falling into place. That is, until the day she met Sam.

When Sam informs her that he’s her guardian angel and that she has been given the gifts of a Seer, her life starts spiraling out of control. She wants nothing to do with the spiritual realm.

All she wants is to have a normal life as a teenager, but when a tragedy occurs that causes the whole town of Garlandton to fall to its knees she realizes that she has a very important decision to make.

Should she embrace the life of a Seer?

Today I would like to welcome Jenna Kay to A Diary Of A Book Addict. She is the author of Mark of the Seer. This is the first book to be released in her Seer Novel Society series. Jenna, thank you so much for stopping by and sharing your novel with us. I have to say I am a HUGE FAN of yours *Blushes* since I read Clarity in 2011, which is now called Mark of the Seer.

Can you share with us a little of the background for this series? How did you come up with the idea of writing this story?
Yes. The Seer Society Series is a speculative take on the “what ifs” in the supernatural realm. “What if” there were Biblical Seers that could see angels and demons in the spiritual realm? “What if” they could send a demon back to hell by just laying a hand on them. “What if” they could fight along side their guardian angels against the forces of evil. When I started this series my ultimate goal was to get people to open their minds and think.

What made you decide to write about Angels and Demons? This is such a HOT topic today with a lot of writers writing about the Demon parts. Instead you chose to write about the Angel side and how Clarity must chose between good and evil.

Angels, demons, and the spiritual world has always fascinated me. I've read many angel/demon books where the supernatural “falls” for their human. I wanted to make the Seer Society like nothing else out there. Where the series is not preachy or labeled Christian fiction, it does speak about God and His love for us. The guardian angels in this series love the humans they watch over unconditionally, no matter what. I just put a different otherworldly twist in the mix with my angels and demons.
Can you give us a little background on Sam and how he feels about being Clarity’s Angel? I must say Sam is a very patient Angel with Clarity *Winks*

Sam is a very compassionate and loyal angel, and when it comes to Clarity he takes his loyalty even farther. The angels in this series are loyal to God and His greatest creations, humans. Yes, Clarity is a handful, and yes Sam is very patient with her. That's his job—no matter what Clarity says, does, or decides, he's got to continue to watch out for her.

Yes, I thought it would be a cool twist in the story to have all the angels have their own unique smells. Sam smells like Lavender, Sarah like Honeysuckle, Mary Beth like citrus, and when you have a roomful of angels get ready for an overwhelming perfume department smell. Not only do they have their own unique scents but they also emanate a soothing calmness.

So with the angels smelling sweet and fresh, the demons smell the exact opposite. I like to use the expression “road kill mixed with sewage” when I talk about how demons smell. I have many different expressions and concoctions when it comes to describing a demons smell...it's quite fun!

What was going through Clarity’s mind when she first found out she was a seer? Did she doubt Sam?

First of all Clarity knows something's up the first time she sees Sam standing in the door of her classroom. Deep down she knew that Sam was not of this world, but trying to live in a normal reality Clarity tries to shrug it off, even after she awakes from a dream to find marks on the palms of her hands. So when she finds out she's a Seer and that Sam is her guardian angel her whole world and the way she sees it changes. Yes, she has many doubts, but in the end all the doubts are erased as the spiritual world is practically thrown in her face.

Sam is quiet about a lot of things can you tell us why he can share some things and others he cannot? I do have to say I love a quiet and secretive man but boy oh boy does he take the market on that *Winks and Chuckles*

Hehehe! Well, the thing with Sam is...he would love to be able to tell Clarity everything, but that would take away from her journey and path. We humans have the freewill to choose the path, choose the journey, and make the decision for our lives. Even though it would be nice to have someone give us the heads-up on the road ahead, like is it a path to success? Or a path to utter destruction? She has to go through this and make the decisions, though she is not and never alone.
Can you tell us 7 random things about Sam and Clarity?
Haha, Ok, here goes!
SAM: Tall, dark, handsome, mysterious, loyal, protective, and simply enthralling.
CLARITY: Sassy, smart, beautiful, inquisitive, trusting, eager, and fun.

Know this is going to be rapid fire for you. Just a quick glimpse into the mind of a BRILLIANT author!
1. Soda or Juice? Soda
2. Milk Chocolate or Dark Chocolate? Milk Chocolate
3. Fruit or Veggies? Fruit
4. Favorite Music? Rock/Metal
5. Do you have a favorite Church Scene? Um...Jesus
6. Do you have a special place to go when you write? I can write anywhere
7. How many books are going to be in the series and when can we expect the second book to be released? There will be five in the series and the second book is coming around Christmas (Fingers Crossed!).

Jenna thanks for stopping by and sharing all the love with us. I do hope you will stop by again when your second book is released and congrats on getting it published by Crushing Heart and Black Butterfly.

Thanks for having me and supporting me through this awesome journey. Love and blessings to all!!
Jenna
Here's where you can stalk me!

Email ThisBlogThis!Share to TwitterShare to FacebookShare to Pinterest
Labels: Mark of the Seer By Jenna Kay Interview and Book Review