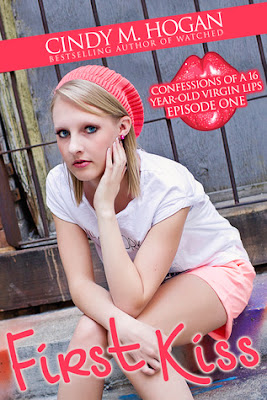 VL. Virgin Lips. You may not have heard of it, but where I live, it’s a thing with a card, even if it is a figurative card. I was Brooklyn Hill, certified virgin lips, and I planned on clinging to that figurative card with all I had—while dating as many of the hottest guys at school as I could.

Maybe that’s a bit strange. I mean, what teenage girl isn’t interested in kissing? Locking lips definitely interested me, but the drama that came with it didn’t. No kissing, no drama. Simple.

But on my sixteenth birthday, on my first real date even, the drama found me. His name was Luke Graham—cute, funny, and bad news for the whole female race.

We all laughed and ran outside and stormed the hot tub.

After the obligatory splashing and dunking settled down, Parker jutted his chin at me and teased. “You’re sixteen now, Brooklyn, the question is, are you still in the VL club?”

A strange silence fell over the group. I guess they really wanted to hear my response. I paused just long enough to give the answer away. I looked up, noticing a few stars speckled the skyline.

“Oooh,” Mike said. “’nough said. Well, my dear, your pain will now be over.” He moved toward me, lips puckered, eye brows waggling. I turned my head before he could make contact. My whole body was on fire.

Ali and Katherine, my two red-headed friends, pushed him back. “Down boy. Unlike you, she wants her first kiss to be special, meaningful, and with someone she wants to kiss. So, back off.” Ali could be forceful when she wanted to be. I loved and hated that about her.

He whimpered like a wounded dog as he sat back in his spot.

“Yes siree, the two of us will die old and decrepit, kiss-less…unless, of course,” he said with a flourish, “we find that special someone.”

“Then you’ll be missing out on the best stuff in life,” Ty said. Ty was on the swim team with Parker and me and was known for his roving lips.

“Just ‘cause you’re a lip-slut, Ty,” Ali said, “doesn’t mean you can diss on those saving themselves for something special.”

“Ohhh!” Harrison said, “Ali’s on the war path tonight. You guys better be careful what you say!”

“From the mouth of the oldest VL in the group,” Ty shot back at Ali and splashed her with water.

I could tell she was blushing wildly even in the semi-darkness.

“No way!” Parker called out. “Ali, you disappoint me.” He frowned in an exaggerated way.

Ali splashed me. “Thanks a lot, birthday girl.”

That started everyone telling about their first kisses.

Mike said, “I went away with sore teeth after my first kiss. Instead of leading with our lips, our teeth clacked hard against each others’. But don’t worry, Brooklyn, I’ve got all that worked out, now.”

Before I could be too embarrassed, Katherine spoke up. “Nobody’s first kiss was worse than mine. He was salivating so much it dripped down my chin.”

“I’m serious. We were just sitting there, not talking, and all of a sudden—a shooting star streaked across the sky.” He shushed all the mocking and sounds of disbelief. “It totally happened! And then, it was like we were telepathically connected, we looked at each other and without even thinking about it, I kissed her, soft and slow. When we stopped, she asked me my wish was, and I said—‘I just got it.’”

All the girls in the group sighed wistfully. I was impressed. I had no idea Ty was such a romantic. Then he broke the spell. “And, man, her lips were so hot. I’ll never forget those lips.”

The girls all groaned and splashed him. “Typical!” Alyssa said, rolling her eyes.

A few more kids shared their first kiss stories. Most sounded awful. We were either laughing hysterically or completely grossed out during the conversation. I held hope that my first kiss would be dreamy, like Ty said his was.

I love a good scare, and I'm not talking about a gory, bloody scare, I'm talking about suspense.There's nothing better than reading a book or watching a movie that makes your heart race. Add in a little romance and I'm hooked. I only like true romance-no smut.

We are here celebrating your newest releases: First Kiss and Stolen Kiss. How have you liked writing a serial and how's it different from a series?

It's been harder than I anticipated, but I love a challenge. The best way to get a grasp on serials is to think about a season of your favorite TV series. Each season has 6-11 episodes that make up the season. Each episode stands on its own, but is also connected to the entire season.

The third episode is called Rebound Kiss and will be out in the next week or two.

How long have you been writing books?

I started my first book, Watched, that you can pick up for free during this book blitz at your favorite eBook retailer, about six years ago.

Once that became a bestseller, I didn't have time to be a great teacher and a great writer, so I quit teaching. Which, was really hard. I loved being a high school teacher, mostly because I got to hang out with awesome teens all day.

What do you love to write about?

Is there anything more fascinating than teenagers? Seriously, the unpredictable nature of teens makes for great stories. I love the idea of putting sixteen to eighteen year olds get into extraordinary circumstances and seeing what they do.

What's the hardest thing about writing?

You're probably going to laugh, but I think the hardest thing is  getting names for my characters.

How do you plan out your books?

When I come up with a new story idea, I usually know the beginning and the end- that's it. I don't outline my stories, I just write what comes to me during a short brainstorming session each day.

How do you make your scenes so real?

I always go and visit the places that my books are set. Last year I went to Belgium and took copious notes and a million pictures before writing Created. I also visited Washington, DC, Helena, Montana, and Niceville, Florida before writing Watched and Protected. This year I traveled to New York and France for the two books I'm working on right now.

I lived in Roseburg, Oregon where Adrenaline Rush is set and I also lived in Tennessee where Gravediggers is set. We traveled to both places last year to make sure the setting was correct for both books.

You may think I love to travel, but really, it's Bill, my husband who has a love affair with travel.

I mostly read YA books, but I also love adult mystery and suspense novels.

Do you have children?

I have two teenage girls. They are so fun to be with. They inspire me. My oldest daughter inspired the serial, Confessions of a 16-Year-Old Virgin Lips

My husband also inspires me by coming up with some of the best ideas. The idea for Gravediggers came from him.

I'm waiting for my out-of-control dog to inspire me instead of make me crazy.

The covers of those two novels will be revealed soon.