Haunted by an animal attack, seventeen year old Charlotte feels she is being followed. When she runs into a mysterious boy while camping, she’s afraid. Nothing seems right about him. Despite trying to stay away, there is an unmistakable draw to be near him. Even his scent smells familiar. But the closer she gets, the faster the secrets begin to unravel. Not only is he not human, he may have a link to her past. When Charlotte finds out someone wants her dead, she is torn between love and fear. Can she trust him to keep her safe?

Today we have the Pack here visiting us. I am so happy the decided to stop by and answer a few questions. I have to say this some questions may contain spoilers in them. I am sorry for that in advance but once you read their story you will see why we asked what we did. So remember if you did not read the book some of the questions and answers will have spoilers in it.

Let's welcome The Caged Moon Pack to A diary Of A Book Addict. Thank you guys for stopping by to chat with us. Charlotte and Ty I am sorry to say that there are A LOT of girls ready to bang the door down to get to your men. *WINKS* hehehe you guys have such an interesting story so I hope you don't mind me asking a few PERSONAL questions. I promise not to personal but inquiring girls want to know about you two *SWOON WORTHY* guys. 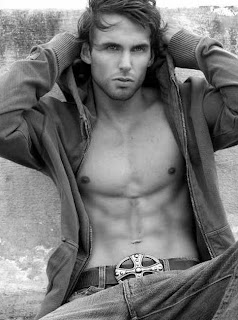 Liam or would you like to be called Aiden *WINKS*.....

What went through your mind when you first saw Charlotte at the camp ground?
Umm, okay. I’ll be honest with you. I smelled her from the car, on the way into the park. I thought she was another wolf, so had to, you know…check her out. *smirks* ‘Course once I saw her, I couldn’t help smiling. She was adorable.

Was it hard for you to stay away from her?
Yea…you could say she kind of drove me nuts. She had this adorable way of acting all tough and embarrassed, it was too tempting NOT to have a little fun with that. Besides, there was just something about her, and her scent that was insane.

Why did you get so mad at her when she looked at the book in your study?
You had to ask that, huh? *shakes head* Okay, it was one thing her knowing what I was, but that information was private. No one knew about what my brother and I did. It was a very difficult thing for me to do what I did. I knew no one would understand, and I didn’t want to go there. I needed Aaron gone on many levels.

Where you ever going to introduce her to your brother?
In my mind, Aaron was dead. I wanted it to stay that way. It was easier.

What was it like growing up with Thomas?
Lonely. He pushed me a lot, had a lot of expectations, but was never happy with anything, especially with Aaron. Mostly we kept to ourselves. I don’t want to talk about it.

Aaron *Lord I am about to pass out from that blue eyed gaze*.....

Why did you stay away from Liam for so long?
‘Cause he thinks he’s God’s gift to werewolves and that he knows all. He believes everyone should just bow down to his wishes. I also wasn’t strong enough at first…WHICH has changed. But at the time, he and his egotistic ways kicked me from the Pack. Why would I want to go back? He’s my brother, yet he kicked me. He could go to hell for all I cared.

Did you know what Thomas did to Charlotte?
No. I realized there was something different about her when I met her at Liam’s house. I put two and two together, but I had no idea that the bastard was involved. That one threw me.

How did you know Ty was your mate? Did you sense it in her the first time you met?
I didn’t. I just thought she was cute. *shrugs* So…of course, I nicely decided to help her sort some things out in that album. She surprised me. She actually cared.

How do you feel about Charlotte?
Charlotte…yea, um…*shifts eyes* She’s cool…I guess. Okay, I still have some issues with her, but that’s for another time. *grins tightly*

Will you and Liam form a pack?
Sure. I’d love to have a new Beta. *grins*

What were your first thoughts of Liam when you saw him at the camp site?
Oh, God. That first meet was so embarrassing. He kept giving me these ‘looks’ which okay, definitely had hot written all over them, but something wasn’t right about him. He kept avoiding my questions and his eyes gave me the creeps. He also seemed to think everything was amusing, which was infuriating.

When did you realize something was different about you?
Honestly, since I was six, but I didn’t realize the extent of that ‘difference’ until I kissed Liam for the first time. I felt something buried inside. I knew it. I just didn’t want to admit it.

What did you feel on your first date with Liam when you guys were kissing?
How to explain that! I couldn’t even breathe.

How do you feel about Ty and Aaron?
I still can’t believe that they are together. I don’t like him and don’t trust him. I think he’s got her brainwashed.

Did you think Charlotte was crazy when she told you about Liam?
I love the girl, but I did think she was a little paranoid at first. I mean, come on, werewolves? But she did have some good solid facts that were rather strange, and if she believed something was wrong, of course I’d stand by her to figure it out.

Why did you wear a Wolfs bane necklace?
It was my mothers. My father gave it her as a gift before he died. She never felt comfortable wearing it so she gave it to me. It means a lot to me. I used to always hold it when I felt I needed that presence of my father with me. I didn’t realize it was wolfs bane until later.

How did you know you were Aaron's mate?
I didn’t. I knew he was one of them, which freaked me out, but I don’t know what it was about him. He started telling his story and part of me just broke. He had no one, and there he was sitting on my bed with those baby blues, so sincere, and lost. I had to help him.

Where do you see yourself with Aaron in a few years?
I don’t know. All I know, is I love him. I just hope everyone can come to understand that, and accept that. I can understand Charlotte’s hostility, but it hurts.

I loved everyone in the pack but I just have a few questions for Steve seeing his is the only pup in the pack.

How do you feel about Liam and Charlotte?
I think they’re awesome. Charlotte’s great and anything to help keep Liam on his toes, is definitely well worth the show. *chuckles* I’m going to get killed for that one.

Will you stay with the pack until you mate?
Eh. I’ll stay will Liam until I die. The Pack is my family. They’re a part of me. To leave them, would be like leaving myself.

How do you feel about being the pup in the pack?
You mean how do I feel about being dragged around, made to carry everything, and never taken seriously? Oh, it’s great! :P But like I’ve said before, I maybe the youngest, but at least I’m not the ugliest. *grins*

Do you trust Aaron?
*looks around to make sure no one’s listening* Not in the slightest. I get the brother thing and all, but I think this is a bad idea.

How do you really feel about Charlotte? Do you have feelings for her?
I like Charlotte a lot. I’m serious when I say she’s awesome. But nah. She’s like a sister to me.

Thanks guys for stopping by and answering all the crazy questions we had for you. I hope and pray *WINKS* that we get to see more of you and hear more stories about what's been happening to you guys.

Is there more coming soon?
There very well may be in the near future. The story doesn’t end here. *winks* Thank you for having us!!

Read Between the Lines said...

awesome interview and I loved the book also I sure do hope there will be more.

I loved the interview and cast! I haven't heard of this before and werewolf books are my favorite! I will definitely be reading this soon. :D Thanks for bringing it to my attention.

Hi, Everyone. Thanks for the wonderful review and chance for my 'guys' to be interviewed. It was a lot of fun! ;)

Thank you for all the comments, everyone and hope you enjoy Caged Moon as much as I did writing it. :)

Thanks guys I had fun reading Caged Moon and I really enjoyed doing the interviews. Have fun reading this book and enjoy these swoon worthy men ;)

I definitely need more. Especially of Liam lol. I absolutely LOVED Caged Moon finished it last night. I mean wow what an amazing story I hope there is another book in the making. Crosses fingers lol.