Shayna and her two best friends have the abilities to manipulate and control the four elements, earth, air, water and fire. While learning to hone their growing powers, they discover a new and malicious presence in their sleepy beach town. Someone is performing blood magic and threatens to expose their small magical community. So far only small animals have been slaughtered, but then the nightmares start.

Shayna suffers nightmares of being chased and sacrificed only to wake up bloodied and bruised. She thinks her magical blood is the ultimate target for the final blood rite. When an innocent girl, Tracy, is kidnapped Shayna knows it's only a ploy to draw her out; she can't let someone die because of her.

MY REVIEW
5 of 5 Earth Elements The Elemental Series by Shauna Granger is one of THE BEST series I have read this year. I have read a lot of series and this one blew me away. It took me by surprise and when I heard there was going to be a tour I jumped on board. I have to say that this is one of those series that stays with you long after you finish reading. A Huge Thank you to AToMR Tours for allowing me to be a part of this tour.

In Earth we meet Shayna, Steven, and Jodi. They can manipulate and control the four elements earth, air, water, and fire. They are learning how to harness their gifts when things start to get a little weird in their sleepy town.Shayna is having nightmares and when she wakes she feels tired and bruised like she was actually there in the dream fighting for her life and fighting to save her town from the evil that is lurking.

Then to make matters worse for Shayna a new boy Jensen comes to town and he is showing interest in her. She likes him but keeps him at bay because she is really not ready for a relationship. The feelings she feels towards him are new to her and she is worried because she really doesn't now a thing about him. She will have to put her guards down in order to find out who he is and what he is about.

Thank God she has Jodi who is the bossy one of the three and Steven who is the nurturer of the three. They have a friendship that will stand the test of time and tribulation. So when Shayna finally tells them about the dreams and all the weird things that have been happening in town start to add up to someone using Blood Magic the gang get together to find out who it is and why they are doing it. When they find out who it is it is a shock for them because they would have never suspected this person of such evil.

It was a rough start to the school year for Shayna and her friends, Jodi and Steven, but thankfully summer break is near. Trying to sort out her feelings for the new guy in town, Shayna agrees to let Jensen join her on a group date with her friends. While out they end up at a local coffee house where their classmate, social outcast Jeremy McCormick, is humiliated by his baseball star brother. When Jeremy runs away from the jeering crowd, Shayna and Jodi hear the unmistakable sound of a thousand wings chasing after him, but no one else seems to hear them. These are not like any air elementals that Shayna or Jodi have ever encountered before and they fear Jeremy has gotten himself tangled up in something too dangerous for him to handle. But when Shayna tries to help Jeremy control his magical abilities she realizes it might be the biggest mistake of her life.

MY REVIEW
5 OF 5 Air Elements

Air is the second story to the Elemental Series by Shauna Granger. If you have not read Earth you don't know what your missing! This series has a little of everything in it. In Air it picks right up where Earth left off. The trio is enjoying then ending of the school year. Summer is coming and they are itching to get out of school and have some fun. Shayna is still confused about her feelings for Jensen but she knows she likes him and wants him around. Jodi is still bossy as ever and Steven is still patient and supportive to his best friends.

In Air we get to meet Jeremy. Jeremy lives in the shadow of his brother and he hates it. He hates his father and his brother so much so that when he is approached by someone who says they can help him he accepts. The only thing Jeremy did not realize was that the help he was going to get came with a price. Jeremy did not care and he allowed his anger and hatred get the best of him. This is where the trio come in because they are all on a group date they spot Jeremy and his older brother. His older brother makes fun of him and says and does some mean things and when Jeremy gets so upset he unleashes evil.

Jeremy is not sure what is going on and Shayna tries to help him but he just does not want the help. He hates his family and wants to see them pay for their actions. Jodi tries to help Jeremy and in this book Jodi is coming into her powers and learning to use them and accept them for what they are. But will it be to late for Jodi and the gang to save Jeremy? Will they be able to figure what kind of evil is lurking out there trying to destroy their little town? Will Jodi and gang do what is right or will they leave Jeremy to fend for himself?

This is an awesome follow up book to the series and if you have not read it yet then you need toi run out and get it because it is a MUST READ!!!!!!

Book Three in The Elemental Series

Shayna's first surfing session of the summer is interrupted by the screams of a mother who has lost her little boy in the water. Without regard to her own safety, Shayna swims out, rescues the boy, but must escape the clutches of something far worse than she could have ever imagined – mermaids.

Compelled to answer the sirens' call, the boys of Shayna's town are drawn to the sea, but when they return are afflicted by an unknown illness, a sickness which is draining them of their life force. Unable to tell anyone about the mermaids, Shayna and her friends are forced to solve the mystery before it's too late, and in doing so, Shayna will finally have to face the full force of her powers. Whether she’s ready or not, she will have to face her true nature.

MY REVIEW
5 OF 5 Water Elements 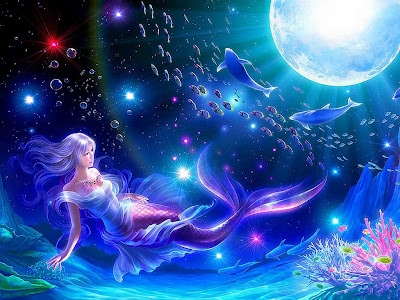 Water is the third book in The Elemental Series. Oh man as this series progresses the stories get better and better. I just could not out this book down and at the end I said I needed more!

In Water school is out and the summer is just beginning and the gang is ready to enjoy their summer drama free but evil has another plan for them. While Shayna is getting her surfing lessons on she hears the screams and cries of a mother who is losing her son to the water Shayna jumps right into action and saves the boy. But while she is saving the boy she comes head to head with a mermaid. Shayna is not sure what to do and so she tells Jodi and Steven and they together must find a way to defeat these evil mermaids.

As the Siren's call to the boys of the town to the water they are returning home with and illness that is draining all of their life source out of them. Shayna realizes that they are going to have to step up the game if they want to save the boys of the town. As the mermaids get more brazen in their actions Shayna is finally coming to turns with her true nature and her true powers and she will have to pull out everything she has to defeat these monsters and save the boys.

Will Shayna embrace her true self to save the boys? Or will she turn the other direction and ignore what she knows is her real self? What will happen to all the boys of the town? Will the mermaids win? You will just have to read this book to find out!

FOLLOW THE TOUR TO SEE THE AWESOME REVIEWS AND INTERVIEWS AND GUEST POSTS ON THIS SERIES: http://wp.me/p20ttU-aL

Thanks for the giveaway! These look interesting, and i will definitely check them out!

I love your recommendation and I love it when all the books or the majority of the books are already out! Thanks!

Thanks guys! I love this series :)

Looks good! Thanks for the recommendation. I've read some books before on elemental powers which is always a fascinating subject.

Thanks for the giveaway, this looks like a really good series to get into.