HAPPY VALENTINE'S DAY! TODAY I HAVE A GREAT BOOK TO READ FOR ALL LOVER'S OUT THERE. I HOPE YOU ENJOY THE REVIEW AND DON'T FORGET TO GO OUT AND BUY DRACIAN LEGACY 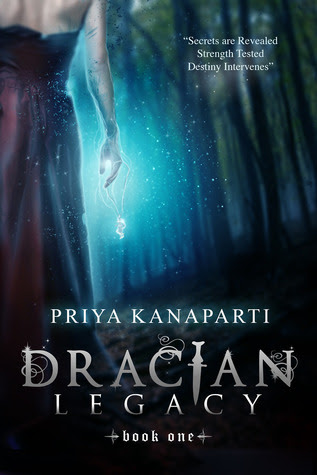 Ren and Axel are caught between two powerful magical races: one destined to end the bloodshed, the other out for vengeance.

Seventeen-year-old Ren Pernell is prophesied to end the war between the Dracians and the Telalians. So when a Dracian, Axel Knight, is sent to find and bring back the prophesied one before she turns eighteen and Telalians discover of her existence, unexpected sparks start to fly between the two. Once Ren finds the truth behind Axel’s arrival, she wants everything to do with him and nothing to do with his mission.

Things prove to become difficult as Ren’s life is constantly threatened by the Goarders, humans who sold their souls, a Proxy Succubi, and the leader of the Telalians, who has been searching for her as well.

With the clock ticking and Ren’s life in jeopardy, it is no longer just a mission for Axel. It becomes a personal endeavor to save the only one he’s ever loved. In a heart racing ending, they must find a way to evade the preordained war that won’t also end Ren’s life.

My Review
5 of 5 Dracian Legacy
HOLY MOTHER LOVER!!!!!!!!! I love love love cliffhangers because they make me go back and re-read the book so I can try and see if I can figure out what is going to happen. I have to thank Kay my bestest book friend for hipping me to this book. Lord when I started reading it I could not put it down. I even ordered take out for the kids because I did not want to cook. Right from page one I was hooked and so caught up with Ren and Axel that I felt like I was in the book and I did not want it to end.

There is action, suspense, and romance in this story that will knock you on your butt. Ren is just your ordinary girl living her life and minding her own business or so it first appears. We soon find out that Ren is prophesied to end the war between the Dracians and The Telalians. She does not know that though and when Axel comes to save her he explains everything to her. It is not simple because Ren does not believe him at first but Axel soon proves what he is saying is true. Then the unexpected happens and the Ren and Axel start to fall for each other. The more danger comes to Ren the harder Axel fights for her to keep her safe.

Axel has never opened his heart up to anyone but there is something about Ren that tugs at his heart and he has to have her. He has some competition which I love because Ren's best friend Dean secretly loves her and he wants to be with her. But Axel is having none of that and he is the one that will do anything to protect her. Things start to get rough for Ren when she is hunted down by humans who want to destroy her and Goarders who want her dead and the leader of the Telalians seeks her out to destroy her. He wants to make sure that prophecy stays dormant and never comes to fruition.

What will happen to Ren and Axel? Will Ren be captured? Will Axel leave Ren to fend for herself?

This is a must read! Go out and get it today!

Indie YA/NA Author. DRACIAN LEGACY, a YA Paranormal Romance releases in 2013. I strongly believe that true love concurs all and that's what I write about

I live in beautiful city of Boise, ID. I'm a full time working mom and part time YA Novel Author.

I love to connect with people and would love to hear from you!

Thank you SOOO much for having me and Dracian Legacy on your BLOG and for such wonderful kind review!