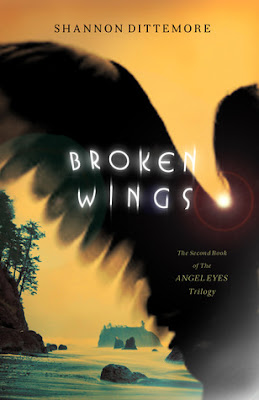 Summary from Goodreads:
Giant angels with metal wings and visible song. A blind demon restored from the pit of darkness. And a girl who has never felt more broken.

Brielle sees the world as it really is: a place where the Celestial exists side by side with human reality. But in the aftermath of a supernatural showdown, her life begins to crumble. Her boyfriend, Jake, is keeping something from her—something important. Her overprotective father has started drinking again. He’s dating a much younger woman who makes Brielle’s skin crawl, and he’s downright hostile toward Jake. Haunting nightmares keep Brielle from sleeping, and flashes of Celestial vision keep her off kilter.

What she doesn’t know is that she’s been targeted. The Prince of Darkness himself has heard of the boy with healing in his hands and of the girl who sees through the Terrestrial Veil. When he plucks the blind demon, Damien, from the fiery chasm and sends him back to Earth with new eyes, the stage is set for a cataclysmic battle of good versus evil.

Then Brielle unearths the truth about her mother’s death and she must question everything she ever thought was true.

Brielle has no choice. She knows evil forces are converging and will soon rain their terror down upon the town of Stratus. She must master the weapons she’s been given. She must fight.

But can she fly with broken wings?

Brielle's life is falling apart after she has her big showdown with the supernatural. She is tired and just wants everything to go back to normal or so semblance of normal but by the looks of things they will not. Brielle finally gets to see the world the way it really is which is humans and celestial beings live side by side and the humans have not discovered the celestial beings. Plus to make matters harder Brielle knows Jake is keeping something from her because he is acting strangely and she is not sure why he is acting this way. It is bad enough her father is drinking heavily again and he has a new younger girlfriend who creeps Brielle out and he HATES Jake. What is a girl to do? To add the cherries on top Brielle finds out the truth behind her mother's death. What she finds out rocks her world to the core!

Brielle is trying so hard to get some normalcy in her life but she knows their are things that people are keeping from her and she is keeping things from her loved ones as well. Jake for one has a secret that he will not tell her and she knows he hiding something because she can feel it in heart. She wants him to come clean so when he is ready she will be there waiting with open arms. She is also keeping the fact that she is having nightmares from people. She is having these horrible visions and she is wondering if they are going to come to fruition. Brielle is being targeted but she does not realize it until it is to late.

The Prince of Darkness wants her. He has heard about the boy who has healing hands and a girl who can see through the Terrestrial Veil. He wants both of them for his master plan and he will stop at nothing to get what he wants. So he finds Damien and send him back to Earth to complete his plan and find the girl. The cards have all been placed and now it is showdown time. Good VS Evil who will win? Who will come out on top? Will Brielle be able to survive this war? Will Jake be able to survive this war?

Can Brielle fly with Broken Wings....... 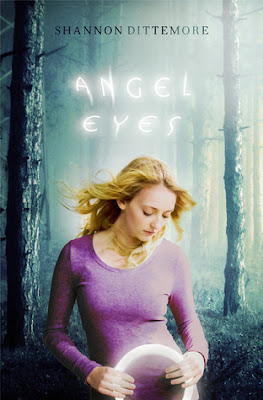 Summary from Goodreads:
Once you’ve seen, you can’t unsee. Everything changes when you’ve looked at the world through . . .

Brielle’s a ballerina who went to the city to chase her dreams and found tragedy instead. She’s come home to shabby little Stratus, Oregon, to live with her grief and her guilt . . . and the incredible, numbing cold she can’t seem to shake.

Jake’s the new guy at school. The boy next door with burning hands and an unbelievable gift that targets him for corruption.

Something more than fate has brought them together. An evil bigger than both of them lurks in the shadows nearby, hiding in plain sight. Two angels stand guard, unsure what’s going to happen. And a beauty brighter than Jake or Brielle has ever seen is calling them to join the battle in a realm where all human choices start.

Thank you to YA Bound for allowing me to be a part of this tour. I have read a lot of books about Angels and Demons but Shannon has created a world where you feel like you are right there with the characters.

Brielle is a unique character in this story. She returns home after her friend is murdered. She blames herself and feels like she could have done something to stop it from happening but little does she know things or people are lurking in the background. When she is confronted with the things that go bump in the night she is not sure how to handle things. Her life feels like it is closing in on her until she meets Jake.

Jake is a great character in this story. Jake can heal with his hands and as he and Brielle get close things start to kick off. A secret world is revealed and Brielle will have to trust Jake or walk away. What will Brielle do in the end? Will she follow her heart or will she allow the devil to sway her to his side.

This story is a breath of fresh air and it allows the reader to see both good and evil and see what the consequences are for choosing evil. Brielle will have to face some hard core facts about God and Lucifer and when she meets Lucifers child she will have to decide if she will listen to him and be swayed to his side or will she chose Jake and the Angels. Come along for an adventure that is sure to tug at your heart. Love angels this book is for you. Love demons this book is for you. Which Team will you be on....... Team Jake or Team Damien? 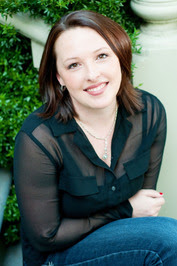 About the Author
Shannon Dittemore has an overactive imagination and a passion for truth. Her lifelong journey to combine the two is responsible for a stint at Portland Bible College, performances with local theater companies, and a focus on youth and young adult ministry. The daughter of one preacher and the wife of another, she spends her days imagining things unseen and chasing her two children around their home in Northern California. Angel Eyes is her first novel.