"Falling in love will pull you under..."

Bill Kyser has a plan to take the sandy farms of his hometown and turn them into a world-class tourist destination--and become a billionaire in the process.
Alexandra "Lexy" LaSalle has a plan to change her life by becoming a world-famous artist.
Meg Weaver has a plan to hold onto Bill no matter what she has to do.

Three friends, three dreams.
One fatal decision will change all their lives forever.

In Dragonfly, Bill Kyser gave Anna the three journals that held the story behind the powerful developer's seclusion and the damaged lives of his family members.

Anna hoped to find a way for Julian to know the truth, but as she digs deeper into the tragic events of the past, she realizes silence could be the only option.

Now she's in an alliance with the man she formerly feared. And if Julian finds out what she knows, she could lose for good the boy she's starting to love. 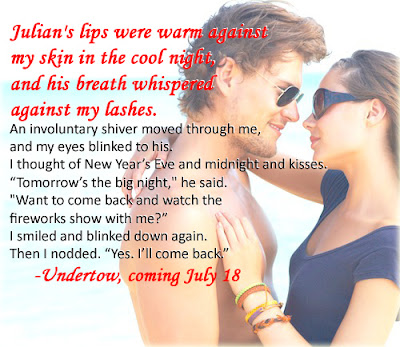 I just finished Undertow and my God I am so emotional! I just can't even think straight right now. I love this series so much and October can't come fast enough to see what happens to everyone. This review is going to be a little different because I feel like I have to say something about each character that played a huge role in this book. As we all know well those of you who have read Dragonfly know that the ending was an incredible ending leaving us with Anna having three journals in her possession given to her by Bill Kyser himself. We get to see a glimpse into Bill, Meg, and Lexy's life. I have to say that this book had me in tears because it had so many emotional things in it and the fearsome three as I like to call Meg, Lexy, and Bill go through some stuff that broke them and now Bill Kyser is ready to let go of the pain and move on to want he has wanted for sometime.

When we first meet Bill Kyser he is drunk and rude and callous to Anna. He scares the crap out of her and Jack is upset that he is acting out when he has company. No one knows the pain that Bill carries and the guilt that he carries with him in regards to raising his children. He loves them all and wants to protect them. Bill has carried his secret long enough and when you find out what it is you are going to be amazed. I actually fell in love with Bill Kyser in this book because what he went through and what he sacrificed to give his family the life they wanted.

Meg... Meg... Meg.... I am so disappointed with you and disgusted by your selfish acts! I HATE HATE HATE HATE women who hold a man by doing what you did. Nothing good comes from lies and secrets and in the end Meg I guess you found that out didn't you. Was it a mistake what happened or did you do that on purpose? Your behavior from the minute you saw Bill Kyser has been nothing but selfishness. Plain and simple you are a selfish B^%$#! I can't believe how you treated your friend and how you treated your husband. Just spoiled rotten and look what that got you in the end. The one fear you had you pushed your husband into because of your insecurities and lies and selfishness!

Lexy AKA Alex.... My heart broke for her. Julian's mother is a special lady that I respect and loved! She was what a real friend should be and yes she made a mistake but she regretted it and she paid for that mistake everyday and she will for the rest of her life. She loved Meg and would do anything for Meg but when Lexy needed Meg she was not there for her. It amazed me how selfless Lexy was and how she wanted to what was right and she punished herself as well as her family to see to it that she kept the peace even after the death of her best friend she kept her promises. I am dying to see what happens in the third book because so much has happened and so much is about to happen.

I want to say this as Anna was reading the journals she realized how much she loves Julian and I can't wait for book three to see if they get their HEA. In book three someone will come back into Anna's life and shake it up can her love for Julian survive? Will Julian still love Anna once the truth is out in the open? What will happen to Bill and Lexy? I have to give a huge KUDOS to Leigh because she knows how to write a story like no one's business! 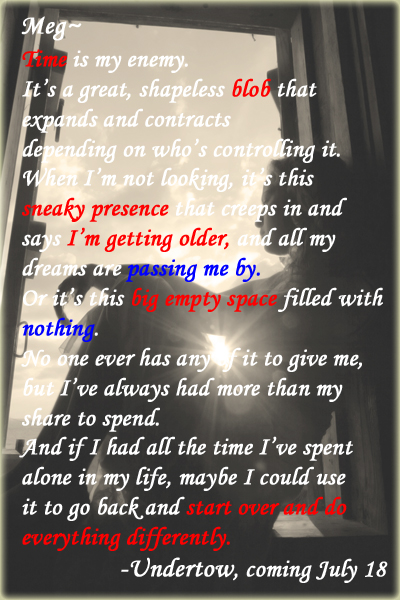 Three bad things I learned this year:
-People you trust lie, even parents.
-That hot guy, the one who’s totally into you, he might not be the one.
-Things are not always how they appear.

Three good things I learned this year:
-Best friends are always there for you, even when they’re far away.
-That other hot guy, the one who remembers your birthday, he just might be the one.
-Oh, and things are not always how they appear.

Anna Sanders expected an anonymous (and uneventful) senior year until she crossed paths with rich-and-sexy Jack Kyser and his twin sister Lucy.

Pulling Anna into their extravagant lifestyle on the Gulf Coast, Lucy pushed Anna outside her comfort zone, and Jack showed her feelings she’d never experienced... Until he mysteriously withdrew.

Anna turned to her internship at the city paper and to her old attraction for Julian, a handsome local artist and rising star, for distraction. But both led to her discovery of a decades-old secret closely guarded by the twins’ distant, single father.

A secret that could permanently change all their lives.

HOLY MOTHER OF PEARL! This is the first thing that comes to mind after I read Dragonfly. Leigh has such a way of writing that it draws you in and you can't help but be swept into a current and keep holding your breath until the last page has finished and you end up thinking Holy Hell what did I just read! I have to say right from the first page I was captivated by Dragonfly because it is a read like no other. There are so many twists and turns and secrets that with every page turn I was jumping for joy because I needed to get my mind wrapped around everything that was happening.

Dragonfly is a story about love, lies, and secrets and how things are not always as they seem. Anna is living a quiet life. She does not like where she is living and her only best friend and friend has moved away so she has to do senior by herself or so she thinks. While at the beach before her senior year is supposed to happen she meets the twins Jack and Lucy. They are beautiful and so full of life.

On her first day of school she is excited because she is part of the school newspaper and she just found out that Jack and Lucy are going to school with her. Anna is quiet so she does not talk to many people but she is excited to know that Jack and Lucy are going to school with her. She is totally crushing on Jack because he makes her feel things she has never felt before but all is not well in paradise because Jack is so hot and cold with her and he puts her through some serious crap but she puts up with it until she realizes that she can do better. Enters my love Julian he is the school bad boy artist who is hotter than Hades and maybe just maybe holding a flame for Anna.

While Anna is working on something for the school paper she uncovers something that may break this town apart. At first she is not sure what to do about but with the help of Julian Anna will make some tough decisions and when the secrets and lies all come to the forefront Anna is left reeling with what the consequences will be. She has unearthed secrets and lies that have been hidden and people want that to stay that way and they will do anything to keep it that way. What did Anna uncover? What will happen between her and Jack? Will Julian be there for her? All these things you will find out when you read Dragonfly and I promise you you will not be disappointed!

SO excited to share this new series with you guys!

It's romantic and steamy and soapy and sexy, and it's all set at the beach...

Series books will come out in close succession, so minimal waiting:

I'm the hat lady--wife, mom, reader, writer, caffeine addict, chocoholic, southern expat, and beach bum.
*LIKE my Facebook page for daily updates, new release announcements, and sale info!
*SIGN UP for my newsletter for new release announcements! (not spam)
*I LOVE hearing from readers! Send feedback, ask questions, or say hello at leightmoore(at)gmail.com.
*And I share books I think RULE right here on Goodreads! Be a friend~
* Website http://leightmoore.blogspot.com

New Release
Dragonfly is now everywhere.
Coming Soon!
Undertow (#2) will release July 18.
Watercolor (#3) will release in late-Sept/early-Oct.
Book #4 will be out by Jan 2014.

After that
Rouge #2 is on tap.
Working out the details to this untitled Paris sequel. More soon~
I'll be prepping my YA sci-fi/PNR/dystopian (?) love story 21 DAYS!

Loved this sweet story... There is a saying.. There are 3 sides to every story.. Undertow give us that. Leigh tells the story 3 character's points of view. It is a sweet love story with so much sadness.

These competitors entails lot numerous competitions that are hung on regular basis or sometimes and to gain them you need to rack up greatest facebook likes on your ID. buy geo targeted facebook likes