Welcome to my stop on the Confessions of an Almost-Girlfriend blog tour hosted by YA Bound Book Tours. Click HERE to see the full blog tour schedule! 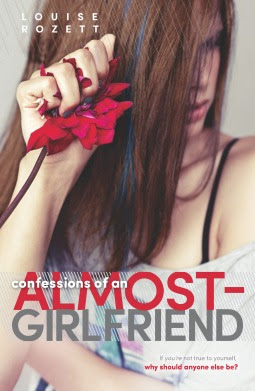 Rose Zarelli has big plans for sophomore year—everything is going to be different. This year, she’s going to be the talented singer with the killer voice, the fabulous girl with the fashionista best friend, the brainiac who refuses to let Jamie Forta jerk her around...

...but if she’s not careful, she’s also going to be the sister who misses the signals, the daughter who can only think about her own pain, the “good girl” who finds herself in mid-scandal again (because no good deed goes unpunished) and possibly worst of all...the almost-girlfriend.

When all else fails, stop looking for love and go find yourself.

Man Louise ROCKED MY SOCKS with this second book. Rose oh sweet Jesus Rose had a rough Freshmen year and she survived it by the skim of her teeth. So much has happened after losing her father but her brother and mother are coming around. So now Rose is going into her sophomore year and she has decided she will let the cards fall where they may. She cares for Jamie and even thinks she loves him but she is not going to force him to do anything. Plus she is singing and she has such a kick a$ voice that she is trying out to be in a band.

As everyone knows school is hard enough but add so serious drama between Jamie and Rose and Rose and her best friend and Lord all you can do is sit back and wish for the best. Rose knows that she has had anger issues and she is working through them but with all the drama going on at school it is hard to let go of that anger.

Will sophomore year be different for Rose? Will she get Jamie or will he stay with Regina? What will happen to her brother? What will happen to her mother? There are so many things going on in this book that at one minute I would be happy and then the next I would be yelling at the book telling Rose to smarten up and open her eyes. Things happen for a reason and in the end Rose may lose the one thing she has always wanted but she will gain one thing that will make her whole!

This is a must read series like I said before and I need book three like ASAP man I need it like I need to breathe! 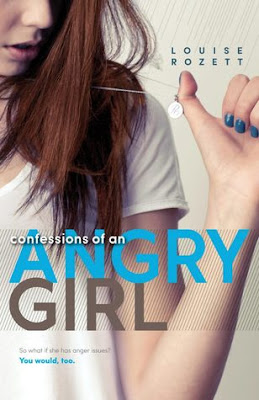 Rose Zarelli, self-proclaimed word geek and angry girl, has some confessions to make…

1. I'm livid all the time. Why? My dad died. My mom barely talks. My brother abandoned us. I think I'm allowed to be irate, don't you?

2. I make people furious regularly. Want an example? I kissed Jamie Forta, a badass guy who might be dating a cheerleader. She is nowenraged and out for blood. Mine.

3. High school might as well be Mars. My best friend has been replaced by an alien, and I see red all the time. (Mars is red and "seeing red" means being angry—get it?)

Here are some other vocab words that describe my life: Inadequate. Insufferable. Intolerable.

(Don't know what they mean? Look them up yourself.)

Confessions Of An Angry Girl is a gem of a book. I can't remember when I was 14 but I am sure I would have had the same feelings that Rose had.

Rose is angry very angry because she just lost her father and her mother has checked out and her brother Peter has abandoned her to go back to college. Well can imagine why she would be pissed off? Oh and also she is starting her freshmen year in high school. And if matters could get worse Robert Roses best friend has decided he wants to tell her that he is in love with her and wants than a friendship. The only thing is is that Rose likes Jamie which is Regina's boyfriend and older than her.

What is a girl to do? There is so much going on with Rose that she is angry and when she is angry she lashes out. She does things she would not normally do but she has no father, she has no brother, and her mother is grieving so hard she has checked out. Being a freshmen in high school and trying to make friends is also stressful so what should she do? What can she do?

This is Roses story and what a story it is. I would highly recommend reading this book.

Louise Rozett is an author, a playwright, and a recovering performer. She made her YA debut with Confessions of an Angry Girl, published by Harlequin Teen. The next book in the series, Confessions of an Almost-Girlfriend, is due out June 2013. She lives with her 120-pound Bernese Mountain dog Lester (named after Lester Freamon from THE WIRE, of course) in one of the world's greatest literary meccas, Brooklyn...and also in sunny Los Angeles. (Being bi-coastal is fun!) Visit www.Louiserozett.com for more info.

Thanks so much for hosting me, Diary of a Book Addict! And for the awesome review!

I enjoy reading article. Hope i can find more articles like this one. Thanks for posting. If you love pets, let visit game sims 4 cheats to create a wonderful pet