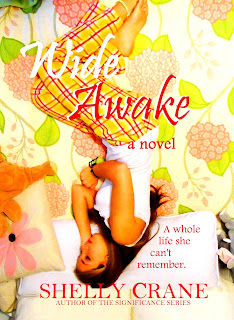 A life she can't remember.

When Emma Walker wakes up in the hospital with no knowledge of how she got there, she learns that she's been in a coma for six months. Strangers show up and claim to be her parents, but she can't remember them. She can't remember anyone. Not her friends, not even her boyfriend. Even though she can't remember, everyone wants her to just pick up where she left off, but what she learns about the 'old her' makes her start to wish she'd never woken up. Her boyfriend breaks up with the new girl he's dating to be with her, her parents want her to start planning for college, her friends want their leader back, and her physical therapist with the hazel eyes keeps his distance to save his position at the hospital.

Will she ever feel like she recognizes the girl in the mirror?

ADD WIDE AWAKE TO YOUR MUST READ LIST
http://www.goodreads.com/book/show/15810336-wide-awake

Someone was speaking. No, he was yelling. It sounded angry, but my body refused to cooperate with my commands to open my eyes and be nosy. I tried to move my arms and again, there was no help from my limbs. It didn't strike me as odd until then.

I heard, "All I'm saying is that you need to be on time from now on." Then a slammed door startled me. I felt my lungs suck in breath that burned and hissed unlike anything I'd ever felt before. It was as if my lungs no longer performed that function and were protesting.

Then I heard a noise, a gaspy sound, and my cheek was touched by warm fingers. "Emma?" I tried to pry my eyes and felt the glue that seemed to hold them hostage begin to let go. "Emma?"

Who was Emma? I felt the first sliver of light and tried to lift my arm to shield myself, but it wouldn't budge. Whoever was in the room with me must've seen me squint, because the light was doused almost immediately to a soft glow. My eyelids fluttered without strength. I tried to focus on the boy before me. Or maybe he was a man. He was somewhere in between. I didn't know who he was, but he seemed shocked that I was looking up at him.

"Emma, just hold on. I'm your physical therapist and you're in the hospital. Your…" he looked back toward the door, "parents aren't here right now, but we'll call them. Don't worry."

I looked quizzically at him. What was he was going on and on about? That was when I saw the tubes on my chest connecting my face to the monitors. The beeping felt like a knife through my brain. I looked at the stranger's hazel eyes and pleaded with him to explain.

He licked his lips and said softly, "Emma, you were in an accident. You've been in a coma. They weren't sure if…you'd wake up or not."

Of everything he just said, the only thing I could think was, 'Who's Emma?'

Shelly is a YA author from a small town in Georgia and loves everything about the south. She is wife to a fantastical husband and stay at home mom to two boisterous and mischievous boys who keep her on her toes. They currently reside in everywhere USA as they happily travel all over with her husband's job. She loves to spend time with her family, binge on candy corn, go out to eat at new restaurants, buy paperbacks at little bookstores, site see in the new areas they travel to, listen to music everywhere and also LOVES to read.