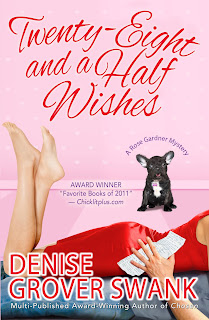 For Rose Gardner, working at the DMV on a Friday afternoon is bad even before she sees a vision of herself dead. She's had plenty of visions, usually boring ones like someone's toilet's overflowed, but she's never seen one of herself before. When her overbearing momma winds up murdered on her sofa instead, two things are certain: There isn't enough hydrogen peroxide in the state of Arkansas to get that stain out, and Rose is the prime suspect.

Rose realizes she's wasted twenty-four years of living and makes a list on the back of a Wal-Mart receipt: twenty-eight things she wants to accomplish before her vision comes true. She's well on her way with the help of her next door neighbor Joe, who has no trouble teaching Rose the rules of drinking, but won't help with number fifteen-- do more with a man. Joe's new to town, but it doesn't take a vision for Rose to realize he's got plenty secrets of his own.

Somebody thinks Rose has something they want and they'll do anything to get it. Her house is broken into, someone else she knows is murdered, and suddenly, dying a virgin in the Fenton County jail isn't her biggest worry after all.


First I would like to thank AToMR Blog Tours for allowing me to be a part of this blog tour. I have to say I have never laughed so hard reading a romance slash murder mystery. Denise Grover Swank has such a way of writing that it draws you in and you can't help but laugh and cry.

Rose is not your average girl. She lives with her mother and has never dated or had a boyfriend. She is different from the average person in that she has the sight and sees visions. Her visions are usually silly little things until she meets Daniel Crocker. She starts to see visions of her death. Scared out of her mind about this vision because she has never had a serious vision she goes home only to find her mother dead.

She is the main suspect in her mother's murder and she has to prove her innocence. As she continues to have her visions of her own death she decides she is going to write a bucket list and on the back of a Wal-Mart receipt she lists her 28 wishes. In order to fulfill her wishes she enlists the help of her next door neighbor Joe. Joe is kinda mysterious in his own way and she guesses he is keeping secrets of his own. Will she be able to get through her bucket list of wishes? Will the real murderer be caught? Will she be able to stop the visions of her death?

Come along for a fantastic story ride! What will happen to Rose after her twenty eight wishes will she make it to twenty nine? 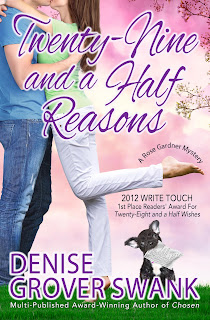 When Rose reports for Fenton County jury duty she figures she’s lucky to get out of a morning working at the DMV. Instead, despite a disastrous encounter with the new assistant district attorney, Mason Deveraux, she’s picked as a juror on a murder case. As the trial progresses, she realizes an ominous vision she had in the men’s restroom proves the defendant is innocent. And there’s not a cotton picking thing she can do about it.

As if things weren’t bad enough, Rose’s older sister Violet is going through a mid-life crisis. Violet insists that Rose stop seeing her sexy new boyfriend, Arkansas state detective Joe Simmons and date other men. Rose is done letting people boss her around, but she can’t commit to Joe either. Still, Rose isn’t about to let the best thing in her life slip away.

5 OF 5 DMV'S AND COURTHOUSES

Twenty Nine and a Half Reasons is a great follow up to Twenty Eight and a Half Wishes. Thank you to AToMR Blog Tours for allowing me to be on this blog tour. I laughed the entire time I was reading this book. Rose is a trip and her sister is even funnier.The murder mystery was just right to.

In Twenty-Nine and a Half Reasons We get to see Rose again in action. She is working a droll job at The DMV when she gets a notice in the mail that she must report to the courthouse for Jury Duty. She is excited to have a day off so she thinks until she reaches the court house and bumps into the New District Attorney Mason. She is not a fan of his right now and it showed.

Once she is inside the courthouse and ready to see if she is picked for jury duty she has one of her visions. In this vision she can see that the man on trial is innocent. But how can she prove he is innocent? What is she to do go into the courtroom and yell that she had a vision and this man is innocent. NO WAY they would lock her up and throw away the key. So she has to find a way to get this guy off because he is the wrong man.

Then to make matters worse Rose's older sister Violet is going through a mid-life crisis and is nagging poor Rose to break up with her awesome new boyfriend Joe who just happens to be a detective. Violet tries everything under the sun to break them up but Rose is determined to have a normal life. What is a girl to do about her sister? Will Rose be able to prove that man's innocence? 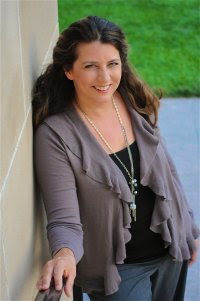 Denise is a single mom who lives in Lee’s Summit, Missouri raising five of her six kids. (The oldest has gone off to live on his own.) She loves to embarrass her children whether it be spontaneous dance parties in the kitchen or making her teens’ friends think she’s funny/cool. *gasp* (Even if its in her own mind.) On rare occasions, she is known to post stories about her crazy life on her family blog There’s Always Room for One More.She keeps her sanity by creating worlds to escape to and characters to hang out with.

I love the sound of this, I'll be giving it a try soon

Thank you so much for taking part in my blog tour. I'm so happy you loved both books!!! <#

Denise,
Thank you I loved both books! Great summer read :)