Prim and proper art gallery coordinator Elle Walser is no good at seducing men. Heck, she’s been throwing hints at her boss for months, but he’s completely clueless. Desperate to escape her mother’s matchmaking efforts, she comes up with a plan—buy some lingerie and climb into her boss’s bed. The plan goes brilliantly…until she accidentally seduces a sexy stranger instead.

Bad boy nightclub mogul Gabe Schultz just had the best almost-sex of his life. Too bad the smoking hot blonde thought he was his brother and bolted before he could finish what they started. Though her holier-than-thou attitude puts a serious damper on his mood, Gabe’s never been one to give up on something he wants. And he wants Elle. But does a man who lives on the dark side really have a chance with a proper lady?

Entangled has done it again! I can't say enough about this book because I started to read it and I could not put it down. Elle and Gabe sizzle from the very beginning and they only get better as time passes.

Elle is as straight as you come. She is Mrs Manners and I love it! She suppresses her feelings for her boss until one day she decides she is going to tell Nathan her boss just how she feels. The only thing is is that Elle is shy and she has been dropping hints to Nathan that she is into him and he has not acknowledged them. So she hatches a plan to sneak in his bed one night and seduce him.She is dressed in lingerie and sneaks up to his bedroom and enters his bed. She starts kissing him and getting ready to sleep with him when she realizes that the man in the bed is not her boss Nathan but a complete stranger. As she figures this out she high tails it out of there because she is so embarrassed. How could she not have realized that the man she was kissing and doing other things to was not Nathan?

Gabe is Nathan's older brother and back in town for a few months to check on his night clubs and get a break. When he is sleeping he thinks he is having a great dream because he is dreaming about a girl whispering and kissing him only when he opens his eyes a woman is there. They kiss and when Gabe asks her something she bolts. He isn't sure what just happened but he knows he has to have that girl. She is like sunshine to his cloudy day. She is something special and he wants her real bad. The only thing is will he find out who she is? Will they be together? Can he change his bad boy ways? Can he commit and be with one girl? Will Elle let her guard down?

Come along for the greatest ride of a lifetime with some swoon worthy men! Entangled I said it before but I will say it again you guys have the corner market on romance! 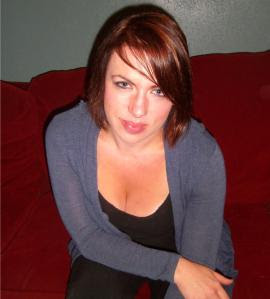 Katee Robert learned to tell stories at her grandpa’s knee. Her favorites then were the rather epic adventures of The Three Bears, but at age twelve she discovered romance novels and never looked back.

Though she dabbled in writing, life got in the way—as it often does—and she spent a few years traveling, living in both Philadelphia and Germany. In between traveling and raising her two wee ones, she had the crazy idea that she’d like to write a book and try to get published.

Her first novel was an epic fantasy that, God willing, will never see the light of day. From there, she dabbled in YA and horror, before finally finding speculative romance. Because, really, who wouldn’t want to write entire books about the smoking-hot relationships between two people?

She now spends her time—when not lost in Far Reach worlds—playing imaginary games with her wee ones, writing, ogling men, and planning for the inevitable zombie apocalypse.

Today we have a special treat instore for all you Entangled Publishing fans! Today we have with us the lovely Katee Robert author of Wrong Bed, Right Guy. I am so excited to be interviewing you Katee. I have to say that Entangled Publishing is blowing up the market on sexy book reads. All of us middle aged women are eating up everything you great authors have to give us.

What was the inspiration for writing Wrong Bed, Right Guy?

I wanted to write a book about a good girl sneaking into the wrong bed. So much of this book is a result of my ridiculous impulse to torture Elle. She’s such a priss in some ways, and I had a blast tossing her into situations where she’d be in over her head.

Why was Nathan so clueless about how Elle Felt for him?

Well, Nathan has his own past and he’s very much wrapped up in the memory of someone else. As a result, he doesn’t really SEE other women. Sure, he dates (mostly to get Gabe off his back), but he’s totally haunted by past events.

What was really going on in Elle’s mind when she realized it was someone else in the bed?

Something along the lines of OMG OMG OMG OMG OMG OMG NOOOOOOES. My darling Elle is a wee bit of a drama queen. That said, most people would flip if they found themselves all naked-like with someone they weren’t intending (though, if Gabe was in my bed, I’d be all about it).

What was Gabe thinking when Elle came in the bed with that Lingerie on?

“Holy shit, what is this chick wearing?” Because, really, who tries to seduce a man in lingerie that even my mother wouldn’t wear (sorry Mom! I’m sure you have really nice taste in….Oh God, I need brain bleach).

Did Gabe really think Elle would be his girl? He has that whole bad boy persona and Elle definitely did not want any part of that.

Gabe has been living the fast life for a while. He’s tired. Elle is like a foreign creature to him and he can’t help but wonder if she’s the answer to this overwhelming feeling of loneliness he’s been dealing with. He might be a bad boy, but he’s a real good man (and now I have that song in my head).

What songs inspired you to keep writing?
For some reason, I could only listen to Evanescence while writing this book. I have no idea. It doesn’t really fit the tone at all, but there it is.

Have you ever fallen for a bad boy?

Oh, yes. Many, many times. It’s never quite worked out for me like it did for Elle. LOL

Was Gabe inspired by someone close to you?

Not really. He’s very much a creature of his own making, and I’ll totally admit that I kind of wish he existed in real life.

Can you give us some random facts about Gabe and Elle that did not make it in the book?

Elle was quite literally a country corn princess in high school. She won both Homecoming and Prom. Gabe wasn’t big into the whole high school thing, but he busted his ass and was planning on going away to college. He never told anyone about it, because it was a moot point, but traveling was always his dream. Now he gets to do it for the nightclubs.

Will we see more of them or do you plan on writing other books?

Yep! Both Elle and Gabe will be on Come Undone #2 (along with Roxanne, Ian and Nathan). Trust me, you do not want to miss this one. ;)

Thank you again Katee for taking the time to visit with us! You have given an inside ***SWOON*** on the HOTTEST men this summer!

WANT TO WIN A COPY OF WRONG BED, RIGHT GUY AND A 30.00 VICTORIA SECRETS GIFT CARD WELL ENTER TO WIN BELOW