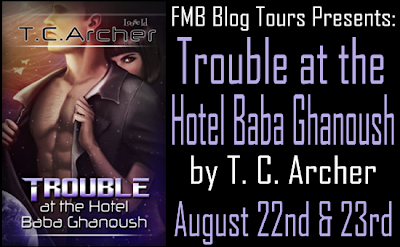 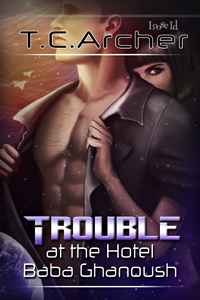 
Book Description
"Enforcer Fontana Marks is on vacation undercover until she has to testify against the Track Cartel for crimes against the Galactic Coalition. But the cartel is hiding something, and Fontana intends to find out what--then make them pay for murdering Jenny, the young scientist Fontana failed to protect on a previous assignment.

The last thing Fontana intends to do while vacationing incognito on the fantasy resort Sagitariun is follow the advice of her superior. "Rest, recuperate, and find a man."

But how can a woman resist a blond, blue-eyed, chisel-jawed, great-assed man streaking naked in public when he's obviously running from someone? And why can't she to get rid of the damned trench coat she stole to rescue him?"

Fontana spotted trouble when the man first burst into Spacer Jack’s Bar and Grill. It wasn’t his chiseled jaw and blond hair or the way he scanned the joint with his intense blue eyes. No, the trouble was—he was naked. The towel wrapped around his slim hips had snagged on the swinging bar door when he entered, and he didn’t look back in his sprint toward the kitchen. He shot past where Fontana sat at the bar, his muscular ass bunching with the effort of his long strides.

Her pulse jumped. If that's trouble, I want some.

The naked man disappeared through the kitchen doors. A collision of bodies sounded.

Fontana straightened. How was a woman to mind her own business when a nude man was in trouble? She shoved off the corner stool and dashed after the naked man, swiping a man’s trench coat off the coatrack standing beside the kitchen door. She pushed through the swinging door and halted centimeters from where the naked man lay sprawled on top of a waiter. A tray of pasta entrées hovered on its anti-grav suspension, where the waiter would have been holding it in his upturned hand before the man rammed into him.

In all her years of undercover work, she had never come across a situation quite like this. And probably wouldn’t again.

Fontana seized the naked man’s arm, hauled him to his feet, and threw the coat over his shoulders as she bolted with him toward the rear exit. She dragged him through the back door, and they practically fell into the back alley by the dumpsters. A furry rodent skittered from nearby tin cans and disappeared behind a stack of pallets. She couldn’t help a smile. The alley was a replica of mid-twentieth-century Earth, complete with robo-rats and all.

She grasped the man’s shoulders and shoved him against the restaurant wall. Her pulse sped up when the steely muscles beneath her fingers tensed. How was it possible for his hard body to get any harder? She’d seen Aslothian gladiators with less muscle. His blue-eyed gaze locked on to hers.

Fontana ignored the tremor that rippled through her, pressed her body against his solid two meter frame, and demanded, “What the hell is going on?”

His cock pulsed against her abdomen and began to thicken. This diversion was exactly what her superior, Colonel Stephaney Lyons, had ordered. “Find a man and reaffirm life. Let him fuck your brains out.” The colonel wasn’t usually one for getting quite so personal or so crude, but she knew how angry Fontana was about Jenny’s death and the failure of the mission on Rigil IV.

The naked man grasped her shoulders and drew her closer. “Who are you?” His drawl belied the intensity of his stare.

Well, well, a man who knew how to pace himself. Fontana slipped a hand between them and wrapped her fingers around his erection. Her mouth went dry. He was hard as a rock. She squeezed the thick rod. He hardened even more beneath her fingers.

“I’m asking the questions.” Damn if she didn’t sound like Detective Friday from the twentieth-century series Dragnet. Dragnet’s brand of law was before the Criminal Rights Act of 2141.

“Who are you running from?”

“Maybe I should be running from you.”

“Not while I have hold of this.” She yanked his cock with just enough force to keep his attention.

He sucked in a breath.

Now she had him. “I can play yanky-panky all night.”

His shaft throbbed, and his warm hands slid down her arms, stopping to rest on her hips. Long fingers flexed against her carbon-fiber parachute pants. That and the halter she wore were a woman’s standard garb in Spacers. She released him when he rolled her mound against his rod. Fontana grasped his arms and angled her hips so that the steely length slid along her clit. He groaned, and the sound sent butterflies skittering across the inside of her stomach.

About the Author:
T. C. Archer is comprised of award winning authors Evan Trevane and Shawn M. Casey. They live in the Northeast.

Evan puts his Ph.D. to good use by writing about alternate realities, and Shawn channels the mythology and philosophy she studied during her wasted youth into writing about exotic places and times.