The Weight of Night By C.L. Stegall Blog Tour Stop 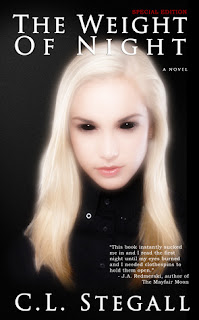 When her mother is taken from her in a terrible accident, 18-year-old Alexis finds herself facing some previously unknown truths. Her best friend, Keats, is her only confidante when she is faced with an apparent stalker who claims that Alexis’ entire life is built around a lie. Keats keeps the leap-before-you-look Alexis grounded as they are suddenly thrown into a whirlwind world of danger and secret agendas and the viciously deceitful lives of demigods and ancient Greek deities.

When a conniving, self-righteous god decides that Alexis is his best hope for retrieving a powerful artifact, she finds herself on the self-discovery journey of a lifetime - tracking a killer and a kidnapper - and facing twisted and dangerous foes along the way.

With lives in the balance, Alexis will have to come to grips with who she truly is and just what she might be capable of. Growing more and more dangerous herself, she will have to try and survive long enough to save the one person in the world for whom she cares most.

The Special Edition of The Weight Of Night also includes:

Trinkets And Arrows - Life is not simple for Lily Abrams, a seventeen year old thief living in Encino. When her reputation derails her living arrangements, she knows what she has to do. She takes a job to steal a bag of rare coins from a suburban home, unaware of the danger lying within. Secrets as old as Ancient Greece are kept hidden in the middle of Los Angeles. After Lily crosses the wrong man, stealing his prized belongings, she makes a deadly enemy and pays the price. Rescued from death by none other than the actual Greek god, Apollo, Lily is manipulated into making an unbreakable deal with a god. He will teach her everything she needs to know about who she is, and what she is capable of; but, first, she must face a vengeful enemy.

Soldier Boy - In St. Anne’s Care Facility, in upstate New York, a son of the Greek God of War tells the story of his one true love to a girl who cannot even remember his name.

Aaron Richardson has just been released from the army when, at the train station in New York, he literally runs into Rose, a 15 year old girl with a sharp tongue and an even sharper mind. It is immediately evident that he has met his match. In learning who they are to each other, Aaron and Rose face emotional turmoil and terrible tragedy. In the end, the tale is told and the truth will be revealed. Can love truly conquer all?

MY REVIEW
5 OF 5 DEMIGODS AND DEITIES
Where to begin with this review...... First off I have to say thank you to AToMR Blog Tours for allowing to be a part of this tour and for allowing me to read this incredible story I would have never read because before the tour I never heard of this book. I am not sure why I have not heard about this book but C.L. has created such a story I stayed up late into the early morning finishing the book because I just had to see what happened.

C.L. has created this mythology world where the Gods are not the center of the story but instead the Demigods, and Deities are the focal point. If anyone knows anything ab out me you know I LOVE Mythology. I can sit in the museum and look at all the paintings and artifacts that come from that time. While I was reading TWON I felt like I was there right there with Alexis and Keats. This is very important for me because if I can't relate Houston we have a problem. But TWON has me there right there with Alexis and Keats and all the demigods and deities.

As Alexis faces all this turmoil she finds out that a God wants her to find an ancient artifact. Alexis agrees to help and on this journey she discovers all the secrets that have been hidden from her. She faces all her issues and secrets head on and will have to learn to come to terms with who she is and what she is meant to do.Keats is her perfect balance for this seeing as Alexis is impulsive while Keats is the level headed thinker. This is Mythology at it's best because I love reading about the demigods who never get enough air time for me.

In the end the ultimate question is what will Alexis do when she finds out she has hidden powers? Will she use them for good or evil? Come along on a mythological ride and see what it means to really trust and follow your heart.

C.L. Stegall is a Dallas-based author. He was born in North Carolina but will always call southern California home. He spent ten years in the U.S. Army, as both an engineer and a linguist for Military Intelligence. He has written innumerable short stories and novellas. His latest novel is a Special Edition of "The Weight Of Night", which contains two additional tales of the Progeny, "Trinkets And Arrows" and "Soldier Boy."

He is also the Editor of - and author in - 4POCALYPSE: Four Tales Of A Dark Future.

Thanks so much for the wonderful review! I'm thrilled that you enjoyed the book. There will be many more adventures with the Progeny, I promise!

This looks like a great book. I can't wait to get a copy of my own.

My favorite story of all time is Alice in Wonderland.

Thank you for the great giveaway!