GCR Presents A Book Blitz For Overexposed by Adrianne James 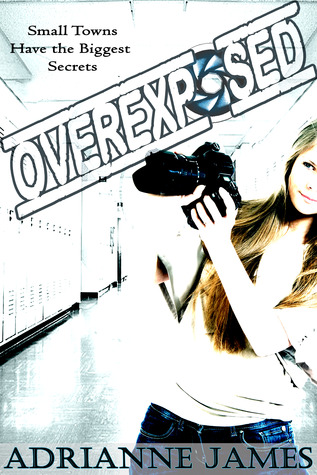 In the tiny town of Willowspring, just about nothing ever happens except for layoffs, hockey games, and your average melodramatic teenage angst.

But that was before.

Vi, Ashley, and Macy are just trying to make it through the school year without one more humiliation when they team up for a simple photography assignment: create a story through a series of photographs. Can't be too much trouble, right?

The shutterbugs happen upon Willowspring High School's darkest secret. When everything around them starts to crumble after trying to do the right thing, their only hope is to stick together.

When the door opened to the alley behind the rink, I realized two things. One, it was freaking colder outside than it was in the bleachers by the ice, and two, Brianna Jones (A.K.A Bra stuffer) was already out there.

The three of us walked out as if it was perfectly normal to be there but Brianna didn’t even notice us. We walked to the opposite side of the alley and huddled together. We hoped it would look like we were keeping warm, but we were trying to hide both the cameras.

Watching Brianna was rather dull. She was just standing there, talking on her cell phone and it wasn’t even anything remotely interesting. We took pictures anyway, because like Mr. Bennett said, you need the before, during, and after to tell a story with photographs.

“Look! She is checking that car’s doors! That isn’t her car, is it?” The quiet clicking of the shutters on our cameras was almost deafening to me. I swore each click was louder and louder as we watched Brianna try to break into a car.

Finally, the last door she tried, the back passenger side, was open. She slipped in and a second later, the dark car had a red glow inside. She climbed back out, shut the door, and walked over to the wall, smoking a stolen cigarette.

“She just broke into someone’s car for a cigarette? Seriously?” Ashley was just as flabbergasted as the rest of us. Why would anyone risk committing a crime for a smoke? “Oh! She is moving again!”

Click, click, click. I took more and more pictures. I hated that they were all from the same angle, but spys have to do what they have to do to keep from being caught, all the while still getting the images.

Brianna walked back to the car and put the cigarette out on the hood. Lucky for whoever owned it there was a layer of snow to put it out before it could burn the paint. Then she leaned over and used the mirror. She pursed her lips, showed her teeth to check those, then she lifted her head slightly.

“What is she doing?” I whispered.

“I’m not sure.” Macy said breaking away from the group. “I am going over there, different angle.” Before I could stop her, she had gone back across the alley to the other side. She was braver than I was. Ashley watched her closely before turning back to me.

“Let me take some. I promise I won’t hurt Jilly.” I knew I had to hand it over. I promised her she could use it. Even knowing that, it didn’t make it any easier.

“Okay. Here.” I took the strap from around my neck and quickly placed it around hers. The minute the fabric was firmly against her skin, she took off, too. “Ash, what are you doing?” I whisper yelled to her.

She just put a finger over her mouth to shush me and she got even closer to the car than Macy had. I figured that made me look out so I opened my eyes and ears and tried to make sure my best friends didn’t get caught.

I looked over my shoulder to check the door to make sure we were still alone when all of a sudden I heard a scream.

“YOU LITTLE BITCH! GIVE ME THAT CAMERA NOW!” When I turned back to see what was going on (although I was pretty sure that either Macy or Ashley had been caught by Brianna) I saw my girls running towards me, with Brianna not far behind.

“Run!” Ash and Macy yelled through giggles. I turned and headed to the door and held it open for them. As soon as they passed through I closed it and the three of us went straight out the front door and to Macy’s truck.

I died laughing. Brianna Jones was a booger eater. I bet her boyfriend would love to know that.

“Oh, Ashley, you are amazing!” Then the truck erupted in laughter and because Macy’s dad had given her a twenty to get food at the overly expensive rink, we headed to the diner for some hot cocoa and French fries for half the cost. Who said teenagers were irresponsible with money? 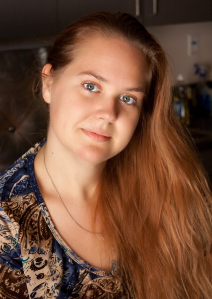 Growing up, Adrianne couldn't get her hands on enough books to satisfy her need for the make believe. If she finished a novel and didn't have a new one ready and waiting for her, she began to create her own tales of magic and wonder. Now, as an adult, books still make up majority of her free time, and now her tales get written down to be shared with the world.

During the day, Adrianne uses her camera to capture life's stories for clients of all ages and at night, after her two children are tucked in bed; she devotes herself to her written work. Adrianne is living the life she always wanted, surrounded by art and beauty, the written word and a loving family.

As a young adult and new adult author, Adrianne James has plans to bring stories of growing characters, a little romance, and perhaps a little magic and mythology down the line for her readers to enjoy.