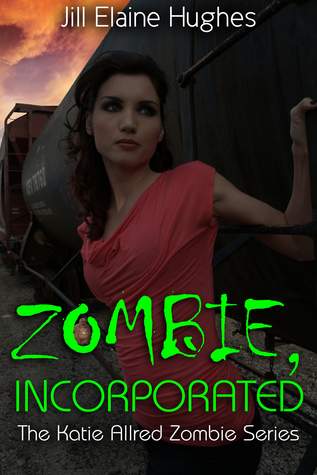 Eighteen-year-old Katie Allred is socially awkward and unpopular at school. The only child of parents who had her right out of high school, Katie is herself about to leave the nest, even though she hardly feels ready.

Katie’s new after-school job at the Zimble Box Corporation draws her into the complex social strata of high school cliques and backstabbing friends in ways she never imagined. Katie soon discovers there’s something very strange about the “in” crowd at school---and about her employer, too. Shortly after starting her new job, the Contagion breaks out, plunging her town and the entire nation into chaos as zombie shadow forces come out into the open, ravaging the streets. Katie goes into hiding and her parents disappear, along with almost everyone else she knows.

But Katie soon discovers she has special powers that help her survive. She’s a Beacon, someone with the innate ability to help zombies produce children. It’s a power her employer — and what little remains of the U.S. government — both want to exploit for their own ends. Not only that, it runs in her family---which has a secret past Katie never knew about until now.

Enter Agent Morehouse of the FBI Special Zombie Control Unit. A reformed zombie working undercover, he suppresses his urge to eat human flesh in order to serve and save humanity. But Agent Morehouse can’t help but be attracted to a Beacon like Katie, and she to him. Even as they fight zombies the world over, they must fight their intense attraction to each other, hoping to keep Katie from suffering Agent Morehouse’s terrible zombie fate.

I guess if I really thought hard about it, Mom was right.  The zombie apocalypse was my fault.  Everything was my fault.  I’d ruined her life, and now she wanted me out of it. All the mean underhanded comments over the years, all the passive-aggressive decisions to spend money on herself instead of me, their decision not to plan for my future, all the not-so-subtle hints to get the hell out of her house and become somebody else’s problem----it all made perfect sense now.

I could take a hint.  I knew where I wasn’t wanted.  And somehow I figured I’d have a better chance of surviving the coming onslaught of the Undead if I was on my own.  Conventional wisdom says there’s safety in numbers, but I’d watched enough horror movies to know that sometimes it’s best to fly solo.

I went to the bookcase and dragged over a milk crate to stand on so I could reach the top shelf. I reached behind the main part of the bookcase to the secret compartment I knew was behind it, the same secret compartment where I’d hidden candy and comic books as part of a treasure hunt game I’d used to play alone as a little girl.  My fingertips felt around until they touched the smooth, cold gunmetal.  I wrapped my fingers around the pistol, pulled it out, inspected it.  It was a lot heavier than I’d expected, yet it still seemed small, too small to be something that could explode and kill someone----or something----in less than a second. The lines of Dad’s semiautomatic Glock were sleek, almost animal-like in their curvature. I didn’t know what I was doing, but on sheer instinct my finger pressed a tiny switch on the spine of the weapon and the chamber popped open, revealing a bullet.  I popped the chamber closed, pressed another switch and the clip fell out into my hand.  I inspected that, studied it, worked out in my head how its various components connected with various components inside the gun which, when the trigger was pulled, would result in a projectile issuing forth, then with a flick of my wrist pushed the clip back inside its slot, heard it click.

I knew next to nothing about guns or weaponry or ballistics, other than that I knew my father stored guns in the basement and I had always been forbidden to touch them. But despite that lifetime of ignorance it seemed as if merely holding the weapon in my hand transferred all the knowledge I needed about how or why to use it directly to my brain.  As if I had a natural (maybe even a supernatural) talent for it, or a gift as my grandmother would have said. I could see all the moving parts in my mind’s eye as if they’d been there all along.

I reached back into the secret compartment and felt around again until my fingertips touched dusty cardboard.  I grabbed and pulled and came out with a heavy box of magazine clips.  Three magazines, sixteen shells to a clip. I couldn’t do the arithmetic in my head, but I knew it was a lot of bullets.  A lot, but probably not enough.  I reached and grabbed and pulled once again, and retrieved two more boxes of magazines.  Lots and lots of bullets now.  I hoped I’d never have to use them, but just to hold them in my hand felt like a good life insurance policy.

I stood and turned my newfound possessions over and over in my hands, studying the switches and gears, memorizing where the safety was and mentally practicing how to disengage and re-engage it. I read the instructions and warnings on the sides of the magazine boxes, noted how they said that semiautomatic-loading weapons were illegal in many states, and the manufacturer had no liability for any physical or legal consequences for any injury or death resulting from improper (or proper? Since guns were for shooting, after all) use of its commercial products. I knew I was holding deadly force within the palm of my hands, and knew that should have scared me at least a little bit.

But it didn’t. It did the opposite.

Mom watched me do all of this without comment.  I made a point not to meet her eyes for a while, instead keeping my gaze on the gun and the shell magazines. The basement air thickened between us. The ticking sound of the air conditioner as the blower switched on automatically on the other side of the wall seemed way too loud.  We both waited for the other to speak, or at least meet a gaze. But neither of us did, and for far too long a time.

Finally, Mom broke the silence. “It’s been way more than ten minutes, and your father isn’t back yet. What do you want to do?”

“I think you should go up there after him, Katie. Take the gun with you.”

I forced myself to meet Mom’s eyes.  I saw a lifetime of disappointment behind her tinted glasses and blue-black mascara.

“You’re in a real hurry to get rid of me, aren’t you Mom?” I asked. My tone was cold, deadpan.  I was through with all the bullshit.  I just wanted my mom to tell the truth about me for once.

“I don’t know what you’re talking about.”

“Admit it. You’ve been trying to get rid of me for years.  Makes me wonder why you didn’t just get rid of me before I was born and saved yourself the trouble.”

All the color drained from Mom’s face.  “How dare you speak like that to me!”

“How dare you say straight to my face that you didn’t want me, that you never wanted me, and that I basically ruined your and Dad’s lives!” I shrieked. “Because that’s basically what you just said.”

Mom took off her glasses, pressed her palms flat against her eye sockets and choked down a sob.  “Katie, you’re reading way too much into this.  Your father and I----we made a lot of sacrifices for you.  Most people who became parents as young as we did would never have done even a tenth of what we’ve done for you.  You should be grateful.  And I think it’s high time your father and I had some time to ourselves now that we gave up so much to raise you. Except----“

“Except now you can’t. Because of the stupid zombies.  Which I suppose are all my fault too, just like everything else is.”

Mom slumped down onto a stack of milk crates. “I never said that.”

We stared each other down for a minute or two, Mom always keeping a nervous eye on the gun.  For a split second I actually considered shooting her with it, but dismissed the idea as insane.  Plenty of teens my age think they hate their mothers, but they really don’t. It’s just a phase all young women go through.  The more I thought about it though, I didn’t hate my mother.  I honestly didn’t feel anything for her.  I was as indifferent to her now as I was to a lump of coal.  And that was far worse that hate.  After all, in order to hate someone, you have to love them first.  I wasn’t sure I ever loved Mom, and in that moment I doubted my mom ever loved me either.  Sending me off to face the zombies and my almost-certain death just proved my theory.

Mom’s face crumpled in horror. “I want you to go find your father!”

I turned on my heel and dashed up the creaky stairs, skipping the rotten ones at the bottom.  I was still missing one shoe.

I headed up to my room and packed a knapsack with one hand. Clothes, shoes, and random toiletries landed in the bag at random as I kept the gun, cocked and ready to fire, out at an angle and sweeping the air, ready for whoever and whatever might appear.