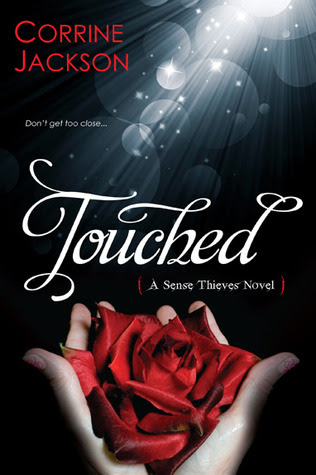 Remy O’Malley heals people with touch—but every injury she cures becomes her own. Living in a household with an abusive stepfather, she has healed untold numbers of broken bones, burns,and bruises. And then one night her stepfather goes too far.

Being sent to live with her estranged father offers a clean start and she is eager to take it. Enter Asher Blackwell. Once a Protector of Healers, Asher sacrificed his senses to become immortal. Only by killing a Healer can a Protector recover their human senses. Falling in love is against the rules between these two enemies. Because Remy has the power to make Protectors human again, and when they find out, they’ll becoming for her—if Asher doesn’t kill her first.

This is Book One in the Touched trilogy.

First I would like to Thank Kensington for sending me an ARC copy of Touched. This book comes out November 27 and I can't wait to buy a copy! I have to say that I have been a very bad girl when it comes to writing this review. I have had it all written out and then life got in the way and I got behind on my reviews. I am slowly catching up and I wanted to make sure I put this review up a week before the book comes out.

As you all know who follow me I love all sorts of genres but YA is my favorite. I love it because I get great stories and great characters to read. This book is no exception to my love-o-meter! I have to say the concept of the book and the execution of the book had me on the edge of the bed reading like crazy well into the night. I just had to see what Corrine Jackson was going to do with the characters and I was not disappointed at all. Corrine is an author I have been tracking since I read her book If I Lie. I was so captivated by this book and I have never cried and yelled so much at a book before but If I Lie was so heart and gut wrenching I just could not help it.

In Touched Corrine does an excellent job of telling the story of Remy and Asher. Remy is not your average teen girl. Yes she may look it and try to act it but she is different in so many ways. See when Remy touches someone she takes all their pain away and the pain goes into her. She can handle the pain and especially when it is her mother's pain. Her step-father hits his wife and hits Remy on a regular basis. On such day the step-father is beating his wife and Remy when the police come and bring them to the hospital. Remy's real father is called and she is sent to live with him and his new family. At first Remy is not happy but she soon realizes that she can relax there and make plans to save and move off on her own after school is done.

Then it changes one day for Remy when she goes out for a walk and sees this gorgeous guy. She watches him and she feels like she knows him but she is not sure why. She soon finds out that the boy she met on the beach is a popular boy at school and her step sister warns her to stay away from him because he is bad news. The only thing is is that Remy can't stay away from him because he continues to follow her and tries to talk to her at every turn. When Remy finally decides she has had enough she talks to him. She finds out his name is Asher Blackwell and he is her sworn enemy.

As Asher tells Remy everything she needs to know about what she is and why she is like that she can't help but feel like he is leaving something out of the picture. He is of course but he asks Remy to trust him and as much as she does not want to she does. What happens to them is an incredible story you MUST read on November 27 when it comes out. This is so fast paced that I had to keep reading because my heart was hammering in my chest with adrenalin and I needed to know what happened next.

Once upon a time, Corrine worked as a graphic designer before she switched to account management at one of the country’s top marketing agencies. She has a deep and abiding love for Anthropologie and intends to move into her nearest store when the employees aren’t looking and/or she can get her hands on a key (which she expects to find in one of their bins).

An education addict, Corrine has attended eleven different colleges, has earned bachelor’s and master’s degrees in English, and an MFA in Creative Writing from Spalding University. A recipient of a West Chester Poetry Conference scholarship, she is also the former Editor-in-Chief of two literary magazines, including Statement (CSU, Los Angeles) and Dash (CSU, Fullerton). A member of SCBWI (Society of Children’s Book Writers & Illustrators), RWA, YARWA, andAWP, she has mad skills in the kitchen, especially when it comes to pies and cupcakes.

OTHER BOOKS BY CORRINE JACKSON

A powerful debut novel about the gray space between truth and perception.

Quinn’s done the unthinkable: she kissed a guy who is not Carey, her boyfriend. And she got caught. Being branded a cheater would be bad enough, but Quinn is deemed a traitor, and shunned by all of her friends. Because Carey’s not just any guy—he’s serving in Afghanistan and revered by everyone in their small, military town.

Quinn could clear her name, but that would mean revealing secrets that she’s vowed to keep—secrets that aren’t hers to share. And when Carey goes MIA, Quinn must decide how far she’ll go to protect her boyfriend…and her promise.

First I have to say that this book is a 2012 MUST READ! This book has so many components and twists and turns that hit home for the Military wives, mothers, fathers, family members, and loved ones. This book is so gripping I read it in six hours because I could not put it down. I have family and friends who are in the Military and when they go on deployment I worry and when they come back I worry because of what has happened to them. If I Lie could be your next door neighbor or someone you know and it hits home in more ways than one.

Quinn has loved Carey for years. Carey is her rock and helps her through the storm of life. Quinn, Carey and Blake are best friends to the end. They are together forever no matter who needs what. Being the daughter of a Military Colonel is hard enough but being the daughter of the towns slut is worse. Quinn and Carey share everything and soon become a couple that is inseparable until Carey goes off to war. Coming from a Military family Carey decides to enlist in the army and serve his country. Quinn is so happy for him because she knows he wants this more than anything. A few nights before Carey is supposed ship out for deployment he has a secret he wants to tell Quinn. Once Carey tells Quinn the secret it destroys Quinn and causes their relationship to take a turn for uncharted waters.

Quinn has sworn to keep Carey she will keep his secret and be there for him no matter what happens. Then something happens between Quinn and someone and over night she becomes the town slut. She has cheated on the towns hero and she is treated like the plague. Everyone shuns her but she refuses to admit to the truth. She refuses to disclose the secret she sworn to Quinn she would keep. She kisses someone and the photo is posted on Facebook and everyone wants her to tell them who the boy is but she refuses. Alone with no one to go to she struggles daily with keeping the secret. Blake is no help and neither is Carey because he becomes a POW of war and the town can not get over Quinn's betrayal.

Her father's punishment is to have Quinn work at a Veteran's Hospital volunteering her time. That is when she meets George who is a Veteran staying at the hospital and doing a History of Veterans. With the help of Quinn George does the interviews and Quinn takes the pictures. She has come to see George as family. As the time goes on she and George share stories with other veterans so they can record each story to add to the Library Of Congress. As time goes on George also helps her to find herself and who she is instead of who everyone wants her to be.

Quinn will love hard and lose harder. She will talked about and bullied by a town whose main focus is a town hero MIA and when and if he is found what will he think about his girl he left behind that cheated on him. This story is sad and takes a look at some serious issues for people who join the army and are Gay or Lesbian. The don't ask don't tell policy applies and no matter someone says people still work around ignorance. At the end of the day people need to learn how to mind their business and stop judging people for who or what they are. If I Lie is a must read that will have you crying and laughing all at the same time.
Posted by Tee at 11/24/2012 09:47:00 PM

It's always scary purchasing books from amazon, cause you never know what you're gonna get. This book surprised me! It is well written and has just enough of everything. I like how the main character Remy evolves in the book, I don't find her wallowing in self pity like most other books I've read. Her relationships are fun and endearing! Well done! I can't wait for the next!

This book is amazing, Corrine did a great job, especially the scenes where Remy and Asher are concerned. I will suggest this book to everyone who love drama, romance, adventure.... everything you would want in a book I'd in this book. After you finished reading this book you would want to read it again and again.