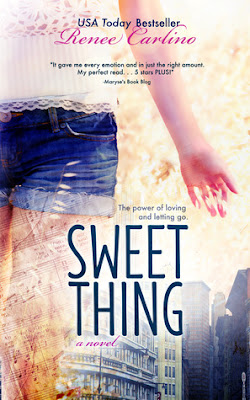 A USA TODAY bestseller, Sweet Thing tells the story of Mia Kelly, a twenty-five-year-old walking Gap ad who thinks she has life figured out when her father’s sudden death uproots her from slow-paced Ann Arbor to New York City’s bustling East Village. There she discovers her father’s spirit for life and the legacy he left behind with the help of an old café, a few eccentric friends, and one charming musician.

Will Ryan is good-looking, poetic, spontaneous, and on the brink of fame when he meets Mia, his new landlord, muse, and personal heart breaker.

A story of self-discovery and friendship, Sweet Thing shines light on the power of loving and letting go.

What reviewers are saying about Sweet Thing. . .

Jelena's Book Blog - "Her writing style is so fresh, the tone, the dialogue, the plot, the characters.... everything... just everything was marvelous she is definitely an author to watch out for."

A Love Affair With Books - "If you are looking for a new author, a new read or might want a bit of a cry, I highly recommend SWEET THING"

Book Addicts - "This book made me FEEL; it made me yearn for a happily ever after."

The SUBCLUB Books - "I was hooked and hanging on every word from the Prologue all the way to the Epilogue, I had a hard time steering my eyes away from the story it had a fierce grasp on me and I happily obliged to ride the journey alongside the characters."

Shh Moms Reading - "This is 5 HUGE stars ~ a soul searing beautifully written book that now owns a piece of my heart."

Links to the book:
Amazon:
http://www.amazon.com/Sweet-Thing-ebook/dp/B00BSY916G/ref=tmm_kin_title_0

EXCERPT 3: from Hopes and Dreams

Once I was admitted at the hospital, they gave me some pain meds and took X rays. I had a hairline fracture on the top of my foot and other than the missing toenail, that was it. It still hurt like hell. While I was waiting to get my crutches and temporary cast, I told Jenny she could go. I knew she had to go coach a tiny-tot soccer team and it was getting late. She argued with me for twenty minutes and then I said, “It’s not like you’re gonna drive the fucking cab, Jenny! I’m fine, they’re giving me Vicodin.” I convinced her to go, but not before she talked to two doctors and a nurse, verifying that I would be okay to ride home by myself.

On the way to my apartment, I asked the driver to stop at a market so I could get dinner, which consisted of wine and chocolate. When we pulled up to my building, the cabbie got out and helped me onto the curb. I stuffed my prescription, along with the wine and chocolate, into my purse and wrapped my bag around my wrist. I hobbled into the stairwell. Once inside, I looked up and saw Will sitting on the landing outside of our door. He had his legs out in front of him with his elbows resting on his propped-up knees. His head hung down with his hands tangled in his tousled hair. A fragment of light streamed over his winged forearm. He looked like a fallen angel waiting to be let back into heaven. I made my way to the bottom of the stairs. When I hoisted one of my crutches onto the first step, Will’s head jerked up. He got up and bolted down, arriving at my side in two seconds. Appraising me, he asked, “Why didn’t you call me?” He grabbed my crutches and purse and tossed them aside.

I didn’t answer him.

When he reached his arm behind my legs to scoop me up, I protested. “No, Will, just help me get up the stairs.”

“You’re a hundred fucking pounds, I can carry you,” he said and then bent down and put me over his shoulder. He smacked my ass gently as he climbed the stairs with relative ease. “You’re a stubborn woman.” Will was surprisingly strong for a thin guy and I figured it must have been from lugging the band stuff around for years. He set me down on the counter and went to retrieve my things.

When he returned, he stood between my legs at the counter with his eyes narrowed.

“Martha called me. You should have called me,” he said, looking discouraged. “What did she say?” I said, attempting to dodge the scrutiny.

“She just said you broke your foot and then she mumbled some crap about a breathing rose.”

I laughed. “That was a one-liner on friendship.”

“I guess. When I called the hospital, you were gone already. By the way, where the hell was Banker Bob?”

He squinted and shook his head. “Of course.” He looked repulsed but didn’t say anything more about it. I should have told Will that I hadn’t seen Robert in weeks, but I didn’t.

He reached down and grabbed my leg, holding it up to look at my foot, which was encased in plaster. A shudder ran through me and I realized it had been a few hours since my last pain pill. As if he could read my mind, he reached over and opened my purse, taking the paper bag out from inside.

“Wine, chocolate, and Vicodin? Really, Mia? I don’t think this is a good idea.” He was so serious it was touching, but I was really okay and I wanted him to relax.

“I’ll just have one glass, but I need a pill stat, my foot is killing me.” He got me a glass of water and handed me the meds and then he poured us both a glass of wine. “I want to get into the bath, but I can’t get my foot wet. Can you help me?” I could feel heat creeping over my cheeks. Will’s eyebrows arched and then he shot me a sexy smile. “No funny business!”

“Who, me?” he said as scooped me up. Once inside the bathroom, he set me down on the closed toilet and drew a bath. I reached over and dumped about a gallon of body wash in to make bubbles.

“Let me get undressed and I’ll call you when I’m done so you can help me in there, okay?”

“Sure,” he said and then walked out. The combination of the wine and pain meds was kicking in. Will was being perfect and respectful, but I wasn’t going to parade around naked with my foot in a cast. I wrapped a towel around myself and called him back in.

“Okay, I’ll lift you over and just leave your foot out until I can get something underneath it.” Once I was standing with one foot in the bath, he positioned towels on the side of the tub. “Mia, you’re going to have to let me see you so I can help you lie back, or

are you going to take a bath with that towel wrapped around yourself?” he said with a smirk.

“No, I can do it myself. Just turn around for a sec.” He shook his head and sighed. I tossed the towel and then slowly sat down, holding my broken foot out of the water. I thought it must have been some kind of amazing Olympic feat considering how much work it was to sit while suspending one leg in the air. Once I was in, I rested my head back on a towel and sank into the water, positioning my cast on another rolled-up towel propped on the side of the tub. The water felt heavenly and I luxuriated in the bubbles. “I’m in.”

“Do you want to get your guitar and play me something?’

“Sure… okay.” He turned on his heel and walked out. When he came back he had our wine glasses and his acoustic guitar. He never met my gaze; he just seemed undaunted. He handed me the glass and I took sip and set it on the side of the tub. As soon as he hopped up on the counter, he started strumming away. He played a long intro and then began singing the words to Van Morrison’s “Sweet Thing.” I watched him intently. He closed his eyes and let each word linger in the exquisite tone of his voice.

His face was so determined and his hands were so precise. I was feeling woozy and aroused. I made sure Will’s eyes were closed and then I closed mine and let my hand travel down my body as the sound of Will’s voice resonated everywhere in me. I moved in and around myself, imagining Will’s perfect hands on me as he sang the words:

And we shall walk and talk in gardens all misty and wet with rain And I will never, never, never grow so old again 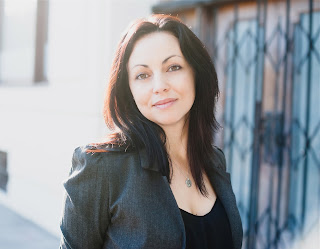 Renee’s first friends were the imaginary kind and even though her characters haven’t gone away, thankfully the delusions have. She admits she’s a wildly hopeless romantic and she blames 80’s movies staring Molly Ringwald for that. She lives in Southern California with her husband, two sons, and their sweet dog June. When she’s not at the beach with her boys or working on the next book, she likes to spend her time reading, going to concerts, and eating dark chocolate.