Harper Reagan has been through everything a woman could possibly go through. Losing her parents and entering foster care, only to be abused by her foster father. Running away at fifteen, she enters the world’s oldest profession to survive. And survive she did.

If you call abuse, counted as property and tortured to no end surviving then that was what she did…survived. Her life was spared, but at what cost. Long ago Harper had died. Today, due to those decisions she made, she is left existing with no choice to do anything else. Staring the devil in the face daily for as long as she did, left its mark and pain behind for her to live with forever.

The pain of that survival scars her deeper than any physical wound she's ever received.

Harper is finally living a better life and has a great business, friends, and a home finally her own. She will do anything to keep her past hidden, including jeopardizing her only chance at love and a truly good man.

Can Breccan show Harper who she truly is? Or will he be pushed out by the darkness she allows herself to be consumed with?

OMG Darkness Deserved is a debut for Jessica Spoon and holy shizz I can't think straight enough to write this review. I mean I am totally BLOWN AWAY by story that I cannot string my thoughts together enough to get this review done. Lord this is one F%^&$# up story that needs to be read. I mean you talk about raw open uninhibited writing shizz this is it. I mean this story is so dam intense and dark that I was hoping an praying the main character would get some light.

Harper Reagan has had a rough childhood. Her parents died and she was sent to foster care because she had no other family. While in foster care she was abused by the foster father who was the scum of the earth and I wanted to reach in this book and rip his privates off and feed it to the birds bobit style! After taking all she could take Harper runs away at fifteen and has no idea how she is going to survive so she does the only thing left to do and that is the oldest profession in the book to survive. At first she was scared but she just shut off her emotions and did what she had to do to survive on her own.

But one night she is hurt and someone saves her. Nikko is her knight in shinning armor and brings her to safety. Harper realizes she needs to get out of that profession and she does. She buys a bar and condo and starts a new life. She has great friends and is starting to rebuild her life and feel safe and secure until a gorgeous guy walks into her bar and has eyes for her. Breccan Caldwell lord have mercy is all kinds of gorgeous and make your panties wet dream come true so when he peruses Harper she knows she must stay away from him. She does not want her past being revealed so she will sacrifice her feelings for Breccan and stay away from him. But Breccan is determined to get Harper and he is a man on a mission and when she let's her walls down she is terrified and tells him they have to keep the relationship private. Well as we all know alpha males do not go for that because he wants to be with her openly so they are constantly fighting.

What happens when someone discovers who she is? Will Breccan understand then or will he high tale it out there? I have to give you a heads up because most of my book buddies hate this there is a F^&%*^% HUGE cliff hanger and I am not sure when book two comes out in September so be ware!!!!!!!!!! 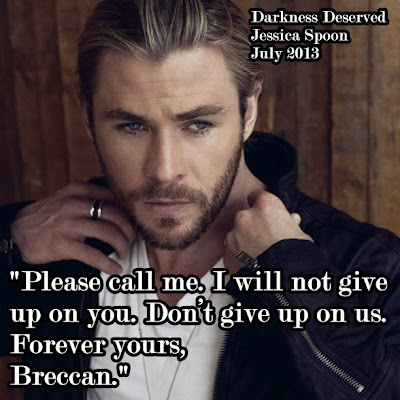 Darkness Deserved is book 1 of the Shattering The Darkness Series and will be released July 23, 2013. Darkness Found and Darkness Ascends will follow at a later date. 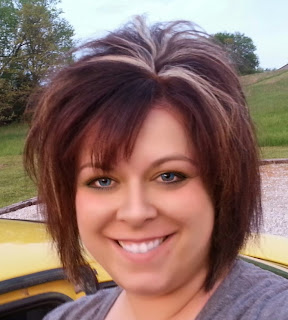 Jessica grew up in a small town in Southern Iowa. She went to nursing school and became a nurse only to realize her passion was in writing and reading. She loves to spend her time with friends and is very close with her family. It took her a long time to realize she even had a joy of reading. Once having declared there was no point when the books always became movies. At twenty four she discovered how wrong she was and became obsessed with reading and made up for lost time by doing it non stop. She began writing when dozens of ideas kept flowing through her mind that she knew she had to get out. 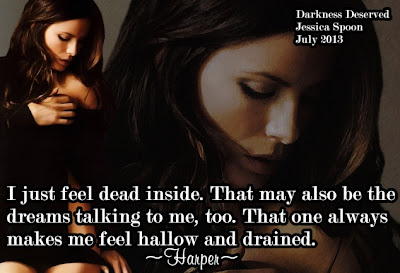 “Don’t call me that! What does that even mean? I don’t want you here! We’re done! Get-” He cuts me off as he forcefully grabs me and yanks me towards him and shoves his tongue in my mouth. He is squeezing me so tight it’s nearly painful. I refuse to kiss him back. Don’t do it Harper. Don’t! Be strong! He kisses me harder and I refuse to return it.

He reaches down and grabs my legs, then wraps them around his waist. What is with this guy and constantly wrapping me around him? Oh, shit. He’s gonna slam me into the wall again! He quickly drops to his knees and then lowers me forcefully to the floor.

He grinds his hips into me and I feel his erection on my stomach. Oh. My. God. I know I’m not gonna be able to hold out much longer. I start to push him away. It’s the hardest thing I’ve ever done. My brain is telling me to, but my body just wants to conform to his. And the son of a bitch knows it.

I’m pushing on his chest as hard as I can until he grabs my wrists and forces them above my head. He’s stretched out above me. And quite honestly, it’s the sexiest fucking thing I’ve ever seen. He continues to kiss me and I continue to refuse to reciprocate.

He grinds his hips into me again. His mouth moves from mine and trails down my jaw to my ear where he nibbles on my earlobe. He continues down my neck until he gets to the nook where it reaches my shoulder and he bites down. Hard. God, how does that feel so good? I swear I about come in my pants from it. I can’t stop the moan that escapes my lips.

“There’s my dove.” He whispers into my ear before coming back to my mouth. 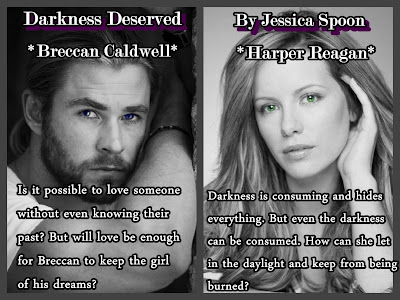 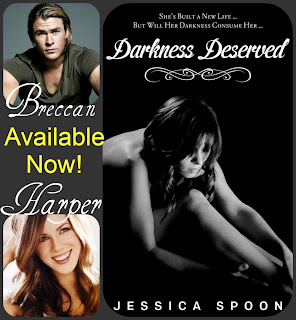