When Christian Rusch plucks Beck Ionesco from the freshman ranks for himself, she’s tempted with parties, popularity, and love. But as the free-flowing booze that soaks his world seeps into her own, Beck begins using liquid courage as a way to ignore Christian’s dark moods… and cover her anxiety about his flirtatious friend Hillman.

However, when Christian breaks up with Beck, and Hillman makes a dangerous move, no amount of alcohol can stop the pain or keep her out of trouble. And just when it seems like she’s lost everything, Beck is partnered with Jesse Leary for an art project. After spending time with him, Beck realizes it’s more than a study date… and Christian’s not happy about it. Then again, Beck’s not sure she’s happy with him, either.

But only after plowing through a bottle of wine, a wild fight, and one guardrail that becomes Christian’s last call, does Beck admit to her problem and ask for help from the one whose life secretly parallels her own.

These words don't really describe what this story did for me. Julie really knows how to write a book with so much emotion and truth that once you read it and get to the end you feel like you have been punched in the gut. I started reading Swell and I knew from the blurb that there was going to be something not so nice going on but what I found really hit home for me. Alcoholism in teens is rampant in this day and age and has always been. This story gripped me for two reasons and the first being that I had a best friend in high school who went through the same thing. She was not very popular until she started dating the captain of the soccer team. I remember us talking and she could not believe it because as she said she was a nobody. Their relationship was destructive to put it mildly but in the end he used her and sent her packing and she could not handle that after being with him for a year she drank herself to death with pure vodka. The second thing is adults and parents especially need to pay attention to their child because young love and drugs and alcohol are such an important right of passage in school for teens.

Rebecca is just your normal artsy freshmen in school. She has everything going for her until she is personally chosen by Christian the schools resident God. He has everything in Rebecca's eyes. He is popular and athletic and handsome and everyone wants to be with him but he has picked her out of all the girls. As she gets caught up in his life she soon finds herself doing things she wouldn't normally do. She is drinking and partying and telling lies to her family and friends. As her world and relationship with Christian spirals out of control Rebecca is left wondering what is going on. Christian soon breaks up with her and her drinking really does pick up. As she tries to move on Christian still has his hooks in her and her time is running out because she will do anything for her next drink.

Then school starts and she tries to out her freshmen year past her. She tries to put Christian out of her mind but he is like a bad penny and keeps coming around. Then she is art and gets partnered with the sweet and gorgeous Jesse for her project. At first she and Jesse are platonic but it soon becomes clear that Jesse has feelings for her. Rebecca realizes that she sort of does like Jesse but as always Christian is a ball of destruction and tries to put a damper on their friendship. But Rebecca has had enough of Christian and decides it is time to get help and with Jesse by her side standing by her through the worse she will find healing and rehab. What will Christian do when he realizes he has finally lost Rebecca? Will Rebecca be able to stop drinking and seek the help she needs?

This is one story I HIGHLY recommend teens read. This is a raw and true account of how teens use drugs and alcohol to ease their pain. Love hurts and sucks when your body is full of emotions and hormones but alcohol and drugs are never the way to ease the pain. Once the high wears off the problem is still there. If you are a teen and need help please please reach out for help. Someone loves you and is out there waiting to help you.

Today we have a very special guest on A Diary of a Book
Addict. I would like to welcome the very beautiful and talented Julie
Rieman Duck author of A Place in This Life, The Joy &
Torture of Joshua James, and Swell. I read A Place in This Life and I have
never ever laughed and cried so hard. I absolutely loved it! I just wasn’t to
thank you for stopping by and sharing some news about your new release Swell.

What inspired you to write Swell?

A combination of experiences I had as a teenager. My first
boyfriend broke my heart, and I turned to pretending I was a “wild one” to deal
with it all. Fortunately, I didn’t become alcohol-dependent like Beck.

Are the main characters inspired by someone close to you or an actual event that has
happened?

Yes they are inspired by many. Beck is someone I can relate
to. Christian is definitely my first boyfriend to an extent. Hillman is nobody
that I knew, but I was so taken with a picture of Queens of the Stone Age
frontman, Josh Homme, that I decided he should be in the story as how I
imagined him!

Why did Hillman want Beck?

Part possessiveness, to get back at Christian. Part actual
desire. He liked her, but he couldn’t just let that out. No. Hillman had to be
a stud and a bastard about it. The macho thing.

Why did Christian harass Beck and Jesse when he broke up with her?

Deep down, Christian didn’t want to break up with her. The
pressure was too great from his friends, and he had something hanging over his
head that he feared could destroy everything he had worked for. That doesn’t
mean he didn’t want her in his life. He was quite mad, actually, that Beck
would even consider another guy.

When did Jesse realize he had feelings for Beck?

Jesse identified with Beck when he saw what she was going through.
At first he thought he could help her, and he tried, but soon realized the
person that she was complemented his own self. That is when he fell for her.

When did Beck realize she had a problem?

Being alone in the canyon… drunk and in danger. Beck knew
that something had gone wrong, but it all went in slow-motion when she became
aware. That happens when you drink heavily. Things that seem fast when we are
sober go tick-tick-tick as they fall down. However, just because you realize
you have a problem doesn’t mean you accept it. I don’t think Beck accepted it
until after her golf course experience.

If there is one message you could give a teen about drinking what would it be?

You will not be the real you when you drink – just covering
up something about you that is too painful to share or deal with.

Did music play a roll in writing Swell?

Absolutely. I am a HUGE fan of Visual Auditory Sensory
Theatre (VAST). They are kind of an alternative rock band that is monstrous
with lyrics and emotive song.

If you could give one main song that would describe Swell what would it be?

Pretty When You Cry by VAST. I cried when I first heard the
song, right as I started writing SWELL. I
KNEW this was the emotion I was looking for. I must have played that song every
day before I sat down to write the book.


Are you currently working on a new book?

Julie once again I
want to give you a huge THANK YOU for stopping by and sharing Swell and the
gang with us!

Thank you, Tee. I enjoy hanging out with you!! 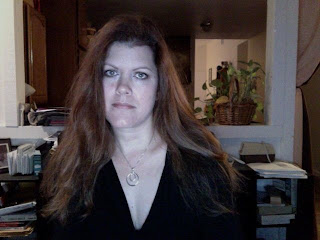 Born in Los Angeles and raised in San Clemente, California, Julie Rieman Duck wrote her way through school on an old-fashioned typewriter. Somewhere along the line, she was sidetracked by careers in magazine publishing and copywriting. While Julie honed her skills at writing print ads and articles, the stories that moved her heart and soul were bubbling underneath, waiting to escape.

It took a medical scare and the loss of her job — on the same day and within 30 minutes of each other — to finally allow her stories to free themselves and be put to paper.

Julie looks forward to writing more stories that hit where the heart beats fastest, and the soul reaches out for more.

And she blogs for YA Stands (author interviews) every other Tuesday.

Oh Tee, I so agree, this is a powerful and important story. I think everyone knows a teen a who has drank themselves to death, or at least where drinking resulted in their death or someone else's.
Also love is such a powerful thing, especially as a teen and it can be SO destructive.
I'm glad you enjoyed the book and thank you for participating in the tour!

I found Julie's book incredibly powerful as well, and think it should be part of every high school's teen issues curriculum. It confronts the real consequences of alcohol abuse, and of letting someone else define who you are. Wonderfully written! I highly recommend this book!

thanks for the great post and giveaway! Congrats on the new release!

Candace and Jennifer,
This story should be in every library! It has such a great message and poor Christian he loved Beck but that love overwhelmed him and consumed him.

I'm so happy you enjoyed the story! It wasn't easy to write simply because of how much emotion it brought up. Worth the tears, though. :-)