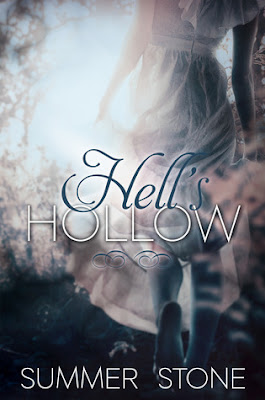 Synopsis:
When Seraphina was younger, she healed her best friend's injured hand. Terrified by the inexplicable cure, the girl shunned her. From that day on, Seraphina found herself without friends, a freak and an oddity. And so she obeyed her mother’s rule to refrain from using her innate ability, heeded her mother's warning that its use could land her in the local mental health facility alongside her aunt and grandmother.

But when sixteen-year-old Seraphina finds a mysterious, wounded boy hiding in the hollow in the woods behind her house, she can't hold out against the overpowering urge to help him. She is drawn to him each night, and as they come to know one another, their irresistible attraction blooms.

She longs to uncover his secrets — where he comes from and why he's hiding and how he came to be so wounded — and to share her own, though she knows it's forbidden. And while her healing touch seems to be helping him, it's hurting her. When the symptoms of psychosis — experienced by the women in her bloodline who used their powers — begin to plague Seraphina, she is faced with the unbearable choice of saving her sanity or the boy she’s come to love.

Purchase Links: The Book is on sale for .99
Amazon:
http://www.amazon.com/gp/product/B00BUEKIIY?ie=UTF8&tag=httpwwwgoodco-20&linkCode=as2&camp=1789&creative=9325&creativeASIN=B00BUEKIIY&SubscriptionId=1MGPYB6YW3HWK55XCGG2

AUTHOR BIO:
Summer Stone loves immersing herself in the worlds that live inside her mind. When she's in the real world, she likes kicking back on the beach, exploring new places, reading (of course) and eating rich, gooey chocolate. She loves spending time with her husband and kids, which she does as much as she can. Summer writes young adult and women's fiction, both supernatural and contemporary, realistic and looks forward to sharing her novels with you!

What inspired you to write Hell's Hollow?
It was really the name of the town that inspired me. For years, my family and I have gone up to the Sierra Foothills and there's a big street sign in a rural area, much bigger than most street signs, that says Hell's Hollow. Every time we would pass that sign, I would think, Someday I'm going to write a book about a town called Hell's Hollow. I didn't know what it would be about until I started writing it. I started with the name of the town and then with the protagonist and just let them lead me into the story.

What is your writing process like?
I need quiet to really be able to get to the sweet spot where the writing flows. So I don't listen to music and I prefer not to be at a noisy café. My best writing comes when I let the character tell me the story. With Hell's Hollow I was surprised by many elements of the storyline, none of which would have happened if I'd really tried to guess at what would come next. So listening for the voice of the characters and the voice of the story are key for me.

What were your favorite elements of Hell's Hollow to write?
I really enjoyed writing the growing relationship between Seraphina and Zach. I loved the build up from strangers to friends to something more. And because she isn't sure if he's real or a figment of her potential loss of sanity, there's an element of mystery that was fun to play with.

Also, the crazy parts! I loved writing her psychotic grandmother and also the scenes where Seraphina's own sanity begins to waver. I actually did quite a bit of research on different types of psychosis and based much of her aunt and grandmother's behavior on videos I watched of schizophrenic patients.

Were there parts of the story you didn't enjoy writing?
I always struggle a bit with writing the parts when everything is going wrong. I'm impatient to get to the places where things are working out. So I really have to push myself to hold out and let things be bad for a while. It makes the payoff of the happy parts so much richer.

Did you do much research for Hell's Hollow?
I did! I actually really enjoyed my research for this book. First, I spent time in the area of the Sierra Nevada foothills where the story takes place and even went to Big Trees State Park to get a feel for the giant trees that live in the Hollow. I spent quite a bit of time online researching psychosis and schizophrenia. I also did a lot of research on the history of the area — both of the Native American tribes that lived there and on the Gold Rush history. Other areas of research included the serpent-handling religion of West Virginia, alternative forms of healing, mythology about Hell, diseases caused by wild animals, baking and a few others I won't mention so as not to give anything away.

In Hell's Hollow, Seraphina has the ability to heal. Her grandmother hears people's thoughts. And her aunt sees the future. If you could have any super power, what would it be?

Ooh. That is a tough question! I have secretly always wanted Seraphina's power. But there are others that would be super cool too. I'd say flying, but I'd probably get motion sickness :)

Why does Seraphina, who has always obeyed her mom's rule about not using her special ability, decide to start trying?
Partly, it's because the tugs from the Hollow have begun to keep her awake at night and bother her all day. And partly, it's because of Zach. She wants to help him. There's also one more piece, which is that she's sixteen and her mom's rule feels wrong to her, and she's getting brave enough to make up her own mind.

The Tale of Hell's Hollow, which Sera tells Zach in the novel, was partly inspired by actual events that took place in that part of the state during the Gold Rush.

Believes chocolate and caramel can solve most problems.

Is terrified of rats... and mice... and anything in the rodent family.

Was a total book nerd in high school... and still is.

Tries hard to be brave.

Can be very determined (aka stubborn.)

Collects seashells -- but only when they ask her to.

Excerpt options: (They can shorten them if they'd like)

“You are,” he said. “And… you should stay away. This is a bad idea.” The worry in his face lit up in the moonlight.

“Don’t run,” I begged. My mind raced, wondering if somehow he knew about the pull to heal and how dangerous it could be for me to give in to it. “I won’t do anything, I promise.”

“What do you mean?” he asked, looking confused.

I caught myself. “What did you mean — when you said you were afraid for me?”

He looked away. “I’m not someone you should be around.”

“Yeah, you are,” I said softly, wondering if he was really other than what he seemed, and then wondering, too, if he might be a sign of a psychotic break, a figment of my imagination.

“I’m evil,” he said, “like prince of darkness kind of stuff. You should stay away. And… I shouldn’t be here.” He stood to go.

I shivered. “I don’t understand,” I said, moving closer to him even though it made my whole body hurt. “Why shouldn’t you be here? How could you be evil?” My mind started imagining all sorts of horrible things he might have done. I knew nothing about him. He could be the axe murderer for all I knew.

“I never should’ve talked to you,” he said.

“You’re not making any sense,” I said. “Won’t you come back and hang out again?”

“Just… forget you ever met me,” he replied. And then he loped off through the woods.