Nalena Maxwell has been branded ‘The Waste’ at her new school, due to her mom's obsessive paper hoarding. Nalena desperately wants something to change in her life, but when she receives a sign (and it's the wrong dang one) inviting her into a mysterious, ancient community, too much changes. What she knew of her family, what she thought of her life and what she believed about her future, is no longer applicable. Seventeen years worth of family skeletons come crashing into Nalena's life and it is the boy...the one that smiles at her like he wants to hear everything she'll ever say...that already knows her powerful secrets. But it is only Nalena that can choose between protecting the life that is already crumbling beneath her feet and the one that might sacrifice everything she could ever have.

5 OF 5 CORNERSTONES
I am so grateful to Misty for allowing me to be a part of this Blog Tour. I have to say that I love reading Indie books. There is such a rawness to it that draws you in and you can't put the book down. To me there is no censorship and I love that! Well enough blabbing on.

Nelena is a girl who is just trying to fit in at school. She is called names because her mother is a little quirky and collects papers and writes names and stuff all over them. Kids can be cruel and cruel they are to Nelena but she loves her mother and stands by her. Then one day Nelena meets a new boy Garrett and things start to change for them. Nelena finds out she is something different and her family has kept secrets from her that will change the course of her life.

In Cornerstone Misty brings out so many things that come together to make an epic story for me. I loved how Garrett helped Nelena out with the decision that could make or break her. I loved how the family secrets were kept for the safety of Nelena. Come along for the most magical ride where secrets are unraveled and revealed and when the dust settles who will be left standing. This book is a must read and when you start it make sure everything is done because you will ignore things to finish this book. You will want to see where it goes. I am looking forward to book two Keystone.

There’s a man-made storm coming, like a rip in the world, and it’s called the Cusp.

Struggling to fit into the destiny she’s accepted, Nalena Maxwell has been left with one objective: she must find her murdered grandfather’s Memory. Stolen and hidden away by her own father over seventeen years ago, the Memory could be the key to ending the Cusp and destroying the Ianua’s rival community, The Fury.

Driven by each individual’s selfish desires, The Fury has always lacked the loyalty and organization it needs to be an actual force of power.

Someone masterminded the Fury’s massive attack on the Ianua, slaughtering twelve of their thirteen community leaders, the Addos. Now there are rumors that the 13th Cura, to which Nali belongs, has gone to the Fury, manipulating the last Addo in order to control the other 12 Curas.

As the Cusp brings the Fury and their own communities against them, Nalena’s Cura must preserve the Ianua, but finding the key to the Cusp isn’t as simple as it seems.

5 OF 5 KEYSTONES
Keystone picks up right where Cornerstone left off. Nelena is struggling to fit in to her new life. The secrets were revealed and now more than ever she is confused by the person who betrayed her. The person took something very important and hid it away and refuses to give it up. Nelena struggles with her destiny and at times wonders if it was worth it.

Nelena is in a race with time to find her grandfathers memories that were stolen. She needs them to end this feud between the Cusp and the Fury. Will she be able to get the memory back and restore order or will she see a war for the first time. With Garrett by her side helping her every step of the way she will try and fight for what is right.

Keystone was an EXCELLENT sequel to Cornerstone and is filled with action and romance. What I loved the most about it was that Garrett and Nelena care for each other but it is not this oh my god I love you I need you type of love. It is a friendship that blossoms into more and the more the work together to find her lost grandfathers memory the more they fall in love with each other. I could go on for days about this book but I am trying so hard not to give spoilers because this is one series you have to read to get the full effect of what I am talking about. Way to go Misty and I look forward to more! 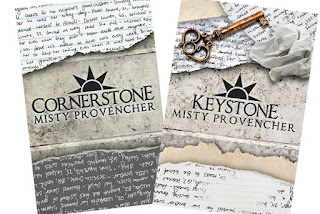 You already know this, but I adore these books! Every good review makes me squeal with happiness! So happy you could be part of this epic tour!

Thanks so much for such an EPIC review, Tee! I am so happy that you've enjoyed the books and so grateful that you are part of the tour. I love the blog and I especially love your energy, girlfriend! Anyone who doesn't know your blog definitely should!! Thanks again!