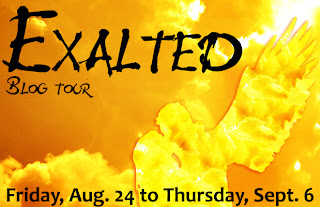 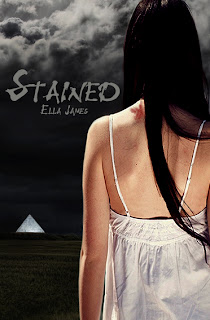 STAINED (YA paranormal romance):
After a fire destroys seventeen-year-old Julia's home and kills her foster parents, she chases the half-demon responsible across the country and back, determined to avenge her family and discover why a host of celestial baddies want her dead. With Julia is enigmatic hottie Cayne, who has his own score to settle with the half-demon, and who might be just as dangerous as the creature he and Julia hunt.
*Nominated best debut novel at UtopYAcon 2012.*

5 OF 5 ANGELS AND DEMONS

First I have to say that when I first saw the cover for this book I was interested. It is a simple cover but it really does pull the reader in right from the start.It's haunting but at the same time your wondering what the girl is staring at. The night is gloomy and dark and the clouds are raging and it leaves you wondering and asking the question what happened? Ella James has written an incredible story and added twists and turns that will leave the reader wanting more. I know when I started reading it I could not put it down and when I got to the end I said OMG what the heck I need book two like right now no not right now but like two seconds ago.

Julia is a haunted girl living her life in foster home after foster home. Trouble always seems to find her and she is not sure why that is. She knows shes different from others by why are these strange things happening to her and what can she do about it? The last straw for Julia is when someone burns down her current foster home and everyone in the house dies except her. After the fire she decides to run and hide until she can figure out what is going on. She finds an old building to hid in and while she is there she hears this fighting going on so when she goes to see what it is she sees two guys fighting to the death. One guy is injured and she heals him.

Once the stranger is healed we start to find out what Julia is and who the stranger is. The stranger wants to help Julia and they begin on this journey to find out the truth. But the stranger who we find out is Cayne really knows what and who Julia is. They will have to fight the bad guys and uncover lies, secrets and half truths in order to survive. Julia will also have to decide what to do about her feelings for this stranger. Love never really crossed her mind before but as the two get closer so does her feelings for him and she will have to decide what to do with them.

Julia will have to uncover who she is and what she is destined to do. Will she be able to discover the truth before it is to late? Will she open her heart to Cayne after losing everything she has ever loved? Will Cayne tell her the truth before it is to late? What will Sam do after the dust settles and truth is revealed? Come along for the best paranormal read I have read in the longest time! Ella you rock and I can't wait to read book two in your series. 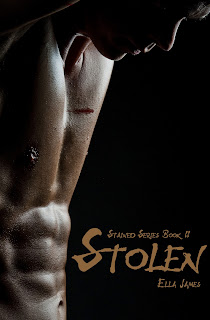 STOLEN (Stained Series Book Two):
With Cayne's fate in the hands of his enemies and Julia spirited away to the covert Stained compound, the two are separated by impenetrable walls and a gulf of unanswered questions. Soon Julia learns the truth about the Stained and the plans they have for her, the compound is attacked, and a new group is running from an unwanted destiny, searching the globe in pursuit of the knowledge that just might save them all. 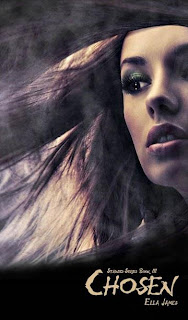 CHOSEN (Stained Series Book Three):
Julia has been chosen. While at the Stained compound, she was tapped as The One to win the war against the Nephilim and leashed with an illness that worsens each day she is away from The Three. Determined not to return to the frightening Chosen leaders and desperate to escape her fate, Julia and her friends journey to the Swiss Alps, home of a rogue Chosen clan. In this snowy haven, all hell breaks loose. Someone is traitor. Someone changes sides. Someone is dragged to Hades. A new romance blossoms. An old romance is damned. And The Three will stop at nothing to recover the weapon that will help them regain power.

EXALTED (Stained Series Book Four):
Ripped apart by the betrayals of two friends and ensnared by their respective celestial captors, Julia and Cayne are poised to fulfill their fatal role in The Three’s return to power. Their Chosen friends will move Hell and Earth to win their freedom, but how will they fight fate when more sinister forces take control? The net will come down. Someone will be sacrificed. A dear friend will die. And a mighty celestial battle will play out on Earth, with everything—and everyone—at stake.

Ella James is the author of Stained and Stolen, books one and two in the Stained Series; HERE, book one in a sci-fi romance trilogy; and Before You Go, a romance YA beach read that tells the first meeting of Logan and Margo, who will be featured in her upcoming adult release, Over The Moon. She has a YA paranormal romance release scheduled for every month of 2012, including Chosen (Stained Book Three) in June and the second HERE book in July.

Ella is inviting readers to help her write a shapeshifter romance, which is plotted via polls and questions on her blog and her Facebook page.

Ella lives in Birmingham, Alabama, with her wonderful husband, opinionated baby, and mopey dog. You can visit her blog at www.ellajamesbooks.blogspot.com, or friend her on Facebook atwww.facebook.com/ellajamesbooks. For a list of her award-winning YA romances, visit her Amazon page at http://www.amazon.com/s/ref=sr_tc_2_0..

GIVEAWAY TIME: STAINED BOOK MARK AND ONE E-COPY OF STOLEN ( U.S. ONLY) a Rafflecopter giveaway

I'm an angel fan. Demons are pretty interesting, but I go more for angels.
mom1248(at)att(dot)net

I have to go with the angels!

Well cayne is a demon so i have to go with them.

Depends on the book, but Demons usually have cooler powers & abilities.

Angels are cute, but Demons are yummy!!! LOL =)

I usually root for the angels...but sometimes a demon steals my heart.