I WANT TO GIVE A HUGE THANK YOU TO AToMR BLOG TOURS http://atomrbookblogtours.com/ FOR HOSTING THIS COVER REVEAL. AS YOU ALL KNOW I LOVE KATE EVANGELISTA'S WRITING AND SHE HAS DONE IT AGAIN WITH REAPING ME SOFTLY COMING OUT OCTOBER 30, 2012 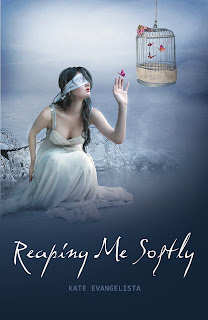 Ever since a near-death-experience on the operating table, seventeen-year-old Arianne Wilson can see dead people. Just as she’s learned to accept her new-found talents, she discovers that the boy she’s had a crush on since freshman year, Niko Clark, is a Reaper.

At last they have something in common, but that doesn’t mean life is getting any easier. All while facing merciless bullying from the most powerful girl in school, Arianne’s world is turned upside down after Niko accidentally reaps the soul of someone she loves. This sends them both into a spiral that threatens to end Arianne’s life. But will Niko break his own Reaper’s code to save her? And what would the consequences be if he did?

Link To Add Reaping Me Softly To Goodreads:
http://www.goodreads.com/book/show/15988916-reaping-me-softly

When Kate Evangelista was told she had a knack for writing stories, she did the next best thing: entered medical school. After realizing she wasn't going to be the next Doogie Howser, M.D., Kate wandered into the Literature department of her university and never looked back. Today, she is in possession of a piece of paper that says to the world she owns a Literature degree. To make matters worse, she took Master's courses in creative writing. In the end, she realized to be a writer, none of what she had mattered. What really mattered? Writing. Plain and simple, honest to God, sitting in front of her computer, writing.

Thank you so much for participating! *tackle hugs*