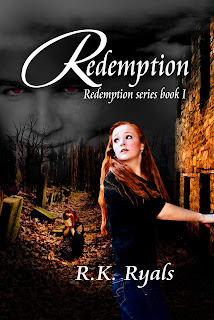 “The Time has come when He will come looking. She is ready. I have faith in her. She is her father’s daughter. She carries my blood. And I will never forgive myself for feeding her to the wolves.” Bezaliel from Redemption

Dayton Blainey is a foul-mouthed, grief stricken teenager forced to live with a religiously eccentric aunt she barely knows following the death of her parents. Often upstaged by her moral older sister, Amber, Dayton is often flung into the shadows. Little does she know that there is more to her than meets the eye.

When Dayton's Wiccan best friend, Monroe, sees a vision outside Dayton's bedroom window, a catalyst of events is set in motion that will change Dayton's life forever. She is faced with one major question: Who is she?

Dayton and her friends discover the truth behind this question is so much bigger than anyone ever imagined.

Redemption is the story of one young woman who must disentangle herself from a web of lies endangering her soul, and who discovers an attraction to a mysterious stranger that may just kill her.


A HUGE thank you to ATOMR Blog Tours for allowing my to be on this tour and allowing me to read and review this ARC. I have to say that anyone who knows me knows I love my angel books. I love the good the bad and the ugly and when the dust settles either the angels have won or the demons have won the battle.This is one of those unique stories that grabs you right from the beginning and keeps you plastered right to the very end.

In Redemption we meet Dayton Blainey. She is an angry teen reeling from the loss of her parents. She is sent to live with her weird aunt whom she does not really like. But living with her aunt is her only option so she rebels against every and anything her aunt and sister say.

Then one day her best friend Monroe who is Wiccan tells Dayton she had a vision about her and the vision was not a good one. With this vision playing out Dayton will learn she has been lied to and when the secrets are revealed she will have to face who she really is in this life. Anger is what fuels Dayton and when the truth comes out she will have to make choices and decisions that will not just effect her but others as well. What will Dayton do? Will she chose good or evil? Which boy will she trust? In trusting said boy will it make her or break her?

Come along for the best ride ever! This series is going to be epic! 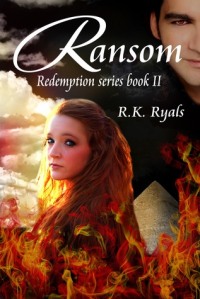 Vengeance is the path of the Damned. It is not a path taken lightly. For a Naphil, it could mean ransoming his soul.

Dayton Blainey is caught between two worlds: Heaven and Hell. Bound to a Demon she's beginning to care about, she is thrown into an adventure she may not survive.

But she will try.

Separated from her friends, she is forced to use powers she just discovered she had while surviving the wrath of a Demon queen.

She will be tested.

And in the search for a ring that may unbind her from Marcas Craig, Dayton will discover that the bond between an Angel and a Demon goes much deeper than blood.

An ARC copy of Ransom was given to me to review for a blog tour hosted by ATOMR.

I will say this again I am in LOVE with this series! I love me some heaven and hell wars. These are the best wars to be fought because you have to put your trust and faith in one or the other and I love how R.K. broke down the dynamics and created this world where you could totally see yourself living.

Ransom picks up right where Redemption ended.Dayton has discovered what she is. See being a Naphil which is a half human and half angel is hard for Dayton to swallow and to make matters worse she is bound to the demon Marcas. In order for her and Marcas to be unbound they must find a ring and Dayton will have to use her new found powers on The Demon Queen Lilith who is also Marcas's mother. Lord have mercy what a bunch of poo poo they are in.

Dayton is caught between two worlds and she has to learn how to use her powers fast because Lilith is coming for her and Marcas can only do so much against his mother. Dayton will be tried and tested and in the end the questions remain, will she be able to find the ring? Will she really be able to live without Marcas? How far will love take you when your heart has been shattered?

This is the second book in this series and I am in love and I highly recommend it to anyone who loves paranormal reads! 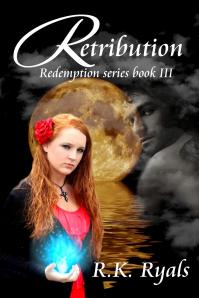 Love can overcome many odds. And while this emotion is worth many trials and tribulations, it can also lead to death.

Dayton Blainey is the only sane Naphil ever to walk the face of the Earth, and she's in love with a Demon she's been bound to by blood.

Marcas Craig is the Demon son of Lilith and Cain. He has a destiny he has turned his back on for Dayton.

Kidnapped by Marcas' insane twin brother, Damon, Dayton has become a pawn in Damon's fanatical attempt at securing his own redemption. The Seal is now in the hands of a mad Demon, there is a civil war brewing in Hell, and Dayton and Marcas' love could destroy Earth.

In the end, will love conquer all?

In this EPIC conclusion to The Redemption Series I had the honor and privilege to read an ARC copy of Retribution and HOLY BABY JESUS did I not want this series to end. I loved it so much and this is one of those series that re-read multiple times.

In Retribution it picks up right where Ransom left off. Dayton and Marcas are still bound but there is something new to them. They have discovered love. They are in love and want to be with each other and it goes against everything known to man for a demon and angel to be together. Dayton has proven that she loves Marcas and will do whatever it takes to be with him. She has defeated his mother who was The Demon Queen and Satan is upset and pays Dayton a little visit.

Marcas will do whatever it takes to be with Dayton so when his father and brother start to work against him he has to fight harder. When his brother Damon kidnaps Dayton he will fight like hell to get her back in his arms. Dayton and Marcas know that there is a war brewing and if they can't get it together soon it will come to fruition and all of mankind will be lost.

In this epic battle where good VS evil is in a show down you do not want to miss what happens. Can love conquer all? Can love survive Satan? Can love crack the evil that lurks in the dark? R.K. I need another series like this because I am so going to miss Dayton and Marcas and Damon and all the drama that comes with them. Thank you for a great series!

I am a Native Mississippian who started writing in elementary school. I was a reserved child who threw away almost everything I wrote. Later, when I was older, I discovered the crumpled pieces of my work in a box in my mother's hope chest. When I asked her why she saved the work, she replied,

It has been my motto ever since. My mother passed in 2005. She is missed.

I am the scatterbrained (no lie) mother of three, and I live in Mississippi with my husband and three divalicious daughters and a female shitszu (also a diva)named Tinkerbell. My poor husband!

Redemption is a three book series following young, brash Dayton Blainey. The first two books are now available on Amazon.com for kindle and in print.

The link to the Amazon ebook is: http://www.amazon.com/Redemption-Seri...

STALK HER ON HER WEBSITE FOR UP TO DATE BOOK NEWS
http://rkryals.blogspot.com/

FOLLOW ALONG THE TOUR FOR SOME AWESOME REVIEWS AND PRIZES
http://atomrbookblogtours.com/a Rafflecopter giveaway
Posted by Tee at 9/18/2012 06:02:00 AM

Thanks for sharing about the book :)

Great reviews. I had to push through the beginning of the first book because I couldn't figure out what was going on, but boy once I did, I could not put it down. I have fallen in love with this series. It is great!

Okay article. I just became aware of your blog and desired to say I have really enjoyed reading your opinions. Any way I’ll be subscribing in your feed and Lets hope you post again soon.

This series is one of my favorites this year. Definately 5 out of 5. Day & Marc are awesome!!! Great reviews :)

I haven't read this series yet but I would love to! Thanks for sharing your views with us and for the awesome giveaway:)

I have this series on my TBR list! Thanks so much for the giveaway!

Have not read this yet but sounds good!
thanks
evelynmoly@yahoo.com