Heirs of Prophecy by Michael A. Rothman Blog Tour Stop 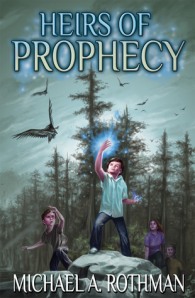 The Riverton family had been enjoying a simple summer vacation when, through a fluke of nature, they found themselves in a strange new land. The Riverton brothers quickly realize that in this world, they have gained unusual powers. Powers that their parents fear will attract the attention of Azazel himself - the merciless wizard who brutally controls this world. The two brothers soon learn that an ancient prophecy has finally been initiated by their arrival in Trimoria. As the heirs of this prophecy, they are destined to lead the armies of men, dwarves, elves, and even a misfit ogre against the prophesied demon horde. Only one thing stands in their way. The evil wizard who has learned of their presence, and has sent assassins to wipe them from existence.

First I would like to Thank AToMR Tours for allowing me to read and review this book for the blog tour. I have to say I am a HUGE fan of middle school books. Anything to get my sons attention gets my attention. We both read this together and he really enjoyed it as much as I did.

This story is about the Riverton Family who decides to take a summer vacation with the family. Only on their way there they are detoured to another place actually another land named Trimoria. Trimoria is beautiful and the brothers soon realize they have powers in this world they do not have at home. Their parents explain to them that it is their destiny to help the people of Trimoria.

The only thing is in Trimoria the boys will meet an evil wizarrd who wants their powers. The boys will have to fight him and his evil minions to save Trimoria. As the boys meet a town and fight him off they soon realize the wizards minions want to capture them to bring them back to the wizard so he can steal their powers. What will The Riverton Boys do? Will they be able to fight off the evil wizarrd? Will they ever get back home?

I loved this book because it was clean and family oriented and full of action. Right from the very first page there is action and it leads through out the book. This is a must read for anyone who wants to enjoy a fun filled adventure full of wizards, ogres, and more!

WANT TO READ HEIRS OF PROPHECY... IT IS FREE THIS WEEK ON AMAZON JUST CLICK THE LINK AND ENJOY 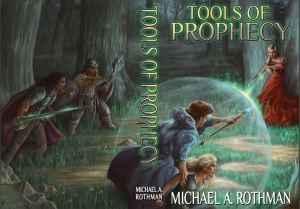 The TOOLS OF PROPHECY is the second volume in an epic saga which describes a prophecy that has placed the Riverton brothers in the lead roles of a struggle to save their world from being overrun by unspeakable horrors. This destiny requires that they face off with the demons that nearly destroyed their world over five centuries ago.

In the first book, the population of wizards had been practically eradicated by the former tyrant. The Rivertons are now charged with creating an Academy of Magic, recruiting qualified students, and furthering their own training with secrets that have long been held by the reclusive elves.

Despite their youth, a mysterious spirit has engaged them in an epic struggle to gain mastery of their newfound skills, help raise and train two armies, and stay alive long enough for their final showdown with destiny.

The only things that stand in their way are the assassins hired to destroy them and the Demon Lord’s minion who holds a personal grudge and intends to witness the young boys’ deaths.

I first want to say Thank You to AToMR Tours for hosting this blog tour and allowing me to be a part of it.After reading the first book I jumped right into the sequel which was completely and utterly as fascinating as the first one with a lot more action and adventure for The Riverton Brothers.

After defeating the evil Wizard Azazel the Riverton Brother's have to rebuild what was destroyed by the evilness of the wizard Azazel. Jared the older brother is building a school of magic where the brothers can train others in the magic that is needed to defeat the evil that still exists in Trimoria. The elves have been training the brothers and others and the brothers are getting stronger to fight in their next battle between the Demon Lord and his minions.

The Elves hold the secrets of the magic and they train the brothers with fierce love and respect. The brothers have removed one threat from their world and the elves plan on helping them destroy all the evil in their world. While the brothers are raising two armies to fight the Demon Lord is planing and plotting ways to destroy them. This is their final showdown with destiny. What will the Riverton Brothers do? Will they be able to defeat the evil Demon Lord and his Minions? Will the Riverton Brothers be strong enough in their magic?

Come along for the best ride of adventure and magic.I was totally hooked from book one and book two did not disappoint! Michael thank you for creating such a great world!

Ok, let’s face it. Anyone who knows me would be shocked to hear I am blogging. I am highly opinionated when it comes to technology and children’s education, but channel that energy into technical writing (co-written several technology-based books, written technical journal articles, and hold 100′s of issued patents).

Yet here I am, blogging and writing Epic Fantasy books? I know, I can barely believe it myself. ;-)

My first novel, HEIRS OF PROPHECY, was published earlier this year. The second novel, TOOLS OF PROPHECY, is being released on schedule July 1st (Kindle/Nook) and August 1st (Hardcover/Paperback).

I have also finished a prequel novel which focuses on some of the time immediately before the time of HEIRS OF PROPHECY. This book, will hopefully be released for the holiday season in the end of 2012. I am actually very proud of this novel, I think for those of you who were clamoring for more details on some of the denizens of Trimoria, you will find out a lot of things in the novel PRINCESS INTERRUPTED.

Also very proud of the cover that was just revealed. [Yes, its my design, but thanks to Paul Pederson for the actual artwork. He constantly amazes me...]

I am busily working on novel number four while the acquisition editor glares at me with a whip in her hand, waiting for the completed work…

This novel has a working title of LORDS OF PROPHECY and will be the concluding novel of the main Prophecies trilogy. Yes, I will be tying up any lose ends that were part of the main storyline. You won’t be left wondering about too much. However…

I’ll be frank and let you know that I have quite a bit more directions for the land of Trimoria and how our favorite characters can evolve. There are many things that were not part of the storyline, but let’s call it part of the background that begs for storylines unto themselves. Would you want to know more about the Ta’ah? What about those dark elves that make cameo appearances – the followers of Lilith? When you read the prequel, you will also learn that the Princess has some missions that could be explored further about how she holds the destiny of her people in her hands.

Yes – lots of directions, lots of stories, only one me. I did promise my wife though that I would only explore beyond the first series of 4 books if they proved to be commercially viable and that is up to you my friends, the readers.

If you explore the site, you will see that I have posted examples of the artwork/covers for the novels. You’ll also see my quips of “wisdom” occasionally and maybe even an occasional venting session.

All of my books will be available in both EBook and hardcover/paperback versions.

They will certainly be available from Amazon, Barnes & Noble, and also order-able (possibly stocked) at your local bookstores (if you have any left in your area).

The prequel novel (3rd novel), PRINCESS INTERRUPTED, is in the editing phase and once complete, will be sent out to all the industry review types. I hope to be able to post the reviews as they come in. If things go as planned, I hope the novel comes out by the end of the year.

One more thing – for those who wonder about all those recipes and why does this would-be fiction writer have them on his blog, the answer is simple.

I enjoy cooking. In fact am pretty good at it, and I’ve been harassed for recipes over the years, so I started to write stuff down. In hindsight, I find that it’s sometimes easier to look at my own written down recipes instead of trying to remember the items I need. I try hard to make the recipes accurate, easy to read, and geared toward the novice.

If you enjoy the recipes, I am happy to put more up, but otherwise I will probably do it on-demand or when the fancy strikes me.

Enjoy the site and keep reading and cooking.

Anyone who needs to contact me should be able to find me at any of the following locations:

Great review! Thanks for the opportunity to win!

I haven't heard for this series earlier. I really liked. I don't have children but I would love to read something to feel kid again.
Amazing covers!
Artemis