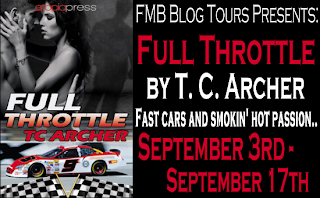 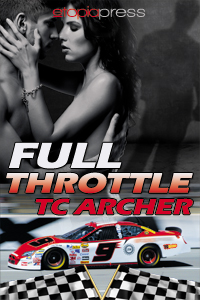 
Rising star NASCAR driver Rex Henderson is stunned to discover his new mechanic is smokin’ hot. Rex intends to own his own crew, but he must end the season number one if he’s to save his family and his dream. No female is getting in his way—especially his gorgeous new mechanic.

Nothing Jimmy knew about Rex Henderson the driver prepared her for Rex Henderson the man. But Jimmy has no time to consider her feelings as Rex wins race after race, despite strange mechanical problems with his car. Whether sabotage or her inexperience, she must stay a step ahead of trouble if she’s to ensure future wins—and safeguard her heart against the handsome, Alabama racecar driver.

“When do you expect the new mechanic?” he asked, eyes fixed on the photo. “I want to start testing the new Yates engine we bought for Daytona.”

Rex jerked his attention back to Duff. “You know I like to be around from day one. Emerson would have called.”

“I haven’t even met this guy and you’ve got him working on my car. Since when?”

“Since Wednesday. Look, there’s something—”

“Four days? I want to see what he’s done.” Rex tossed the photo onto Duff’s desk and turned.

“Rex—” Duff jumped to his feet and started around the desk. The phone rang and he cursed. “Rex,” he called as he grabbed the phone. “Winston. Yeah, I got the pictures. In fact—”

Rex took a left out the office door and strode past Emerson’s office, then past the office of the new accountant, Gary Blackeagle. The last office belonged to Brent Douglas, the guy who’d had Rex’s job for six years before he got caught with his pants down and a barely legal aged girl jammed between him and his locker.

Rex pushed open the door to the garage and stepped onto freshly waxed concrete. Despite last year’s sting, his heart raced as it always did at the start of the season when he first laid eyes on the immaculate eight thousand square-foot garage.

A dozen red, five-foot-tall toolboxes stood guard beside the uncluttered workbenches that lined the cinderblock walls. No. 14 sat in the first assembly area on the right, awaiting paint and window netting. Rex slid his gaze along the trunk and over the top of the car. The new Chevy was his ticket to owning a crew next season.

He started forward, then halted when a shapely figure in powder blue coveralls shifted into view. She bent over the engine like a real mechanic. What idiot had left his girlfriend to roam the garage alone? Rex dropped his gaze from the red ponytail to the feminine undercarriage on her fine frame and angled his head to get a better look. He couldn’t see her face, but judging by her body, her boyfriend had taste.

She pressed against the fender and in closer to the engine, straddling the front tire like Daisy Duke at her finest. Ouch! The fabric of the coveralls stretched across the lovely curves of her buttocks, complete with bikini brief panty lines. Rex shook off an unexpected need to hook a finger under those panties.

He crept to the car with panther-like stealth. She hadn’t emerged from the open hood when he leaned a hip against the fender beside her and drawled, “What fool left you alone in my garage, darlin’?” She stilled, and he ran his gaze the length of her five foot four body, then back to her taut rear end. He laughed softly. “You better come out before you get dirty.” Rex shifted his attention to the sparkplug wire she gripped. He straightened in shocked anger. “What the hell are you doing to my car?”

He seized her arm as she started to straighten and yanked her from under the hood. Her head struck the hood with a thunk. She gasped and Rex released her.

“Ouch!” Her hand flew to the top of her head and vigorously massaged the spot. “Why did you do that?”

“No one screws with my—”

She jerked her head around and Rex’s mouth went dry when his gaze met gorgeous brown eyes tinged with fury.

“That hurt!” She shoved back a lock of hair that had fallen loose from her ponytail and glared at him.

Those were the eyes a cowboy found only in a dream—and in midnight encounters in front of a wood-burning fire.

The sprinkling of pale freckles across her cheeks scrunched up when she wrinkled her nose. Her eyes narrowed. “Here, hot-shot.” She shoved the sparkplug wire into his chest. “You put the plug wires on. You know the firing order of your Chevy V-8?”

Rex raised a brow. “As a matter of fact—”

“Let me get you started,” she snapped as she gave her head another vigorous rub, “one, five, two, eight…”

“Look,” Rex retorted, “no one touches—” A hand clamped down on his shoulder and he whirled to find Duff standing behind him.

Rex stared at the buxom figure, then faced Duff. “Mechanic? What the hell were you thinking? Even in those coveralls she doesn’t look like a mechanic. She looks like a…like a…hell, like she belongs on Sex in the City.”

“Why didn’t you just paint her on the hood hugging the damn Cozy fabric softener rabbit?” Rex shot back. “That’d get Cozy to renew their sponsorship for the next ten years.” He pictured her, sheet thrown across breasts and hips, one leg sprawled over the rabbit’s belly. “We’ll get nothing done with her around,” he added tightly.

“I know who he is.” The lock of hair had fallen across her eye again. She jammed it behind an ear. “You ought to keep him in his cage.”

Duff chuckled. Rex gave him a thin-lipped scowl, then leaned against the car and crossed his arms over his chest. Jimmy flicked him a withering glare. His groin pulsed.

He ran his gaze down her body before meeting her fiery brown eyes again. “Only if you’ll be my cage-mate.”

She drew a sharp breath and a camera flash lit the garage behind Rex. He whirled in time to catch a second flash in the eyes. Spots raced across his vision, but he made out the figure straightening from a crouch behind a workbench near the side door. The man lifted the camera to his eye and Rex jammed his eyes shut an instant before the flash penetrated his eyelids.

Rex snapped open his eyes and started for the paparazzo. “I’m going to kick your ass!”

The man pivoted toward the side door.

Rex accelerated to a sprint with Duff close behind.

The photographer bolted through the door. “Sex in the City!” He laughed, adding before the door banged shut behind him, “Cage-mates.”

Rex slammed into the door a second later and flung it open as the photographer dove into the passenger seat of a beat up blue Subaru. Rex hit the asphalt at a sprint as the car leaped into gear, passenger door ajar. Rex picked up speed. The Subaru slowed at the end of the building and Rex thought he had him, but the car rounded the corner and accelerated toward the open gate at the entrance.

Dammit. During the off-season, no guard manned the front gate. Rex cursed again and picked up speed. The paparazzo had probably followed him onto the property. He should have closed the security gate after he entered.

The car leaped over the parking lot speed bump and hit the street, tires squealing as it hung a right and zoomed away. Rex slowed and stopped at the curb. The blue compact had reached the end of the block and took a hard left toward the freeway. Damn. He didn’t get the license number.

Duff halted next to him, breathing hard.

Rex glared at him. “What do you say now, Duff?”

Duff’s gaze locked on the direction the car had taken. “I say all of Dallas will know what Howard Motors has up its sleeve by tomorrow morning, the rest of the world by supper time.”

Inside the garage, an engine starter whined. Rex turned toward the garage and stared as the engine caught, followed by the roar of exhaust when Jimmy pumped the accelerator in short, quick stabs.

First off I would like to thank FMB Blog Tours for allowing me to be on this tour. I LOVE NASCAR racing and have watched it with my grandfather and uncles since I can remember. There is something about fast cars and fast men! Full Throttle will take you on such a ride between the romance that is there but both parties fighting it to the suspense part where someone is out to get Rex.

Rex is a NASCAR driver who is trying to start his life all over again.Between the nasty break up and the terrible season he has had all Rex wants to do is start all over again. He intends to own his own car and drive it but that takes money and winning status to do that. So he has get his head out of the clouds and focus long enough to snag the wins. Well the phrase better said than done comes to mind because Rex has to look for a new mechanic and what he gets is definitely not what he bargained for. In steps his new mechanic none other than Jimmy James. You are thinking okay what could be wrong with Jimmy James well she is a girl!

Gail Jimmy James is the best mechanic out there. She has brains and beauty and she wants to help Rex out. But being a girl and a NASCAR mechanic just don't add up. Right from the start the guys don't take her seriously but she is determined to be the best mechanic for Rex and when things start to happen to Rex and his race car she will stop at nothing to find out who is behind it and why.

Come along for the greatest NASCAR ride and find romance where you least expect it and find out who is behind Rex's sabotaging and why. I love me some NASCAR drivers!

T. C. Archer is comprised of award winning authors Evan Trevane and Shawn M. Casey. They live in the Northeast.

Evan puts his Ph.D. to good use by writing about alternate realities, and Shawn channels the mythology and philosophy she studied during her wasted youth into writing about exotic places and times.

It looks kinda cute! I wonder how that would really go over in NASCAR?