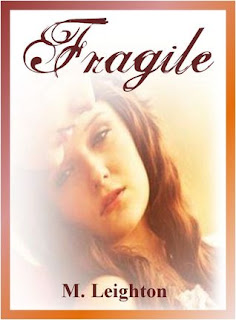 Her heart, as delicate as glass. His love, as strong as steel. Can either survive life and death?

Hardy Bradford is an eighteen year old football phenomenon who has the girl, the school, the town and the future in the palm of his hand. His life is all mapped out for him, right down to who he’ll marry and how he’ll become a professional football player. It doesn't seem to matter that Hardy would’ve chosen a much different life if it was up to him. But it's not. At least not until his Miracle comes along.

The first time Hardy laid eyes on Miracle St. James, he didn’t know who she was, but he knew she was something different and that he’d never get her out of his head. And he didn’t. Now, months later, Hardy’s world is turned upside down when Miracle shows up in his class, stealing his heart and forever changing the course of his life.

Miracle’s sick. Very sick. And Hardy might be losing the only thing in his life that has ever mattered. How much is too much to sacrifice for the one you love? For just a little more time? For just one more chance? Can Hardy be the hero Miracle needs? Or is it Hardy that needs saving?

I have to start by saying I am a HUGE fan of M. Leighton's. Her writing always draws me in and it is smooth and precise. She never ceases to amaze me with her writing. It draws you in right from the beginning and holds you there captive. So when I saw that AToMR was hosting a tour for Fragile I signed up to be a tour host. I have to say that this story blessed me in more ways than one.

Fragile is a story about love, sacrifice and finding oneself. Hardy Bradford has it all.He has the looks, the grades, the it girl and friends. But Brady longs for something else. His girlfriend Cheyenne is a shrew and shallow and he is tired of her. He just wants a break from her because she is just to much. She is grating on his nerves and he just does not want to be bothered by her anymore. Then he has his father barking down his back about Football. How he is going to make it to the Pro's all he has to do is concentrate and focus on it and it will be his.

At first Brady is all for it but one day before the beginning of his Senior year he is taking pictures for Football at a park when he sees two girls. One sounds older than the other but she is bald and sickly looking and for some reason Hardy can't look away from her. He is captured by her beauty and strength. Her smile totally unravels him and he is a goner lost in this complete stranger until his reality sets in and Cheyenne finds him and tells him it is time to go. Hardy is so lost in this girl that as he is leaving he is still looking for the girl with big green eyes and a bigger smile. But she has gone off with the other girl and he leaves with Cheyenne.

Hardy starts his Senior year of high school and he is excited to be playing football and he is also excited because he knows that at the end of football season he is going to break up with Cheyenne. He has had enough of her crap and just wants to settle down and prepare for college and what his decisions are going to be. He knows that his decision is going to upset some people namely his father but Hardy is tired of living a lie. He wants to do something that is going to make him happy.Then the best thing that could have happened to him does a few months into school who walks into his class> Yes you guessed it the mystery girl from the park with her big old green eyes and her easy smile but she has a full head of hair and rosy cheeks this time.Man Hardy is thrown a curve ball and it is all he can do to keep his cool in front of his girlfriend Cheyenne.

Miracle St. James has been sick. She is recovering nicely enough to go back to school. So she shows up at the school where Hardy is. She remembers him from the park and when she sees him she smiles that million dollar smile at him. Miracle has been through a lot so when Cheyenne starts acting like a tool towards her it does not effect her the way Cheyenne expects it to. Miracle knows something that Cheyenne does not know. Miracle has been sick and has had to fight for her life so she does not take everyday things for granted. She loves the sun on her face the different smells she smells and she loves just being around people. She does not say mean things to people and she does not do mean things to people.

Together Hardy will discover what it means to live and it will cause him to make choices for himself and no one else. Miracle will see what it is to truly open your heart and love someone. This story made me cry because love at first sight is a rarity but when it does happen it knocks you off your feet. I should know because it happened to me. Miracle and Hardy go through some stuff but together the conquer it all. This is a MUST READ for 2012! M. Leighton you have done it again!

I was born and raised in the United States, and I’ve lived in several of the fabulous fifty. Though I currently live in the deep South, I spent much of my childhood up North and hope to return there one day. A few other things about me: I believe that sometimes you have to look really, REALLY hard to find the good in people, but it's there. I believe that I'm shrinking (I swear five years ago I was two inches taller). I believe my husband is quite possibly one of the most amazing men in the entire world (I can't be sure because I haven't met all of them). I believe coffee and chocolate, when combined, could be the basis for world peace. I believe that Jesus rocks and communism doesn’t. I believe that white makes me look fat and black collects lint. I believe summer's too hot, winter's too cold and fall was made for football. I like dogs better than cats and the first movie in a trilogy is invariably the best. But most of all, I believe that love conquers all.

Follow along this tour for great reviews and awesome giveaways: http://atomrbookblogtours.com/2012/07/08/fragile-tour-by-m-leighton/
a Rafflecopter giveaway