That’s the question Lila Gray asks every time yet another bad guy tries to destroy the earth, and she learns she’s the only one who can stop it. Once again, something’s on the prowl, leaving hundreds of comatose, soulless victims in its wake.

Couldn’t the deadliest assassins of the Otherworld go after someone else instead of the brand new Queen of the Seelie? One who still hasn’t adapted to her new role.

Lila would ask Liam Kane, King of the Unseelie, for advice, but something’s off with him, too. He’s holding back. In some way. About some thing. In fact, he refuses to tell her what’s going on.

The truth holds Lila back from the greatness of her role—the people she was born to lead—the man who she desperately loves—and the solution to the latest war raging around her.

To find the answers, she’ll need to fight through her own darkness and embark on a journey through her psyche.

If she doesn’t succeed, the Shadowborn will claim not only her world, but her soul.

FUN BETWEEN THE CHARACTERS:
I’ve been summoned today to a fae city where, I understand, no human has set foot before. Lila Gray, the Seelie queen herself, has demanded my presence, and since I’m not her favorite person in the world after what I did to them in Shadowborn, I’m not sure what to expect.

The captain of her guard leads me to a house with black shutters and motions me inside. It’s alive, the house. It expands and contracts around me, and I’m a little freaked out at being inside the belly of some ancient shape-shifting beast.

Lounging on a white sofa in the center of the room, I find Lila Gray and the new Unseelie king, Liam Kane. Both are so dazzling I decide to keep my sun glasses on so I won’t go blind. While Liam grins at me, Lila frowns, twisting her wavy golden hair in her hands, and shoves an elbow into his side. He grunts, and his amusement fades from his lips, but not from those sparkling sapphire eyes.

“So,” I say, hoping that if Lila decides to pound me, Liam will stop her, “What can I do for you?”

“As you can imagine, Lila’s a little ripe about what you put us through last year,” Liam says, and his voice is dark and rumbling. I shiver, both from his fae energy, and the threat I sense is coming.

“Ripe? That’s the understatement of the effing century.” The evil eye Lila stabs him with fades when she’s ensnared by his gaze even worse than I am. Her cheeks flush before she returns her renewed scowl to me. It’s like staring down the point of a gleaming, pissed-off blade. “Why you’re here, is to tell us what the hell you were thinking. Sending Parthalan after me was bad enough, but the Shadowborn? That’s unforgivable.”

I swallow hard and shrug, uncertain which answer will let me leave in one piece. “Readers want excitement and suspense. What I was thinking, was that it made for a compelling read?” I raise my voice at the end to make it an innocent question.

When Lila opens her mouth—to stab me with words, no doubt—Liam shifts just enough so his leg grazes hers. It takes a moment for me to realize she’s stopped breathing and that he did it on purpose to silence her. Sneaky. “So the whole thing with Nix, with the crap at the Court, you put us through that for entertainment value?” he says, and now he looks ticked off, too.

Lila shifts away and draws in a breath, stabbing her thumb toward the king. “Yeah, what he said.”

“Now listen here,” I say, deciding a little guilt and logic might help, “If I didn’t write this stuff you wouldn’t even exist. You sure as hell wouldn’t know one another. It turned out okay in the end. Sort of. Were the harsh times not worth the end result?”

Two sets of fae eyes stare back at me. Liam’s grin returns, though he hides it with his hand. Lila opens her mouth, closes it again. I can see her working through it. “Yeah, I suppose it was all worth it. But you said it’s not over. The last chapter of our story had better be filled with bunny rabbits and effing rainbows, or you and I are going to come to blows.”

Liam leans down to her ear and whispers something that makes her gasp and squirm until she elbows him again. She tries, unsuccessfully, to contain her smile, and even though she was beautiful before, she’s stunning now. The heat in his gaze might just melt my bones, and it isn’t even pointed at me.

I almost ask what he said to her, but since I seemed to have earned myself a stay of execution, I make a quick exit. The last thing I hear before shutting the door is the sound of clothes ripping.

A twinge of fear singes my stomach as I consider what I have planned for them in Rise of the Magi. I think I’ll have to leave the country. J 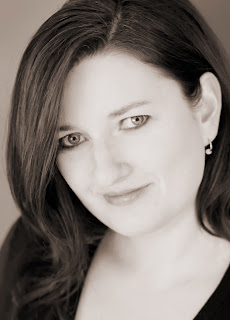 Jocelyn Adams grew up on a cattle farm in Lakefield and has remained a resident of Southern Ontario her entire life, most recently in Muskoka. She has worked as a computer geek, a stable hand, a secretary, and spent most of her childhood buried up to the waist in an old car or tractor engine with her mechanically inclined dad. But mostly, she's a dreamer with a vivid imagination and a love for fantasy (and a closet romantic — shhh!). When she isn't shooting her compound bow in competition or writing, she hangs out with her husband and young daughter at their little house in the woods.