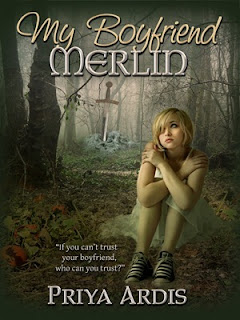 He was a little older than he was letting on. By a few eons...
In this modern Arthurian, 17 year-old Boston high schooler Arriane, aka Ryan, DuLac just found out the guy she's been crushing on, hot biker Matt, is a little older than he was letting on. In fact, he is really Merlin—the Merlin, King Arthur's Merlin, the greatest wizard who ever lived. Frozen in a cave for over fifteen hundred years, he's woken for a purpose. But Ryan's not impressed. Tired of being a relationship loser, she'd rather kick his legendary behind.

Sure, the world has been crazy ever since the sword and the stone fell out of the sky like a meteor. But despite gruesome gargoyles, a deadly new world of magic, and the guy driving her crazy, Ryan knows that family is everything. Will Merlin sacrifice hers to save the world? Will she be able to stop him? 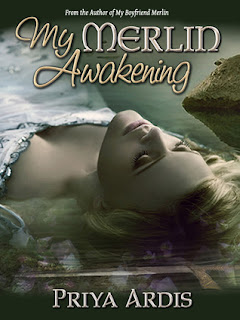 If you haven't broken the rules, have you really lived?

Excalibur has been pulled from the stone, but what does it mean? Arriane (aka Ryan) DuLac's got bigger problems—as student president, she's got to put on the Prom. While the Wizard Council debates their next move, she leaves the craziness behind and heads home. But she can’t hide forever. Sooner than she’d like Merlin (aka Matt) has her chasing mermaids on the trail of the Fisher King in Greece. The wounded King, defeated by Merlin’s brother, Vane, in the past holds the key to save the future.

On the journey, Ryan begins to realize the friends she thought she knew, she may not know at all. At a time of shifting alliances, she must decide whose side she’s on—the brother who struggles to do right or the brother who dares to break the rules? And Ryan must decide who she is—a regular or a champion?

If you sacrifice everything, what’s left to hold on to?

The end of the world. The day of reckoning. The final battle.

In the last chapter of the My Merlin Series, it is a time of great strife for Arriane (aka Ryan) and Merlin (aka Matt) as they struggle to stem the flood of destruction unleashed upon the world. Their only hope rests in the one object that can restore their greatest ally: the Healing Cup.

With every scrap of life hanging in the balance, Ryan must convince both friends and enemies that the key to survival rests in the plans of a sword-toting girl of only eighteen. She must reconcile a fifteen-hundred-year rivalry between two brothers, and be ruthless enough to break a heart—and a life—in the process. And at some point, she really needs to get herself to Prom.

EXCERPT FROM MY MERLIN SERIES

A lacrosse ball whacked me on the head. I turned to glare at the perpetrator.

“Wake up, DuLac!” Vane yelled from the sidelines.

I gnashed my teeth and rubbed my head. The score was ten to two—not in our favor. Possibly the reason our new coach may have been so pissed.

Vane, or Dr. Vivane Northe, had joined the staff of Acton-Concord High School during the winter break. He’d taken over the position left by Ms. Bedevere, my European History teacher, who’d not only gotten married during Christmas vacation, but was now expecting a kid. Her new husband was our Physics teacher, a short energetic man, and apparently, not shooting blanks. Really, it was possible to know too much about your teachers.

I glared at Vane. He wore navy blue sweatpants, a wool cap, and a matching blue hoodie. I had on thin windbreaker pants, no jacket, and no warm cap. The cap was my fault. It was sitting in my gym bag inside the heated locker room. Of course, Vane refused to let me go back inside to retrieve it. All in all, I preferred to be curled up in bed with a book, rather than standing in the middle of a field on a bone-chilling winter day in Concord, Massachusetts, clutching an icy lacrosse stick.

Vane smirked back at me as if he knew exactly what I was thinking and had zero sympathy. “Stop daydreaming and pick up the pace, Ryan.”

I wanted to take the ball and hit him in the face, but I didn’t. I wasn’t the sort… Unfortunately.

I love books of all kinds—but especially the gooey ones that make your nose leak and let your latte go cold. My writing comes from a childhood of playing too much She-Ra and watching too much Spock and reading way too much fairy-tales, fantasies, detective stories, romances... the list goes on. (When Belle gasped at the library the Beast gave her, so did I! Color me with library envy.) I started penning my first book at sixteen, writing in long notebooks on train rides in India. A hopeless romantic, I'm also a longtime member of RWA (Romance Writer's of America).

If you haven't broken the rules, have you really lived? My Merlin Awakening, Book 2, is coming in Summer 2012! My YA Arthurian, My Boyfriend Merlin, is available now. Catch up with me at my blog http://merlinblogs.priyaardis.com/

Ever My Merlin, Book 3, Chapter 6 - Garden of Eden

Boys, I cursed.The train took us closer to the mountains in the middle of the island and up into the hills and higher elevation. Outside, the dense foliage resembled a jungle. We passed through a short tunnel, hewn out of rock, and the countryside opened to the sky. Tidy rows of tea bushes layered hillside terraces of a large tea estate. At its center, I spotted a stately white plantation.Matt shut the guidebook and stared out the window in silence.“No,” I burst out. “I refuse to believe that’s your whole reaction. There’s more to it. I know it. So do you. So what are you not wanting to say? What are you holding back this time, Merlin?”He said softly, “I already trusted you once, Ryan.”And you betrayed me. The unspoken words reverberated in my head, cutting deep into my heart. I took a breath, and let it out. “I can’t change what I did.”“No, you can’t.”He was making me crazy. I sighed. “Can you for one minute stop feeling sorry for yourself?”“I might if you’d bother to help me fix what you’ve broken, instead of wasting time admiring the countryside.”I glared at him. “Why do you think I’m here?”“Why are you? I might deal in half-truths, but at least, I haven’t been lying to myself.”“What does that mean?”Matt put the guidebook in my lap. “It means you can’t have it both ways, Ryan. You can’t believe in Vane and me at the same time. Only one of us is right.”I didn’t think he was talking about belief.

I tried to use your rafflecopter, but kept getting an error reading.

I entered. Thanks for the giveaway.

Thanks for hosting My Merlin today!