Going Under (Going Under, #1) by Georgia Cates Blog Tour Stop 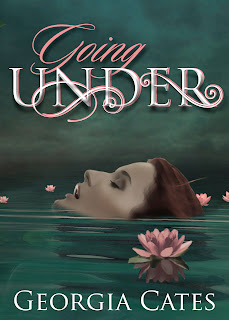 Jessie Boone is a self proclaimed bad boy and doesn’t march to the beat of anyone’s drum, but his own. Growing up in less than desirable circumstances has made him no stranger to the hard knock life and his determination to leave it behind is fierce. When he finds himself transferred to East Franklin High School, he sees his opportunity to use his athletic ability to snag a college football scholarship, but Forbes Henderson, the player Jessie means to replace isn’t giving up his spot willingly. In fact, Forbes is willing to go to extreme measures to retain his place as first string quarterback. When Forbes’ malicious plan to injure his replacement fails, Jessie is furious and determined to show him he messed with the wrong person; not only is he going to take the position of first string quarterback, he’s going to take his girl, too.

Claire Deveraux is perfection at it’s best. She is beautiful, intelligent and unaware she just became Jessie Boone’s conquest as revenge against her boyfriend, Forbes Henderson. Like her flawless performance as the perfect daughter and student, Claire’s production of being the perfect girlfriend has everyone fooled, except Jessie Boone, and she fears this tattooed bad boy will see her secret desire to explore his crude threats and promises to rock her perfect world. If she decides to give in to one uninhibited moment with Jessie, will she learn too late that it was all an act of vengeance or will Jessie learn the taste of first love is sweeter than that of revenge?

5 OF 5 GOING UNDER JESSIE BOONE

Going Under is one of the rare reads that leaves you breathless and rooting for the under dog all the way! Thank you to AToMR Blog Tours for allowing me to read this ARC and be a part of the tour. Georgia is a FANTASTIC writer who creates these FANTASTIC worlds that draw you in and I feel like I am right there with the characters. I can feel their pain, loss and sorrow and their happiness, love and joy. In Going Under we get to meet a cast of characters that totally blew me away.

Jessie Boone is dealt a raw hand of cards. He lives in a rough side of town and he is the epitome of BAD BOY! His attitude and behavior screams bad boy but underneath all that exterior might be something else. Jessie has messed up and is given a second chance and he is going to take it. Jessie starts at a new school and plays football to get a scholarship. Only when he gets to his new school he has to contend with the arrogant Forbes Henderson.

Forbes has it all and I mean all. Spoiled rich brat who has the grades, looks and the girl and most importantly has the spot on the football team that Jessie has his eyes on. Forbes sets out to destroy Jessie but as in all plans things don't go as he planed and now Jessie is out for blood. He will take his revenge in taking Forbes girl Claire. Forbes will fight like hell but underneath Claire's well held facade lies something only Jessie can quench.

Claire has it all grades, looks, friends and the greatest boyfriend Forbes. She is envied by all the girls but Claire holds a secret and one she will not reveal until Jessie comes along. Claire's careful wall is about to come crumbling down when Jessie targets her. But is this going to be a game between the two or is there going to be something real and forbidden because we all know bad boys from the wrong side of town never get to be with the rich spoiled girl.

What will Jessie do to Claire? What will Forbes lose because of his arrogant rich attitude? What will Claire reveal about herself? Come along for the ride of a lifetime. There were so many emotions swirling in this book that it took me from happy to sad to angry to hopeful for a couple that might not be able to be. Georgia thanks for the tears because they were well worth it!

I am a wife, mother of two daughters and a labor and delivery nurse. I have recently added Paranormal Romance Writer to my list of things to keep be busy, but I am ecstatic to release my debut novel, Blood of Anteros, the first book inThe Vampire Agápe Series.

US Only: (2) Signed print copies of GOING UNDER (2) GOING UNDER T-Shirts a Rafflecopter giveaway