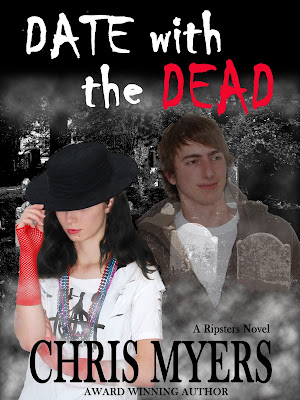 Sixteen-year-old Jolie Livingston’s closest and only friend Drew is this really hot dead guy, and it bites that the self-absorbed princesses at school cannot even see him. That’s right she can communicate with the dead. It’s the living she has trouble with. She and her mom inherited this awesome crib in Plymouth, MA. It’s quite a step-up from the homeless shelter in New Orleans, but there’s a catch. They can’t afford the past due mortgage, so Jolie’s working on that.

Jolie starts a ghost hunting business called Ripsters. Somehow she’s managed to recruit Brittany, a glamour SAP smothered in pink, and a techie allergic to ghosts. Brit actually thinks he resembles the R&B singer Chris Brown. All that pink has clouded her vision. They both have special talents Jolie’s hoping will be useful to their venture. Right now, they’re working for a family in need of major therapy due to a dead guy with a hole in his head.

Hayden, a really cute guy, who lost his Wiccan mother, wants to join them, but Jolie’s grandmother warned her about his kind. Not that it matters. Jolie seriously doubts a living guy as hot as Hayden will be interested in a girl cozy with the dead.

Date With The Dead is a very funny, unique read. I really loved the descriptions of Plymouth of Plymouth seeing as I live 45 minutes from there. I really enjoyed how Chris took the whole ghost hunter thing to another level. I have read a lot of ghost books but this one by far was the most pleasurable.

Jolie and her mother move into a house that in Plymouth. They both move there to start over because quite frankly they were not making it in New Orleans. Jolie has a gorgeous ghost best friend that no one can see or hear but her. As she starts her new school she realizes just how weird she can be but soon makes friends and starts her own ghost hunting business. She starts the business with two friends she has made at school and one girl is a SAP you know the kind stuck up and snotty for the sake of appearances but these guys make it work and soon they are on their first case.

Jolie and the gang have to figure out whether or not their first case is a murder or accident. John died but his ghost won't rest and so Jolie and the gang have to pick through the clues and see what happened to him. If this is not stressful enough Jolie is starting to have a crush on a guy named Hayden who wants to join them in hunting out ghosts. What is a girl to do? What will she find out about John? Will she and Hayden have anything more than friendship?

Follow The Tour By Clicking On The Link:
http://atomrbookblogtours.com/2012/10/18/tour-date-with-the-dead-by-chris-myers/

This does sound like a fun read...and a ghost story to boot! Adding this to my pile. Thanks for the insight!

Thank you so much. Like most writers, my stack of books sits next to my bed or on my tablet. Thanks again.

Author of Date with the Dead

Sounds fantastic! Thanks so much for sharing and congrats to Chris on the new release!