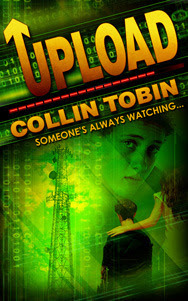 Jay Brooks’s life is in chaos. His mother’s sudden death has unhinged his father, making Jay a stranger in his own home. He seeks solace by spending his spare time with his best friend, Bennie, but matters are further complicated by his crush on Chloe, Bennie’s older sister.

A wheelchair-bound hacker, Bennie Welch practically lives in his basement computer lab. Longing to make genuine connections to the outside world, he secretly films people’s precious memories for later sale and surfs the crowds at rave parties, despite the danger to his frail body.

One night, Jay’s hobby of Wi-Fi hotspot hunting turns serious when he unwittingly blunders into the scene of a crime and downloads a mysterious transmission. When Jay brings Bennie the contents of the transfer, Bennie embraces the opportunity to use his skills to investigate.

As Jay and Bennie dig deeper into the world of electronic secrets, they find that the simple video has far-reaching implications that not only threaten their lives, but society as they know it. Tracing the mysterious coalition responsible leads them on an inexorable journey that will change them forever.

First I would like to say that Upload is a great story about friendship, loss, and finding ones self. I loved how Collin created this world where one curious move lead to a series of things happening to best friends. Curiosity killed the cat is the saying and sometimes it is true. In this case it sends best friends on a journey like no other.

Jay has lost his mother and in the chaos of losing his mother he has lost his father emotionally. His father has decided to shut down after the death of his wife because he just can't handle it. So Jay spends his days surfing the web looking for things to do and spending time with his best friend Bennie. Bennie is wheel chaired bound and stays at home surfing the web looking for a chance to catch people doing things so he can sell it on the web. Bennie loves to party even though he is in his wheel chair it does not stop him from going to raves.

Then one day Jay stumbles upon something on the internet and he brings it to Bennie. Once they unravel the video they realize they have uncovered a murder. Together Bennie and Jay decide they are going to try and solve this murder themselves instead of giving it over to the police. As they delve deeper into the murder they find things are not always as they seem and they may have bitten off more than they can chew.

Will they find the murderer before he finds them? Will they alert the police? Will they learn their lesson and mind their own business? This is a must read adventure story that has twists and turns and leaves you breathless!

A Little something from Collin Tobin

… the crunching, munching sound of hard drives reading and writing data, like the sound of time itself being nibbled away at its edges.

I can still hear it now. And inflicting upon one of my characters the same condition hasn’t relieved me of it either. Quite the opposite: my problem might be magnified now. That damned sound. I heard it last night, in fact. I had forgotten to turn on the fan before bed. With the room relatively silent, devoid of other significant noise, there it was: crunch-crunch-crunch. The sound of computer hard drives, ceaselessly working, the miniature violent echoes of data writing and overwriting itself.

At some level, I realize this aural fixation (not oral) is entirely in my imagination. I must be somehow transcoding normal white noise into hard drive chatter. But for years now, I can’t seem to stop it, even as I recognize it for what it is. In the darkness of my bedroom, my ear reacts and chases after the source of the sound, like one chases after an eye floater. But of course, the source of the sound eludes me, because it doesn’t really exist. Somehow, my years of exposure to overworked computers have worn a groove in my auditory cortex, like a well traversed, beaten path.

I think I can even pinpoint the night that caused it, over a decade ago. I was a new hire into a web server software company. One week after I joined, deep layoffs had begun. Scared to death and with a new baby, I tried my absolute hardest to make a good impression. One night, I was unable to properly configure a piece of software for test that I was never properly trained on.

Of course, I could have left the office at the normal time, arrived home for dinner, a warm hug, and maybe some toes up time before the television with my wife. But if I did leave, I would risk putting behind me yet another day of unexceptional performance. I can do this, I thought. I can work my way through. Something inside of me decided that I needed to do this. So I jogged to the office kitchen, armed myself with a couple of Cokes, sat back down at my desk. I snapped on my speakers and played an infinite loop of Kruder and Dorfmeister music. This will be a cinch. I’ll be home by seven.

I continued to work, fruitlessly, for the next six hours. In retrospect, I was making a critical mistake that night that one can also make while writing. With each new deployment attempt, I was changing too many variables at once. A huge no-no in the software testing world. If you’re going to proceed methodically, you have to be regimented, rigorous. You have to commit to changing only one variable at a time, so the resulting success or failure can be pinned upon that one change.

There were no windows in my office. I could see no stars, and thankfully, no silently disapproving moon floating over my shoulder, but a quick glance at my computer clock and I knew I was past the point of no return. It was midnight. The overexposure to Kruder and Dorfmeister had somehow begun to make me queasy (certain tracks still do to this day). Just as the smell of Long Island Iced Teas now makes me queasy… but that’s another blog post. I snapped off my speakers. I needed to concentrate. The fate of the software release and the well-being of my family were upon my shoulders. What if I got fired? Would we all have to move in with my Dad? Would my wife have to return to work to support us? Was the 7-11 down the street hiring?

Like a nighttime fog, the greasy cool sensation of eternal failure enveloped me, to the backbeat of those damned crunching hard drives. I was working on an underpowered PC, and the sound of the web application server deploying the application file was excessively loud in my 6 X 6 office. Crunch-crunch-crunch-crunch. My anger grew. The hard drive crunching transformed in my mind into the sound of little digital gremlins, nervously chewing their nails, debating whether or not they should tell me that I had once again FAILED. Abysmally.

I tried refueling with two more Cokes and a slice of cold pizza from the common fridge. But I was done. Kaput. I returned to my office and curled up onto the corporate carpet (rub a Brillo pad to your cheek if you’re curious). In the last hours before sunrise, each time I’d stir, I’d try to deploy the application once more, and return to the floor.

I’m convinced it was then that it happened, when my defenses were at their lowest. During those brief periods of fitful sleep, the sound of the crunching hard drives bored its way into my ear, making its greatest impression, insisting it be heard forever, like an unbidden muse.

Collin Tobin lives in Massachusetts with his wife and two daughters. He holds a bachelor’s in English and master’s in Education. He has worked in the software industry for the past twelve years.

He was the lucky recipient of the Mississippi Literary Festival’s 1st place in poetry and has also published poems in “character i” and “The Drum”.

When he’s not writing, he enjoys re-reading Nabokov’s fiction in chronological order, eating very hot salsa, and dreaming up inventions with neither the capital nor the initiative to see them through.

His greatest accomplishment is his wonderful family.

His greatest fear is losing interest.

Thanks so much, Tee, for your kind review! I'm so glad you enjoyed Upload. If any of your readers would like to contact me, I'm @ http://www.facebook.com/collintobinwriter.

Wow. Great review. Glad to hear you enjoyed it. I've not seen this one before, but I'm thinking I'm going to see more of it from the sounds. :) Thank you.