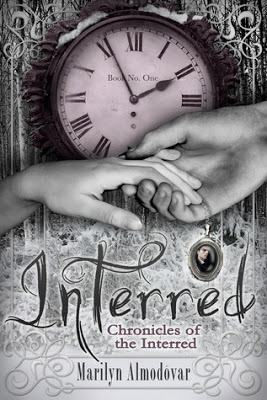 Interred (Chronicles of the Interred #1)
by Marilyn Almodóvar
Release Date: 01/22/13

Summary from Goodreads:
Time has never been an issue for Baxter Jacobs, but then she never knew she had the ability to Bend it.

As her sixteenth birthday approaches, Baxter inherits a pendant that will change her life. Connected to the pendant is a dark and mysterious young man named Declan Ashdown. Trapped in a Time loop for the past 122 years, Declan needs Baxter’s help to escape. The only problem is, she has no idea how to do it.

To acquire the power she needs to free him, she’ll become one of the Interred, those whose Magical abilities emerge as they come of age. When she does, she’ll discover that Declan isn’t the only one interested in the fact that she’s a Time Bender.

As the Interment arrives, Baxter knows this will be no Sweet Sixteen. A vengeful relative and ruthless Council are determined to control her. Declan’s powerful and charming descendant, Jack Ashdown, claims he can save her. She’ll soon have to decide who she can trust, and how to master her new abilities before Time runs out.

Interred is a wonderful story and was a refreshing thing to read. I have to say that I have been reading a lot of paranormal stories but as everyone who knows me knows I love time travel stories and stories that have to do with time. Interred grabs you right from the beginning and keeps you sated till the end wanting more and needing more.

Interred is a story about a girl named Baxter who is turning 16 and when she does something magical will happen to her. But to her horror her mother never told her this so when the counsel comes in and talks to her she is shocked by what she learns. As she recovers she is then thrust into a world wind of chaos because two boys brothers each one wants something from her and she is not so sure she can deliver.

First Baxter has find out what it is that Jack and Declan want from her and then decide if she will do it. Jack is the sexy flirt and Declan is the bad boy broader but when it comes to helping Baxter is a natural helper and she will do whatever it takes to help them out. One will win her heart and the other will break it but in the end will it be worth it?

Can bending time really come with so much drama? What will Baxter do? What will Jack and Declan do? This is a must read story for all who love paranormal stories with a touch or romance! 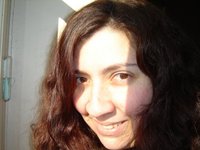 About the Author:
Marilyn Almodóvar is the author of a series of YA paranormal novels. Born in Ft. Huachuca, Arizona, Lyn is a lover of words whose reading tastes range from Victorian novels to the books of Stephen King. Her favorite past-times have always been reading and writing, two activities that let her escape to other worlds.

It was this love that propelled her to choose Theater and French as majors in University, with a minor in English Victorian Literature. Lyn lived for almost a decade in England followed by three years in France before returning home to the States. A self-confessed citizen of the world, she is fluent in English, French and Spanish, with basic knowledge of the Italian language.
Lyn could happily exist breathing the clean air of Narnia, trapped in a cupboard under the stairs with Harry, fighting alongside Captain Jack Sparrow, doing an internship in Torchwood, or traveling around time and space with the Doctor…as long as she can have Mr. Spock, Captain Kirk and Captain Mal as companions.

Lyn currently lives in Central Florida with her French husband, English-born eldest son, and French-born youngest son. Her debut YA Novel, Interred, will be published by Iambe books on 01/22/2013.

Terrific review, Tee! Thanks so much for sharing!

Thank you so much for reviewing INTERRED! Glad you liked it!