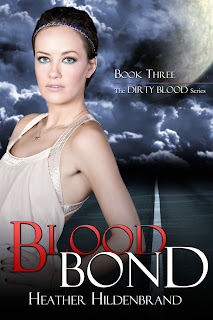 Then again, without hybrids, I wouldn’t have Wesley St. John.

MY REVIEW
5 OF 5 WESLEY ST. JOHN
F-A-N-F-R-E-A-K-I-N-G-T-A-S-T-I-C!!!!!!!!!!!!!!!!!!!!
First I just want to say that this series was the very first werewolf book I had ever read. I was hooked right from the beginning and have stalked bawhahaha slashed friend-ed Heather and have read everything she has published. So when I found out she was doing a blog tour for Blood Bond I had to be on this tour.

In Cold Blood Tara was sent to the academy where she would be safe from her crazy cousin Miles. While there she meets Alex and few others that welcome her to the school. The only thing is that she is away from Wes and that totally is a bummer for her but when she needed him the most he showed up and fought for his girl. When Cold Blood ended I was like HOLY ALIEN BABIES!!!!!!!! What just happened but Heather being the brilliant writer she is stepped up the game with Blood Bond and I could not put it down when I was finally able to read it.

In Blood Bond Wes totally steps up to be there for Tara. In Cold Blood she became a wolf and kicked some serious butt. So in Blood Bond Tara has Wes there to help her embrace her wolf side. But what would be a great story without some drama. One of my favorite characters from Cold Blood turns out to be a traitor and Wes and Tara have to work through some things that threw them off.

The Cause is still struggling to keep it together. They have some traitors and lots of secrets but when the dust settles and the road is in front of them will they be able to stand strong? It is a fight to the end but what will Tara do? Will she embrace the wolf side? Will she say she's had enough? Will they be able to band the Cause together and fight the evil that threatens their livlyhood? Come along for the greatest adventure with lot's of twists and turns and see what will happen to Tara and Wes and the gang. I promise you will not be disappointed!

Heather Hildenbrand was born and raised in a small town in northern Virginia where she was homeschooled through high school. She now lives in coastal VA, a few miles from the Atlantic Ocean, with her husband and two adorable children. She works from home, part time, as a property manager and when she's not furiously pounding at the keyboard, or staring off into space whilst plotting a new story, she's helping her husband with DIY projects in their home (he woodworks - she paints) or she's lying on the beach, soaking in those delicious, pre-cancerous rays.

Heather loves Mexican food, hates socks with sandals, and if her house was on fire, the one thing she'd grab is her DVR player.

You can find out more about her and her books at www.heatherhildenbrand.blogspot.com


Heather is a co-founder of Accendo Press, a publishing group she operates with fellow authors: Angeline Kace and Jennifer Sommersby. Accendo (a-CH-endo), A Latin word, means “to kindle, illuminate, inflame, or set fire.” This is something Accendo strives to do inside a reader’s imagination with every title released. For a complete list of titles and author bios, visit www.accendopress.com.

Today on A Diary of A Book Addict we have one of my all-time FAVORITE authors, Heather Hildenbrand. She is the author of many books but my all-time favorite The Dirty Blood Series. This was the very first series I read about wolves and I was hooked from the very beginning! Heather has created a world where there are secrets, lies, and danger lurking at every corner.

Today she is here to share a little about her third book Blood Bond. For those of you who don’t know about the Dirty Blood series you are seriously missing out and you should check it out on Heather’s website by clicking on the link http://www.heatherhildenbrand.blogspot.com/

So Heather I want to personally thank you for stopping by and answering some questions for the fans. You have such a huge following. Everyone loves Wes, and in Cold Blood, Wes has some competition when Tara goes to the private school where she will be safe. So here are some really hard questions and fun questions for you, Heather.

What inspired you to write The Dirty Blood Series?

Hmm, well I knew I wanted to write werewolves (because I love them. Yes, because of Twilight.) and I knew it had to be different. Something where even the rules and world itself felt new and fresh to the reader because werewolves have definitely been done. A lot. I wrote the first draft during NaNoWriMo (National Novel Writing Month) in November 2010. That’s 60,000 words in 30 days people! AHH! Yeah, it scared the bejeesies out of me but I did it and it taught me A LOT about writing and myself and discipline. And—best part—out of it came this story. Yay!

How many books do you plan on doing in this series?
( I don’t want this series to end, like ever) Me either! I feel SO connected to these characters. I know them really well. Sometimes, better than I know my real life friends. Haha! But I know that eventually it will have to end. I’m pretty sure there will be two more books. Unless something huge comes up in my plotting. But for what I’ve got planned, there will be only two more. *sad face*

In Cold Blood we met Alex. He is a strong character and is a huge help to Tara while she is at the new school. What made you decide to add him in as a main character?
Because I loo—oove complicated. And alex is definitely that. He also muddies the waters between Tara and Wes and I don’t think love is considered real until it’s tested. Plus, I think Alex is who tara would’ve ended up with had she been raised as a Hunter and never met Wes. So it’s sort of a “what could’ve been” scenario. (Not saying she won’t choose him now. Not saying she will. Read and find out.)

Tara is sort of forced to go to this new school by her mother and Wes. Why does Wes worry so much about her? I get he wants to protect her but is there something he is not telling her?
There are some things going on behind the scenes with him. He’s stressed about taking over as a leader of The Cause. It’s not going well for him at that point, what with being a Dirty Blood. Also, Wes has always known there will be trouble if the two of them get together. By sending her away, he’s delaying it some and he thinks he’s doing her a favor. Doesn’t mean he’s happy with the circumstances though.

At the end of Cold Blood something happens to Tara when she is defending herself. Will we get to see more of that in Blood Bond?
Um, yes. ß All I can say. ;)

Will Wes and Tara be able to keep the order together? We know Jack is hurt and recovering but will Wes put his differences aside and allow Tara to help him out?
Wes and Tara definitely grow together in Blood Bond. They both recognize their own shortcomings within the relationship and make a conscious effort to do better in those areas.

Will Tara fully embrace what she is becoming or will she feel like Wes as a Dirty Blood?
Hmm. Both, I think.

Where is your favorite place to write?
It used to be on my couch but this summer I hid out in my dining room so my kids could have the living room/TV. And even though school started last week, I’m still at the dining room table. Either way, I write at home. I get too distracted if I try to write in public. People watching= favorite pastime.

What inspires you write?
Situations. Asking myself “what if” about basically every situation I’ve ever encountered or heard about someone else going through. My stories are mostly character-driven but the story ideas themselves come from setting up a certain “world” or situation and then asking “what if the character chose/did this?” and then imagining the outcome. Also, hot boys inspire me. The ones in my head ;)

Can you give us one inside secret about Wes that we don’t already know?
Hmm. Well, this was sort of mentioned in Dirty Blood but you might’ve missed it. Wes likes to read. Specifically western novels. (Idk why. Maybe he imagines himself as a cowboy?)

Heather thank you so much for coming and sharing Wes and Tara and the gang with us! I just have to tell you I love Wes and Tara’s story and I never want it to end! I look forward to the next book. BTW is there a title yet? I know you are busy with real life again so you won’t have much time to write but I am anxiously waiting to read more from you. Thanks again and have a great day!

Thanks for having me! I am so lucky to have you on my street team! No title for book 4 yet. Still tossing it around in my mind. And real life is overrated, it turns out, so I’ll be getting back to work soon. But I have a couple of other projects to wrap before starting book 4. And I promise, you’re going to love them. Stay tuned!
Posted by Tee at 9/13/2012 06:37:00 AM

thanks for having me, Tee! This was so much fun!

Yes! Wesley is so damn Sexy!