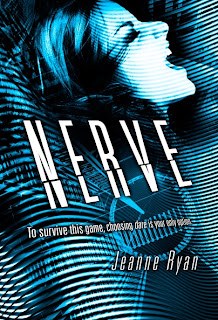 When Vee is picked to be a player in NERVE, an anonymous game of dares broadcast live online, she discovers that the game knows her. They tempt her with prizes taken from her ThisIsMe page and team her up with the perfect boy, sizzling-hot Ian. At first it's exhilarating--Vee and Ian's fans cheer them on to riskier dares with higher stakes. But the game takes a twisted turn when they're directed to a secret location with five other players for the Grand Prize round. Suddenly they're playing all or nothing, with their lives on the line. Just how far will Vee go before she loses NERVE?

Murders have plagued the woods in the past, making them a place of fear. Eighteen year old Wendy and her friends become worried when a new string of murders come to their high school. After a horrible car accident, Wendy returns to school, going from wallflower to popular overnight. As the murderer edges closer to Wendy she realizes things are changing. She is afflicted with nightmares that are all too real and she herself is undergoing unnatural changes. Learning the truth about her past, could be the key to saving her future.

HOLY BARNACLES!!!!!!!!! I am so so grateful to Around The World ARC Tours for allowing me to read an ARC copy of Nerve. To me Nerve was just like the game Truth or Dare.Vee is chosen to be a contestant on the Nerve game show. She is asked to go an do things that she would never normally do but they always say do you have the NERVE to do so and so and the contestant can say yes or no and if they say yes they can proceed to the next task. As the tasks get harder and more personal Vee is worried that something is not right.

The game knows all the contestants private stuff and asks them to do things that they would never have the NERVE to do in any normal situation. But as things start to get complicated and the game starts to change to deadly Vee and the other contestants must ask themselves if they want to continue or not. On the last NERVE they are all brought to a secret location and asked to do something dangerous. What will Vee and the other contestants do? Vee will have to decide just how far she is willing to go to get to the grand prize. Will she do it? Or will she fail?

Come along for the greatest mind thriller I have read this year. There are lots of twists and turns and there is even some romance in the book that is unexpected. Just when I thought the story was going on way it totally went the other way and threw me for a loop. In the end I was looking for more and wanted more no needed more but the ending was epic and I loved it all the same.Great read so go on out and get it because today id the release day 09/13/2012 so Happy Birthday NERVE!

I’ve lived all over the world, raised in a family with eleven brothers and sisters. I spent my early childhood in Hawaii and the rest of my growing-up years trying to figure out a way to get back there, with stops in South Korea, Michigan and Germany along the way. Before writing fiction, I tried my hand at many things, including war game simulation and youth development research. But I decided it was much more fun to work on stories than statistics.

These days, I still love Hawaii, but have found my home under the moody skies of the Pacific Northwest.

YOU CAN FIND JEANNE AT THE FOLLOWING PLACES
Twitter @Jeanne_Ryan and on my FB page: www.facebook.com/JeanneRyanAuthor

GIVEAWAY: (1) Signed Hard copy of NERVE. Open to US/Canada addresses
a Rafflecopter giveaway
FOLLOW ALONG THIS TOUR FOR SOME AWESOME REVIEWS, EXCERPTS AND PRIZES
http://atomrbookblogtours.com/2012/06/04/arc-tour-nerve-by-jeanne-ryan-and-dial-books/

Oh the author lives in my neck of the woods!

This sounds like an intense and thrilling ride! I can just see myself gripping the edge of my seat as I read. And it sounds so unique too! Thanks for the review Tee! I'm gonna go check out this book!

I think the book sounds really cool! I love your blog

OMG, Nerve looks incredible, I'm dying to read this now. Thanks for the review and giveaway!

Ethan in The Trap by, Indigo Wren is one of my favorite heroes! I loved him. The only thing wrong with the book is that it ENDED!! LOL I did not want to say good-bye. Maybe one day she will write a sequel or even a short story. (hint hint if she sees this. LOL)
Thanks for the contest!!!!!!!!!!!
prettyunicorn78@yahoo.com