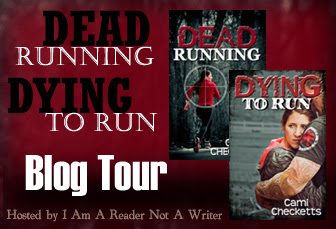 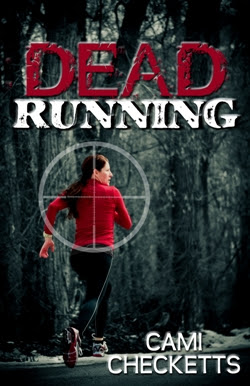 Running from the mercenaries who killed her parents.

Running from a scheming redhead intent on making her life miserable.

Running from painful memories that sabotage her dreams of happiness.

With two very tempting men competing for her attention, she hopes she'll finally have someone to run to, but can she trust either of them? When secrets from her past threaten her family, Cassidy decides to stop running and fight for her future.

Dead Running By Cami Checketts is a FANTASTIC read! First I have to say that I love running. I did track and field through junior high and high school and I love to run. Running is something I still enjoy and do everyday when I can. Dead Running is so captivating right from the first page until the end leaving you needing and wanting more.

Dead Running is a complex story about a girl named Cassidy Christensen who has a not so nice life. Her parents were killed and she is all alone. She has no one but she remains strong and steadfast. She will do what ever it takes to survive and she does. She decides she will run a marathon but there is just one small problem and that is that she has never run a marathon before. She knows she will have to train and build up her endurance. That is when things get a little complicated for her because she has two guys who are willing to train her.

Damon is a runner and knows he can help her train. He likes her but he comes with some secrets. Then there is Jesse who is the persona of bad boy extraordinaire who is there for her whenever trouble seems to find her. Is he hiding something to? If these crazy feelings are not enough to contend with she is being stalked by a girl who is obsessed with Damon. What is she going to do? Who is hiding secrets and who is telling lies? Will Cassidy ever be able to stop running from the problems and the nightmares she lives with everyday? What will happen to her? Will she be able to finish the marathon?

This is a must read full of action and suspense and just the right amount of a love triangle. 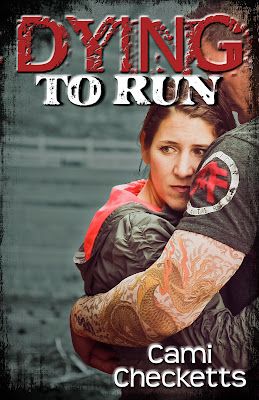 Captured by the traffickers who killed her mother, her only hope is Dr. Tattoo, a man she loves but nobody trusts. When she finally gets a chance to run, someone else she cares about is taken. Running might be her only chance at survival, but she won’t allow another family member to be killed in her place.

This must-read sequel to Dead Running will have you laughing, biting your nails, and hoping for more.

In this most anticipated sequel to Dead Running Cami Checketts stepped it up a notch and brought this one home. I have to say that I was at the edge of my seat the entire time thinking what the hell happened. Man the person I thought was bad was not and the one I loved and wanted her to be with was the one that was bad. Lord how Dead Running ended was crazy!

With gun shots ruining the marathon and Cassidy on the run again what is a girl to do? She is staying with her Nana and when she tries to warn her that trouble is coming Cassidy never thought that trouble would be in the form of someone she cared about and trusted. Cassidy trusted Damon and he turned out to be something else. Not to mention she is still being stalked by the girl who loves Damon. So when Damon comes to the house to kidnap her she fights. It is not enough but she fights him. All Cassidy can think about is how much she loves Dr Tattoo and needs him but she does not want anymore of her family members hurt.

Cassidy has finally found out the truth and she realizes that things she was told were not true. They want her father and will stop at nothing to get him. Who is she to trust? How can she figure out who is telling the truth? Who will she be with in the end? Will it be Damon or Jesse or Dr Tattoo or someone else altogether? Man this is an EPIC sequel to a series! Thank you Cami for a great read!

"I expect to pass through this world but once; any good thing therefore that I can do, let me do it now; for I shall not pass this way again." S. Grellet

I always get excited this time of year. I make all kinds of goals and plans: To eat healthier and exercise harder. To meet my writing goals. To clean my house (no, not really, that's still way down the priority list).

"Never put off till tomorrow what you can do today." Thomas Jefferson

It's great to make goals and to plan for tomorrow, but we need to live for today. I love having lofty goals, but to be effective in accomplishing those goals I try to break them into easier, daily tasks. I also like to write them on the calendar so I know what I need to accomplish today.

Today I will make a healthy dinner for my family and resist chocolate (oh, the torture). Today I will revise five pages of my manuscript instead of check out Facebook posts during computer time. Today I will get out of bed when my alarm goes off, drive to the gym, and not come home until I sweat. Today I will go visit my adopted grandma. Today I will respond with patience and love when my two-year old is flailing on the ground screaming for a donut (that only happened twice so far).

It’s easy to get overwhelmed if we think we have to do everything perfectly for the rest of our lives, but if we can take it one day at a time it seems more manageable. If anyone told me I could never have a bowl of chocolate ice cream covered with fudge again I'd probably eat ten bowls to stock up on the sensation, but if I just tell myself that I'm not having a bowl today but on Friday I can have a treat, I don't go quite so crazy.

The other day in the grocery store, the young man at the deli counter handed me my meat. I mumbled, "Thanks. Have a nice day." He grinned and said, "No. You make it a great day." We each have a choice. We can choose to make it a great day or we can choose to become bogged down with frustrations, offenses, and a to-do list that we can't accomplish.

Today is the gift we have been given. For some there might not be a tomorrow. That might sound negative, but it's a reality we have to face. Savor today like it's your last bowl of ice cream. Accomplish the things that are important and love the ones you're with. 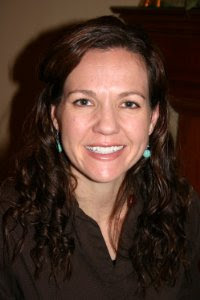 Cami Checketts is married and the proud mother of four future WWF champions. Sometimes between being a human horse, cleaning up magic potions, and reading Bernstein Bears, she gets the chance to write fiction.

Cami and her family live in the beautiful Cache Valley of Northern Utah. During the two months of the year it isn't snowing, she enjoys swimming, biking, running, and water-skiing.

Open only to those who can legally enter, receive and use an Amazon.com Gift Code or Paypal Cash. Winning Entry will be verified prior to prize being awarded. No purchase necessary. You must be 18 or older to enter or have your parent enter for you.

The winner will be chosen by rafflecopter and announced here as well as emailed and will have 48 hours to respond or a new winner will be chosen. This giveaway is in no way associated with Facebook, Twitter, Rafflecopter or any other entity unless otherwise specified. The number of eligible entries received determines the odds of winning.

Giveaway was organized by Kathy from I Am A Reader, Not A Writer http://iamareadernotawriter.blogspot.com and sponsored by the author. VOID WHERE PROHIBITED BY LAW.

Thank you! I can't tell you how much I appreciate your wonderful reviews.
Hugs,
Cami