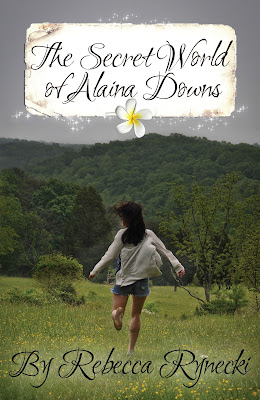 When Alaina stumbles into a world that she only thought existed in her mind, she is understandably a little bit freaked out. Who wouldn't be? Characters that she had written down years ago are walking, and talking, and telling her that she is the only one who can save the princess and the kingdom of Isleen. Um...okay. As she travels down to the southern kingdom with Sir Gabriel, a really hot knight, she falls off horses, has an interaction with an evil witch, gets attacked by a sea creature, and even falls from lust into love. 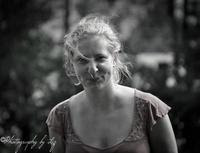 About the author:
A graduate of Hollins University in southwestern Virginia, Rebecca now lives in the hills of Connecticut with her husband and young son. When she's not working as a librarian or plotting out the sequel, she bakes, dances around the house...and sings...really badly. The Secret World of Alaina Downs is her first book.

She took a deep breath, and dove in. She pushed her feet off the soft sand on the bottom, and reemerged, gasping loudly. “I think the water may be a little too cold!”

“Hmm, I can tell.” Gabriel's eyes trailed down to where the thin garment clung to her skin.

“What?” Alaina gave a quick glance down. “Oh, shit. You know, Gabriel, I really don't think that now is the best time for you to be noticing stuff like this. I mean...Gabriel? Gabriel? Are you even paying attention to me?”

“Don't move,” he hissed. He shook his head. “No. I mean, I want you to move, just...very slowly.” Gabriel's skin had paled; his eyes wide as he stared behind her. “Let me get my sword, and-”

“Sword? What are you talking about? Is that anti-unicorn thing behind me?” she joked.

“Those creatures don't live in the water.”

“What is it?” Alaina asked, her voice trembling.