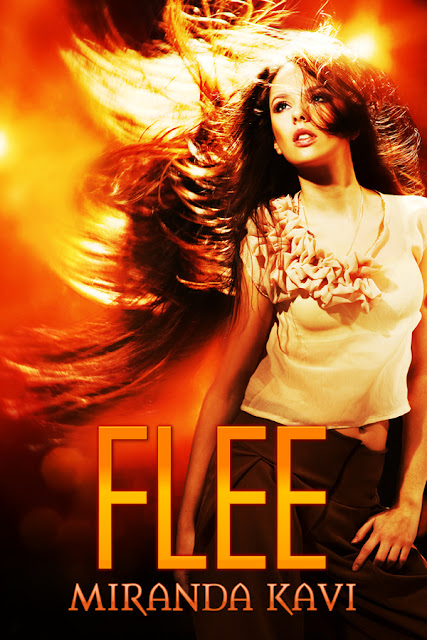 I have to keep it a secret.

Everything was fine, until I met him.

I can’t stay away…

Aurora Lockette has a supernatural ability she hides from the world. Gavyn Dhaval is a newly famous actor that shies away from the spotlight. When Aurora and Gavyn literally collide in a fender bender on her first day of law school, they are irresistibly drawn to each other.

When Aurora’s secret is revealed, she has no choice but to abandon Gavyn to go into hiding to escape the media frenzy. A secret society of gifted humans contacts her to warn of dark forces that seek to destroy her and everyone she loves.

Aurora must try to understand who and what she is while she fights to protect herself and her loved ones from a hidden, sinister force.

Flee by Miranda Kavi is an EPIC read!

Flee is one of those books that makes you shut out everything around you just so you can read. Flee is a story about a girl Aurora who has a special gift. She has kept this secret from everyone and plans on keeping it that way. She lives her life just like any normal person except that she can fly. Aurora is very shy and when she has a fender bender with Gavyn she is struck by him. But Aurora knows she has to stay away from him. The only thing is she can't stop thinking about him.

This is a great story. It has some many emotions going on at once and to see Aurora and Gavyn build their relationship and try to survive the evil that lurks in the background. I will definitely be reading more from Miranda Kavi. She is the next indie author to follow!

Miranda Kavi is a YA and Paranormal/Urban Fantasy author. She has worked as an attorney, an executive recruiter, and an assistant in a biological anthropology lab. She loves scary movies, museums, and is hopelessly addicted to chocolate. She lives in the Houston area with her husband and daughter.